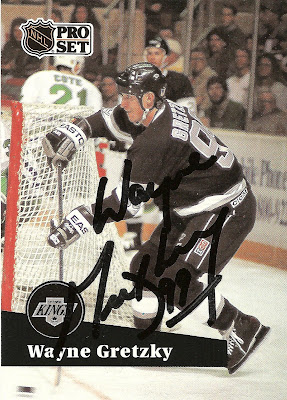 With the 2007-2008 NHL season likely to end tonight in my opinion (I hope I'm wrong as I was really looking forward to a high-scoring 7 game series between the Wings and the Pens), it seems only right to continue with the hockey theme for this month's Card of the Month.

I don't think it was possible for a kid who began playing hockey at age 5 in the late 80s not to become a Wayne Gretzky fan. Most hockey fans will tell you that he is the best to ever play the game, and it's hard to argue against that. Wayne finished his career with the most goals, most assists and most points (by almost 1,000!) of all time. He led the Edmonton Oilers to 4 Stanley Cup championships within a 5 year period, is the only player to ever tally 200 points in a season (a feat he accomplished an astonishing 4 times) and is the only player in NHL history to have his jersey number retired for all teams! Very few athletes in history have dominated their sport on the level that Gretzky did.

As a 9 year old, I had been collecting hockey cards for a year or two when I decided I would send the Great One a letter containing a 1991 Pro Set card in search of an autograph. I wrote my letter out, asked my mom for a ride to the post office, and dropped the envelope in the mail, fully expecting never to see the card again. A few weeks went by, until one day I arrived home from school to find an envelope addressed to me in the day's mail. My jaw dropped when I opened it and found a letter from Wayne inside. Folded inside the letter was my Pro Set hockey card with a huge signature (including #99) right on the front. The letter was nothing great, I'm sure it was the same exact letter hundreds of other fans received back in the mail, but nonetheless I've always been thankful that Wayne Gretzky took the time to sign my card.

Looking back on it, there are a couple of things that really amuse me about this card. First of all, I chose a Gretzky card with an awful lot of black on it, especially considering most athletes sign in black sharpie. This was a calculated decision though, as I didn't own many Gretzky cards and this particular card featured a photo where Wayne is facing my favorite team, the Hartford Whalers. Luckily, the signature is dark enough that it shows through pretty clearly on the card. Secondly, I sent the French version of the card (Pro Set issued English and French-Canadian versions of their hockey cards). This was also a calculated decision. Obviously the English versions were more valuable to me so I decided to send the French version in case the card never made it back to me. Pretty amusing that I was too nervous to send a Pro Set hockey card (which literally is not worth the cardboard it's printed on) in the mail.

These little quirks just make me love the card that much more though. Any time I look at it I laugh and recall some really fond memories from my youth. This is the only card I've ever sent out to a player in the mail to be signed, and it's also the only card in my collection that I will absolutely never part ways with...

Posted by shoeboxlegends at 11:20 AM