The 2007-2008 NHL season came to a close last night as the Detroit Red Wings downed the Pittsburgh Penguins 3-2 to win the Stanley Cup finals (their 4th cup title since 1997). While I have to admit that I was rooting for the young underdog Pittsburgh team, Detroit has a few veterans that are still around from my first go as a hockey fan in the late 80s/early 90s, and it was fun to see some of them win another Cup.

As an impromptu tribute to the hockey team from the motor city, here are a few random Red Wings cards I was able to find and scan in my early morning stupor before leaving for work today.

Team captain and veteran NHL defenseman Nick Lidstrom has been a member of the Wings for each of their 4 recent championships: 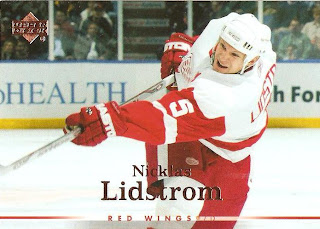 Kris Draper was relatively quiet during the series, but he was deemed scan-worthy because he's been around for a long time and has also been on the Wings for the last 4 championships: 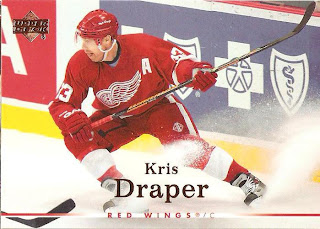 Dominik Hasek isn't quite as acrobatic in net as he was in the 90s, but he's still a reliable goaltender. Although he didn't see any action in the finals, he did split goaltending duties during the regular season for Detroit and will still have his name inscribed on the Stanley Cup: 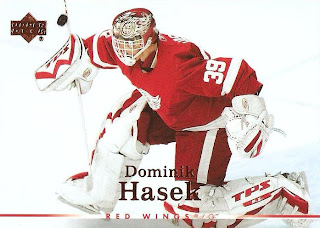 Chris Osgood was outstanding this post-season, posting shutouts in the opening two games of the finals. Not to mention, he posted those shutouts while wearing the odd-style goalie helmet that he's worn since coming into the league (as exemplified in his 1993-1994 Parkhurst rookie card below). Even though Chris became the second goalie to score a goal in the NHL against my beloved Hartford Whalers, he obviously deserves mention here: 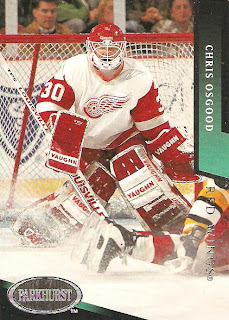 Finally, one of the younger faces of the franchise, and this year's Conn Smythe Trophy winner for playoff MVP, Henrik Zetterberg. Based on the way he played this season I think it's obvious that he's going to be one of the NHL's top scorers for years to come: 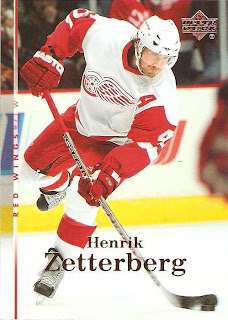 On a side note, I think this year's Upper Deck hockey release looks outstanding. Great, high quality action photography and a simple layout just like the baseball set (which is better than '08 Topps baseball in my opinion). I'm only about 40 cards short of the set, if you have any that I need I will make a trade worth your while.
Posted by shoeboxlegends at 9:57 AM