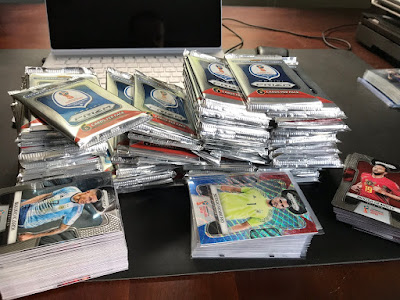 I don't often swear here on the blog, but I think you may forgive me for the post title and agree that the eBay flip I'm covering today warrants it.  As you may know if you've frequented this blog earlier this year, I've done a good deal of eBay flipping while stuck in quarantine in 2020, purging some cards I'm not necessarily in love with in order to procure some that I am.  Today's flip may take the cake as my single best yet, though...
This starts off as a soccer card post, but morphs into something very different, so stick with me for a couple of images if you don't mind, especially if you enjoy really old baseball cards!
The image up at the top of this post is a big old lot of packs of 2018 Panini Prizm World Cup soccer.  I really got into the international tournament in that summer of 2018, and was able to score a huge stash of well over a hundred loose packs at a price point that worked out to just a buck and change per pack.  My goal was to try to complete a 300-card base set, and maybe land a cool parallel or two.  Fast forward a couple of years, and this worked out to something much greater than that. 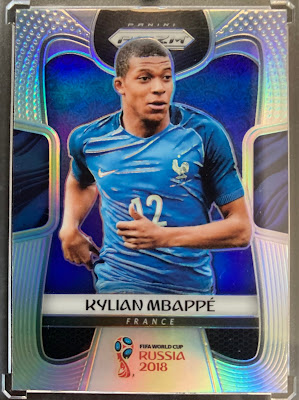 About halfway through ripping the packs in the fall of 2018 I came across this, the Silver Prizm parallel of Kylian Mbappe's card.  For those who aren't Panini collectors, the Silver Prizm is akin to the standard Refractor in the world of Topps Chrome.
Now, Mbappe was the biggest name in the set, and I knew this was a good pull at the time.  I was happy to land any parallels of his from my break, but these Silver Prizms were by far the most plentiful and easy to pull of the various parallel cards in the set.  Because of that, I didn't necessarily realize that this would be a high dollar value card.  I put it in a penny sleeve only, stuck it in the small shoebox that holds my soccer collection, and promptly moved on with my collecting and forgot about the card.
Well, when cards in general just went bananas as far as value here in 2020, I stumbled across this one while sorting and decided to take a look at what it might be worth.  Let's just say that I was astounded.  Even though they are more common than some of the other un-numbered parallels in the set, it turns out these Silver Prizms are probably the most highly-collected of the parallels.  It became apparent in short order that I could sell this card, pulled from a pack that I paid just a dollar and change for in 2018, for hundreds of dollars.  Many hundreds in fact.
I went ahead and did exactly that, and unlike some of the other flips that I've featured here on the blog I used the sum of the proceeds to grab just a single baseball card for my collection.
I know what you're thinking...that must have been one hell of a baseball card!
Well, it certainly was.
Ready?
Check this one out! 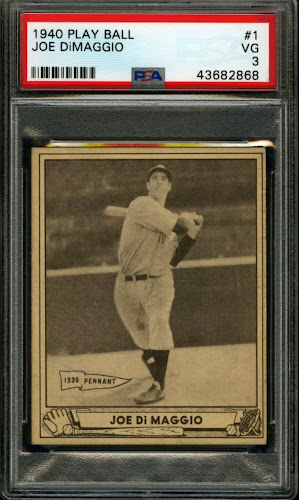 OH.  MY.  GOD.  This transaction took place a couple of months ago now, maybe longer, and to this day I'm still in a state of disbelief when I take this card out and look at it.  A real, authentic, playing-era card of the Yankee Clipper!
In just 13 MLB seasons, Joe won three MVP awards, was an All-Star in every season, won ten AL pennants and nine World Series titles.  None of those accolades are even what he's best remembered for, which is just insane.  That honor goes to his incredible 56-game hitting streak, accomplished the season after this card was printed up.
Joltin' Joe was always one of those few players who, even though I absolutely love vintage baseball, I figured I'd never be able to acquire a playing-era card of.  Right there with names like Ruth and Gehrig, guys who are absolute legends of the sport, but that owning playing-era cardboard of seems like a pipe dream at best.  Thanks to a lucky pull, and the most insane secondary market for sports cards I've seen in my lifetime, this dream became a reality earlier this year.
The card itself, aside from being a freakin' Joe DiMaggio, is just great.  I love the old school Play Ball sets, and they picked an appropriate subject for card #1 in their 1940 release here.  Just an awesome shot of a stoic DiMaggio swinging for the fences while he looks off into the sunset.  I wanted this version in particular, because it's got amazing visual appeal, especially for a PSA 3 slab.  If you look closely, there is a surface crease running from about a quarter of the way up the left side, through the '1939 Pennant' logo, which is probably about the only thing keeping this card from being a PSA 5 or 6, quite honestly.  A real beauty! 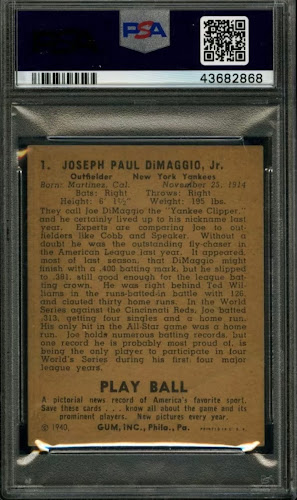 A nice, clean back here, with no paper loss or other issues to speak of.  The write-up is fun to read just because this was so early on in Joe's esteemed career.  Already it was obvious that he was a legend though, as the back of the card notes he was the first player in history to participate in the World Series in each of his first four MLB seasons.

So yeah, what more can I say?  I'm still in stunned disbelief that an un-numbered, non-autographed soccer parallel pulled from a pack of relatively low-end 2018 product funded an authentic Joe DiMaggio!  That's just the crazy world we are residing in as far as this hobby goes in 2020.  We've got a few months to go, but I have a hard time imagining anything but this card being selected as my best overall addition in my annual year-end countdown in December.
Have you done any selling or flipping like this yourself, on eBay or otherwise?  If you had a big pile of "hobby fun money" to use like this, would you target one big card like I did here, or a bunch of little ones?  I'm curious to hear your thoughts!
Thanks as always for stopping by, I'm going to go back to staring at this one with a stupefied smile on my face now...

Posted by shoeboxlegends at 11:40 AM

Fantastic flip! You're making me wish I collected soccer cards lol. That Joe D is a gem!

Great job with that flip!

I have no idea who that soccer dude is so I'm just amazed.

Those are the best trades/flips. Sending something totally irrelevant to your collection for a crown jewel. And the crease just makes it reasonably affordable. A pristine one would look fake. Yours has character.

You, sir, are a collecting god.

I'd probably try to get a few cards from the next tier: Mays, Aaron, Mantle, Koufax, Schmidt's second-year.

Awesome! I'd probably target a bunch of cards rather than one at this point, but obviously going after one big card can be quite satisfying. Yours is a case in point.

I kinda sorta flip in that I send unwanted cards to COMC and then buy cards with the credit... but the best I've ever done was about $70 for a Clayton Kershaw insert... and I didn't really flip that into one big card, I just bought lots of cheaper ones.

WOW! I'd comment a million exclamation points if I could!

Forever ending the question of "Where have you gone, Joe DiMaggio", we now know...

Always nice to get a vintage card for the collection. A Joe DiMaggio at that. Very nice card and having it slabbed to protect even.