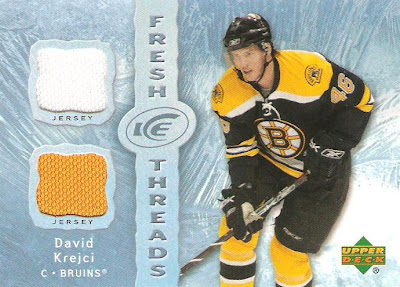 As most NHL fans know, the Bruins got off to an absolute tear this season, propelling themselves into the #1 spot in the East fairly early on and holding that position ever since. A defense solidified by the addition of Dennis Wideman and anchored by likely Norris Trophy winner Zdeno Chara and the outstanding goaltending tandem of Tim Thomas and Manny Fernandez was one of the best in the league, stumping opponents night after night.


The offense was sparked by Marc Savard and a fresh crop of developed talent including youngsters like Phil Kessel (who was competing for the league lead in goals in the early going) and David Krejci (whom I've posted about a couple of times before after he quickly became one of my favorite modern players). There was a stretch near the end of 2008 where the Bruins seemed almost unbeatable.


In recent weeks, as is often the case at some points during an exhausting 82-game NHL season, the Bruins have hit a rough patch. A really, really bad rough patch. A 4-wins-in-your-last-15-games rough patch. The defense has been solid, but not spectacular. The offense has all but completely stalled, even with the addition of veteran goal-scorer Mark Recchi at the trade deadline. Thanks to some awful play by Manny Fernandez the goaltending tandem has basically been replaced by Tim Thomas alone.


The Bruins host the Ottawa Senators tonight, a team they have dominated all season. With New Jersey threatening to overtake the B's in the East, they desperately need their young scorers like Lucic, Kessel and Krejci to net some pucks. Hopefully this David Krejci card will turn out to be a case of foreshadowing and he'll notch a couple of assists tonight. Go Bruins!
Posted by shoeboxlegends at 7:03 PM

Not a huge win this afternoon, but 2 points nonetheless. NJ won too. Here's hoping Krejci picks it up again for the stretch run.