Another Pack of Champs

Upper Deck Champs hockey was released earlier this week. Somehow this set flew completely under my radar. Now that I finally found a local hobby store with a decent hockey selection (bonus points for being located inside a local hockey rink), I decided to pick up two hobby packs in order to evaluate whether to sink $100+ into a hobby box. I posted the first pack on A Pack a Day yesterday, here's the second: 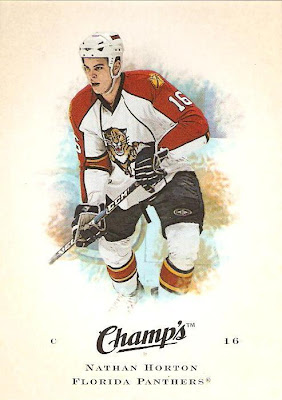 #64 - Nathan Horton - Florida Panthers - The Panthers are desperately seeking a playoff spot, they currently sit just out of the picture, one point behind 8th place Montreal in the East. If they fail to make it you have to wonder if they would've been better off dealing Jay Bouwmeester at the trade deadline in order to acquire some talent for the future (since he's likely going to walk at season's end). 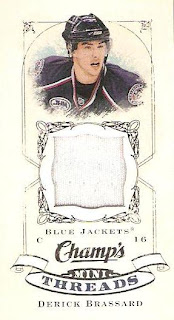 #CT-DB - Derick Brassard - Columbus Blue Jackets - Mini Threads - I guess I should be happy pulling a mini relic card, but it resulted in this being just a 3 card back. Not to mention Derick hasn't seen any NHL action since back in 2008... 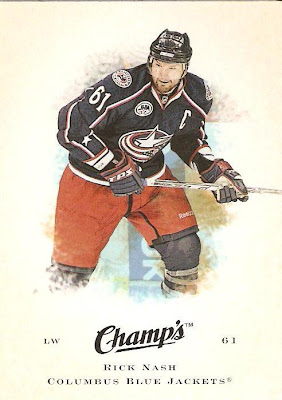 #81 - Rick Nash - Columbus Blue Jackets - This would've been a good pack for a Columbus fan (are there any of those out there?). Nash appears posed to set a new personal high for points in a season, as he sits just 2 points behind his previous high with 10 games to go. He's a big part of a Columbus team that actually looks like it's going to make the playoffs for the first time in franchise history. Maybe there will be some Columbus fans out there after all after this season.

I like this stuff, I really do, but I'm going to hold off on a hobby box at the moment. You are guaranteed 2 mini signatures and one mini relic per box, but most likely they would end up being on a par with the Brassard card I pulled in this pack. At around $110 for 122 cards the price is just a bit to steep for me. I don't need another set to collect at the moment either, as I still need to finish O-Pee-Chee, UD Legends Masterpieces and Upper Deck Series II from this year. I'll probably try to pick up some cheap singles on eBay.

Posted by shoeboxlegends at 7:37 PM

This is a nice looking set, but I'd have to agree its a bit pricey for 3 cards per pack. I like the original design though.

after actually seeing the cards i was less than impressed by their price point. a number of the cards have old school, furry '70's opc edges to them. for $115 hobby boxes, it would be nice to see consistently clean cards. or is that too much to ask?

This looks like a nice set, but WAYYY to expensive. Works out to almost a dollar a card; if I wanted to pay a buck per card on cheap stock I'd rather buy a pack from the 80's and have a shot at an Yzerman or Roy rookie.