I think most collectors have a guilty pleasure. That set that most people find ugly as sin, but you just can't help but love. For me, that set is 1990 Topps baseball. Generally regarded as one of Topps' worst designs, this 792 card monster has plenty of negative aspects. No name players you've never heard of? Check. Horrible multi-color distracting borders? Check. Healthy dose of grainy, low quality photography? Check. Nonetheless, this is the first real baseball set I ever collected in large amounts. In fact, I think my brothers and I bought more of these cards than probably any other during my childhood collecting days.

The recent trend of beautiful weather has the grass on my lawn turning green and plants and trees budding. Couple that with the lackluster play of the Bruins lately, and I'm getting in the mindset for baseball season. To get myself hyped up for another season of MLB action, I've decided on a little project for myself. I'm going to organize my 1990 Topps set (I've got probably 2,000 cards at least, I'm sure I've got a full set). I'm going to scan in every last card and highlight my favorites here. Since the set is so large, I'll be breaking it down into 8 posts. Tonight we start with cards 1 - 99: 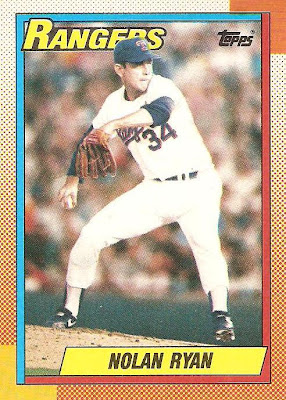 #1 - Nolan Ryan - The set starts off with Nolan Ryan's base card. Ryan was one of 3 players I collected in my first go-around (Will Clark and Cal Ripken Jr. were the others). In my 7 year old mind, there was no better way to start a set than this... 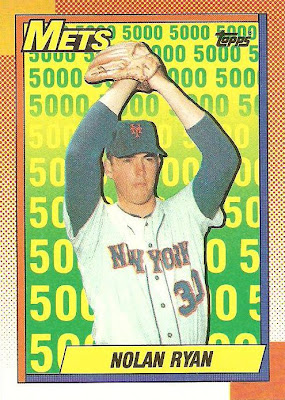 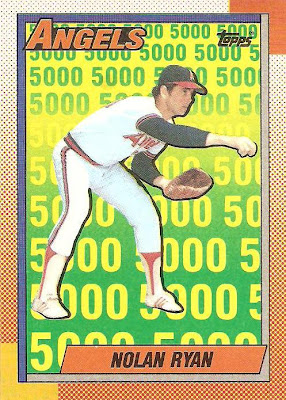 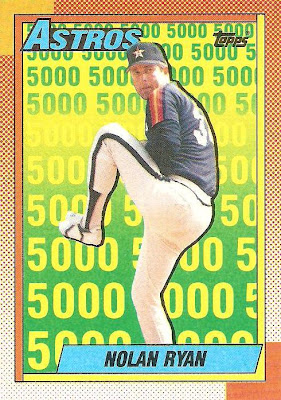 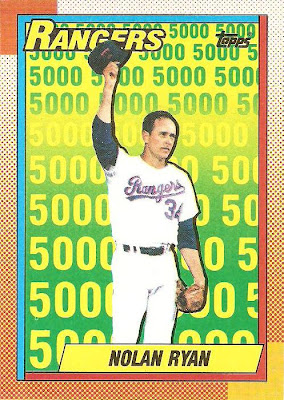 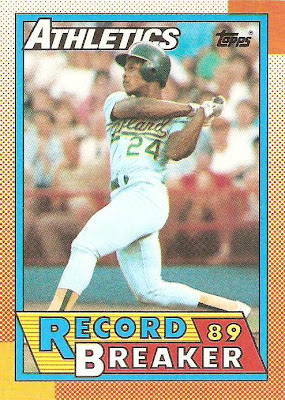 #7 - Rickey Henderson - Record Breaker - Cards 6, 7, and 8 were Record Breaker cards. Henderson gets a card for belting 40 career leadoff homers, surpassing Bobby Bond who had the previous record with 35. 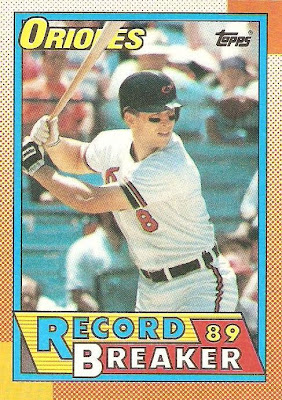 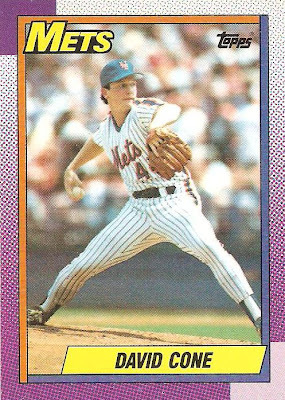 #30 - David Cone - I wanted to show this card because I think it's an example of how these crazy borders actually randomly get it right sometimes. The purple outer border and solid orange inner boarder look great paired with a Mets jersey. 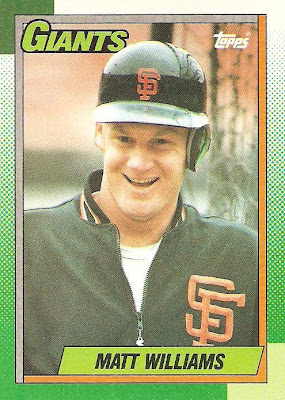 #41 - Matt Williams - This one has always been a favorite of mine. 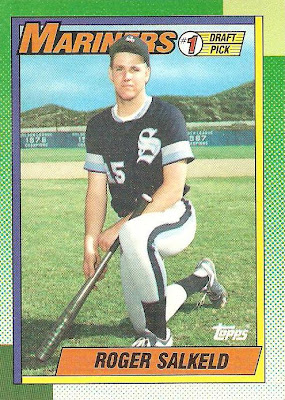 #44 - Roger Salkeld - #1 Draft Pick - It seems like Topps tried to cover anyone and everyone when it came to rookies in this set. How did Roger Salkeld fare in the Majors? Just 45 appearances over 3 seasons, and a career 5.61 ERA. The best part of this card is the back though: 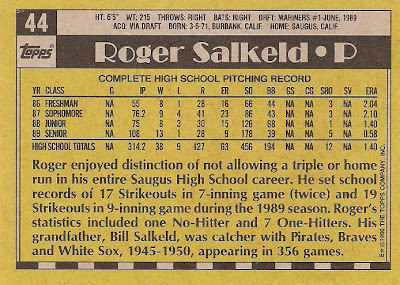 This guy literally got a card in the base Topps set directly out of high school. You don't see Freshman, Sophomore, Junior and Senior on the back of cards too often. Salkeld was taken #3 overall in the '89 draft, 4 spots ahead of Frank Thomas! Nice going Seattle... 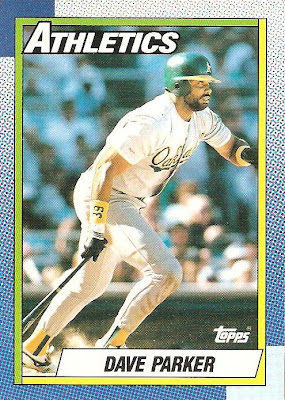 #45 - Dave Parker - I love that Parker follows Salkeld on the checklist. Talk about opposite MLB careers. Look at the back of Dave's card: 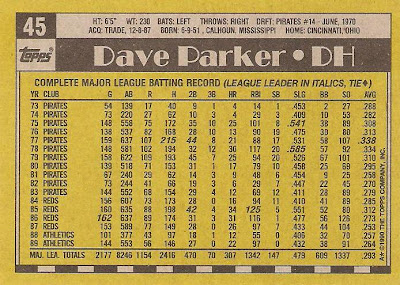 Another thing I love about 1990 Topps, full stats! 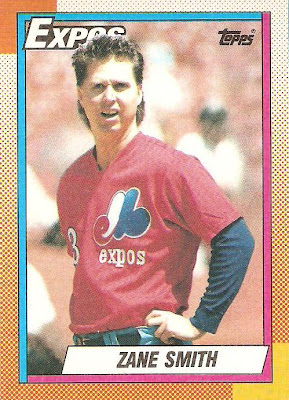 #48 - Zane Smith - This one was picked because it's an example of when the design doesn't work. Plus, the mullet is great, the expression is great, and the Expos jersey is great. 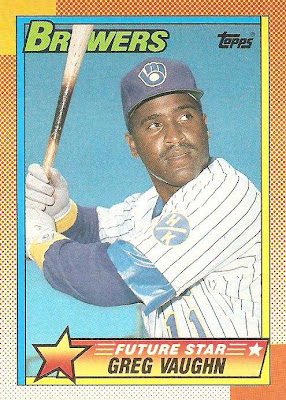 #57 - Greg Vaughn - Future Star - Mo's cousin did one thing well, hit the long ball. But that's probably because he was swinging for the fences every at bat. He has one of the worst strikeout to walk ratios of all time. He once hit 50 homers, but that was 1998, which makes me wonder. Sorry, I'm cynical sometimes... 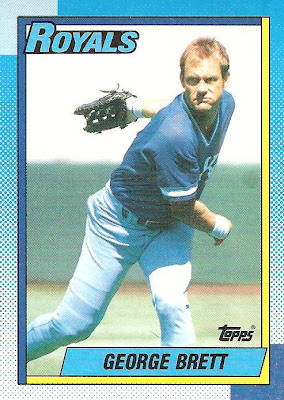 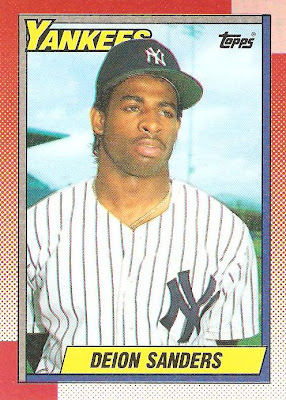 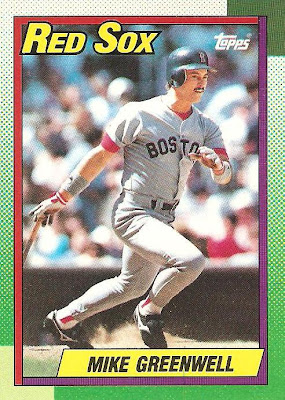 #70 - Mike Greenwell - Mike was one of my favorite Red Sox as a kid, largely because he had a great game the first time I ever attended in person at Fenway Park. 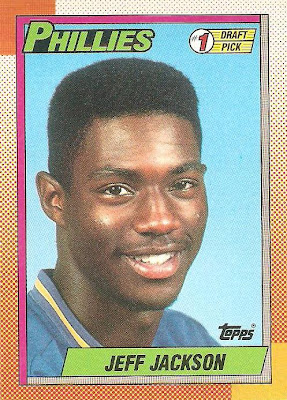 #74 - Jeff Jackson - #1 Draft Pick - Jackson was the 4th overall pick in '89, right behind Roger Salkeld. He would never play a single Major League game. He does have a Topps card though! 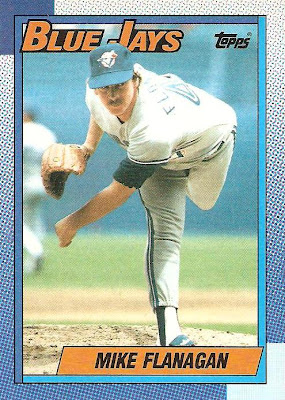 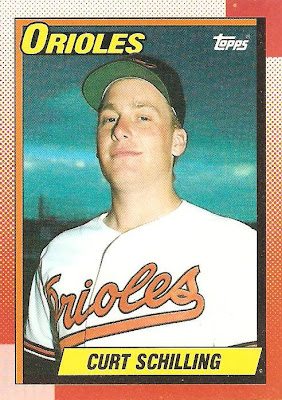 #97 - Curt Schilling - Before Curt had the "bloody sock incident", or the World Series Championships with Boston and Arizona, he was a pudgy young pitcher for the Orioles. I'm not sure if this would qualify as one of Night Owl's night cards.

Well there you have it, my favorites from the first 99 cards of the 1990 Topps set. Post #2 coming soon!

Posted by shoeboxlegends at 9:05 PM

Wow great post. I have this set. You have made it look 10 times better now in my eyes.

PS. Look at the scowl on George Brett's face, I never noticed that before. Deion never looked better

I do like the Brett card for the reasons you mentioned. But the rest of the set ... bleah.

Thanks for the comment John, I'm glad I could inspire at least one other person to enjoy the set! I hope you enjoy the rest of the posts.

Night Owl, I certainly can't blame you either though. Like I said, I think I am likely biased here given that this is the first set I collected in bulk.