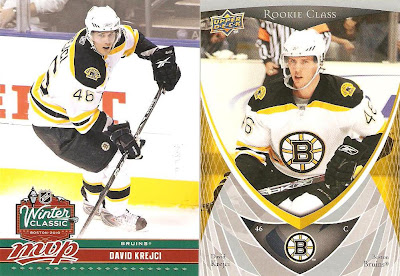 Had to sneak in tonight's David Krejci post just before faceoff! David has notched 2 goals since I posted last, the most recent coming in Tuesday night's game against the Carolina Hurricanes. This works out perfectly for me, as Justin G recently sent me these two Krejci's, neither of which I had. Thank you Justin!

As far as tonight's game goes, I hope the pressure of the fans' expectations to get even with Pittsburgh doesn't get to the players. I hope the B's keep in mind that the best thing that could come out of this game is 2 points in a tight Eastern Conference playoff race. As long as that's the goal first and foremost, then I wouldn't mind seeing someone get even with Cooke. What I don't want to see, and what I find ridiculous, is someone going after Sidney Crosby or Evgeni Malkin. These cheap shots are a problem in the league this year, we don't need to see any more of them. It was Matt Cooke who made a bad decision, not Crosby. I'd like to see some physicality, but I think there is a middle ground that will please both the fans and the league officials who will be in attendance.

In any event, here's hoping it's a great game regardless of the outcome!

I have some series 2 UD for ya.