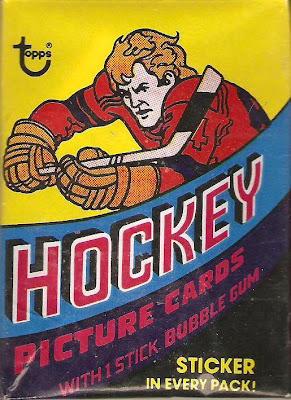 Let me just start by saying that the designs used on vintage wrappers, at least for hockey and baseball, are fantastic. I mean look at that wrapper! I wish Topps or Upper Deck would release just one set that contains no game-used or auto hits, is printed on cardboard stock like the older sets were, and came packed in traditional wax wrappers. I know, not likely to happen anytime soon. It's a shame. Alright, moving on here I recently picked up a wax pack of 1978-79 Topps hockey at the hobby shop I just discovered. This blog's been all baseball lately and I thought it would be cool to open a pack of hockey cards that's older than I am. I did the same thing a while back with 1977-78 Topps for A Pack a Day. Let's see how this pack does. 12 cards and 1 sticker included, I scanned each for your viewing pleasure: 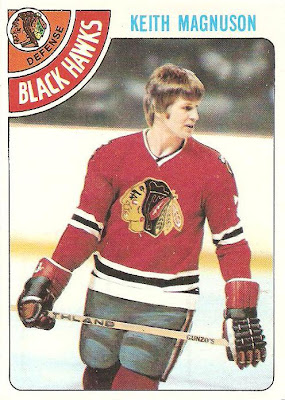 #34 - Keith Magnuson - Magnuson was a Blackhawk his entire career, and had his number retired by the team not too long ago. He was in the twilight of his career in 1978-79 though, appearing in just 26 games. He would appear in just 3 the following year, which would be his last. I suspect this photo was from at least a couple of years earlier though, as Keith was team captain from 1977 to 1979 yet is missing the C on his jersey here. Sadly, Magnuson was killed in a drunk driving accident in 2003. He was a passenger in a vehicle driven by former NHL player Rob Ramage, who was charged in the accident. It's actually kind of creepy that I pulled this card now as Ramage just began serving a 4-year prison sentence last Monday. 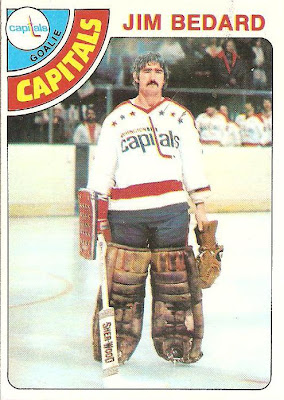 #243 - Jim Bedard - It's a shame this card came so early in the pack, because it sets the bar pretty high. Even though he's a no-namer who actually logged little time in the NHL and played the bulk of his career over in Finland, this card is awesome. Judging from the players on the bench and the crowd in the background, it looks like this picture was taken during the National Anthem perhaps. What an awkward card... 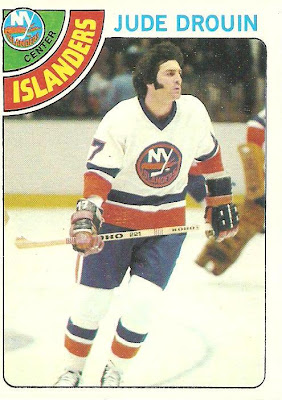 #93 - Jude Drouin - Jude has no stats for 1978-79, and if you can believe Wikipedia it's because he was so disgruntled with his declining role and lack of playing time with the Islanders that he chose to sit out the entire season to become a free agent. He's got some killer sideburns though... 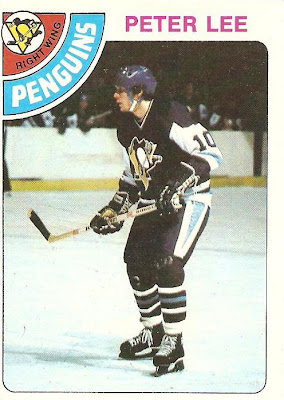 #244 - Peter Lee - Here's a random fact about Lee...he held the Ontario Hockey League career goal record for over 33 years. Do you know who broke it? John Tavares, back in 2009 before joining the New York Islanders in the NHL. 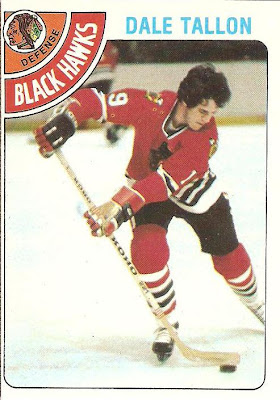 #146 - Dale Tallon - Pretty cool, I think this is my first card of Tallon, the new General Manager of the Florida Panthers, and the guy largely responsible for constructing the current Stanley Cup champion Chicago Blackhawks team. 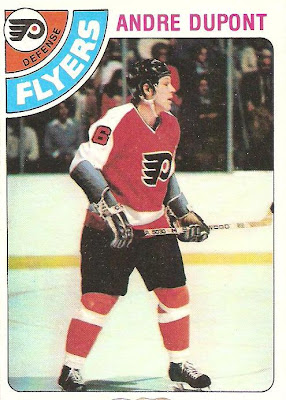 #98 - Andre Dupont - Dupont was a rough but solid defender for the Broad Street Bullies Flyers teams of the 70's. It was not out of the ordinary for him to log 200+ penalty minutes in a season. 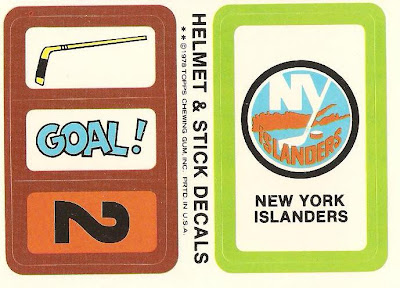 Team Sticker - New York Islanders - Each pack contains a single sticker insert, which actually contains 4 stickers within, a larger team sticker and 3 smaller hockey related stickers. I would love to pick up more of these. The Whalers weren't part of the NHL yet, but I'll have to pick up a Bruins one. 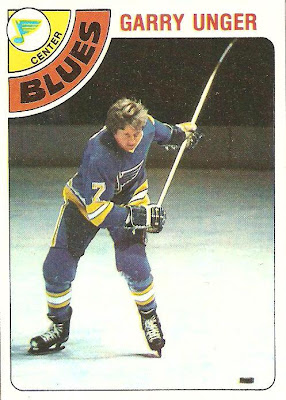 #110 - Garry Unger - Garry was a serviceable player for a long time at the NHL level, and at one time was hockey's iron man, setting an NHL record with 914 consecutive games played between 1968 and 1979. 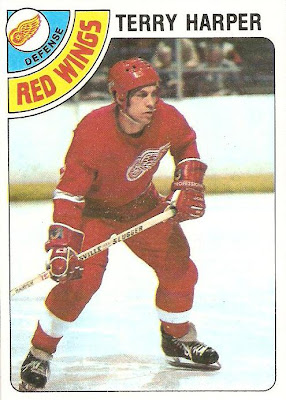 #214 - Terry Harper - I don't have much to say about Harper, so I'll talk about the design of the cards instead. The set is simple enough, with team logo and position in the upper left corner, and team name in arced banner format underneath. All of this, along with a player photo (with rounded edges) and the player's name in plain black font, is overlaid on a plain white card. Not a bad design in its own right, but it just doesn't have the classic appeal of some of the decade's better sets, such as the 1971-72 or 1979-80 releases. 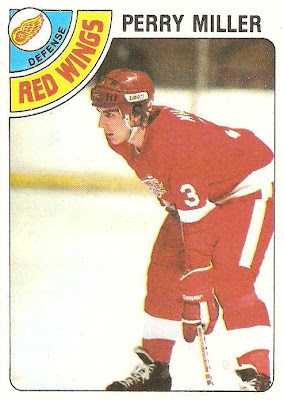 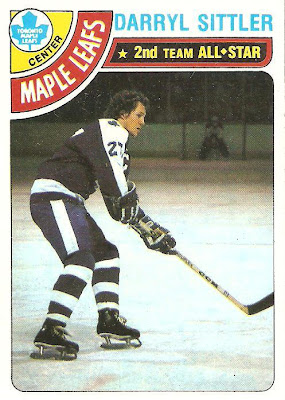 #30 - Darryl Sittler - Sweet, a Hall-of-Famer! Did you know this guy once scored 10 points (6 goals, 4 assists) in a single game against the Bruins?!?! There's a record that may never be broken. That goalie in the background is kind of creepy. 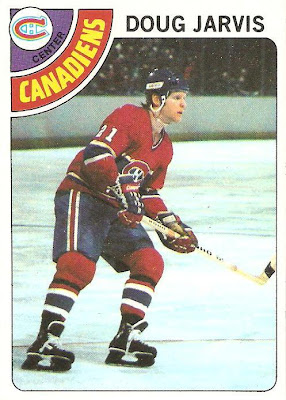 #13 - Doug Jarvis - Remember a few cards back when I said that Garry Unger was at "one time" the NHL's iron man? Well that's because Doug Jarvis bested his record of 914 consecutive games played with a new mark of 964, which still stands to this day. Pretty random to pull both of those guys in the same pack. 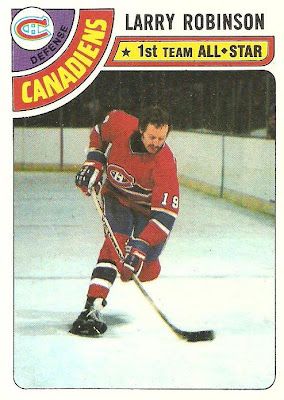 #210 - Larry Robinson - We finish off the pack strong with a second Hall-of-Famer. I know this doesn't appear to be an in-game photo, but you have to admit this isn't too bad an action shot for a card this old. The photographer managed to capture his flexed stick right at the moment of impact.

Well there you have it, a thirty two year old pack of hockey cards. I think this one was a success compared to my 1977-78 pack. I pulled two Hall-of-Famers, a pretty cool sticker, and almost all the other cards had interesting ties to modern events or were relevant in some way. I'll take this over the modern stuff any day!
Posted by shoeboxlegends at 3:22 PM

awesome... brought back a lot of memories...

My dad always disliked Peter Lee because the Pens had to give up Pierre Larouche to get him (they got Pete Mahavolich, too in the deal). I always used to tell him that he at least led the team in PP goals and Game Winners in 1978-79. To which he would reply, "What do you know? You were only 3.

that wrapper exudes all sorts of awesomeness

The wrapper shows Bobby Orr...and yet, there is no Bobby Orr card in the set.

I remember buying a complete set of these with some "8th Grade Graduation" money in 1989. The mail-order catalog LIED and said that the Gretzky RC was in this set.