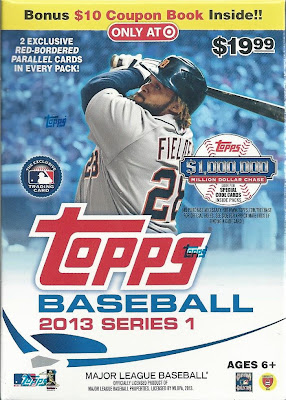 I succumbed to weakness.  I don't buy much modern wax but I was in Target yesterday running some errands and I caved and picked up a blaster of 2013 Topps Series 1.  I really liked what I had seen of the set on a few blogs, which granted wasn't a whole lot.  A blaster I saw from Night Owl though was pretty great, so I went for it.  How did I fare?  I'd call it a huge success! 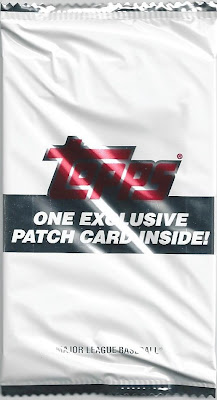 Each blaster contains one patch card to go with your 10 packs.  You can get a variety of different types of patches, including Commemorative Patches and Rookie Card Patches.  For me, this ended up being the card that made my box: 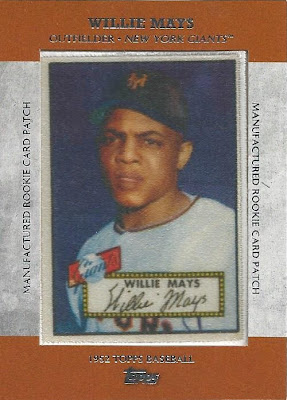 I pulled a Willie Mays Rookie Patch Card.  These remind me more of the Topps Silk cards from the past few years.  I'm not really big on the whole manufactured patch card thing, I find them kind of gimmicky unless it's a player or team I collect.  This card instantly went up for sale on eBay, a one-day auction with a .99 cents starting price and no reserve, basically an attempt to capitalize on the craze due to the flagship set being just a couple of days old.  Boy did this strategy ever pay off!  Believe it or not this card netted me $15.38!  Thanks to Willie here my blaster effectively cost me $4.61.  Let's see what that $4 and change resulted in... 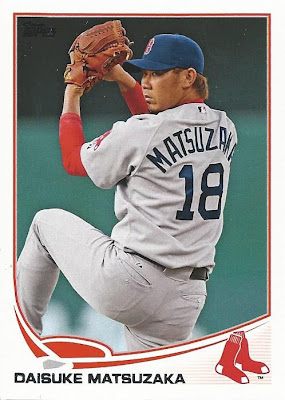 47 base cards.  I definitely do like the design, really creative concept of using the corners of the card to form the basepath.  Daisuke was the first card in my first pack.  Would it be an omen for a blaster chock full of Red Sox?  Not really... 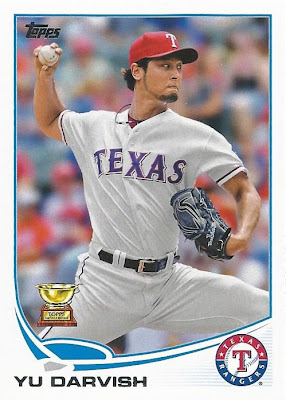 I'm not going to show you every card, especially since you've probably already seen them 10 other places by now, just a couple of highlights instead. 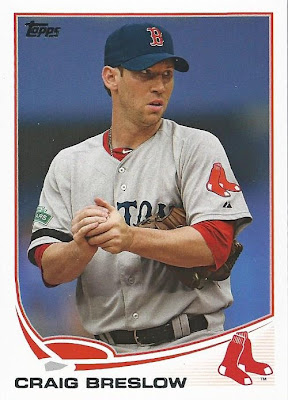 Craig Breslow here was the only other Red Sox base card I pulled. 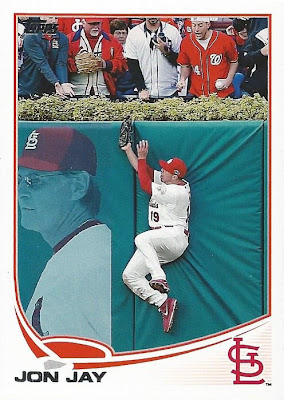 Great shot of Jon Jay crashing into the wall next to Tony LaRussa... 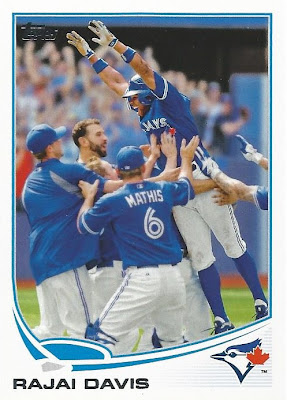 ...and finally a pair of celebration cards... 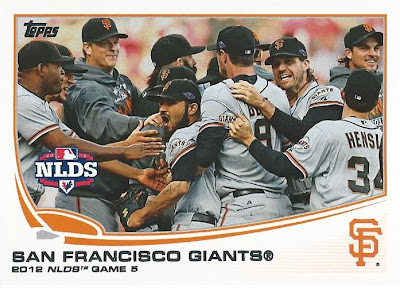 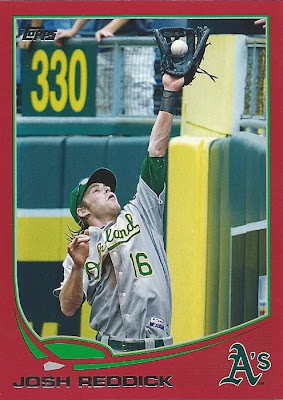 19 Target Red Parallels, which fall at 2 per pack.  Basically 19 base cards robbed from the collector, forcing you to buy more wax.  I seem to have a weakness for colored parallels though, and I really don't mind these.  I should have had 20 in total from the blaster, but my lone damaged card from the blaster was one of these (Justin Masterson). 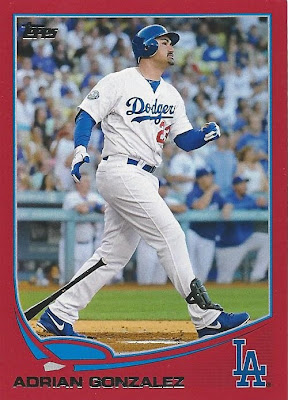 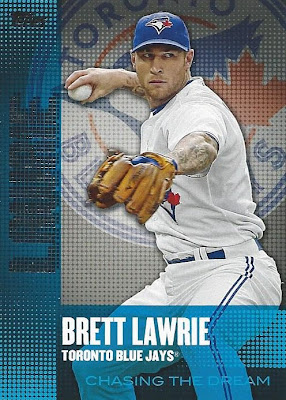 The next few inserts are off to the trade box and the Zistle trade list. 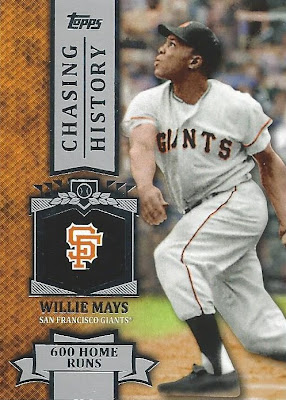 I do have to say that the Chasing History inserts are much nicer than a lot of the crap Topps has thrown at collectors over the past few years, not half bad looking cards. 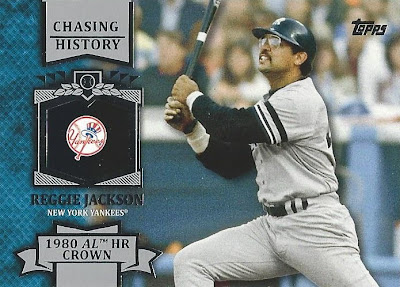 I still won't be collecting these inserts though. 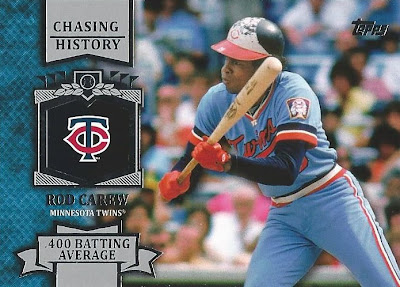 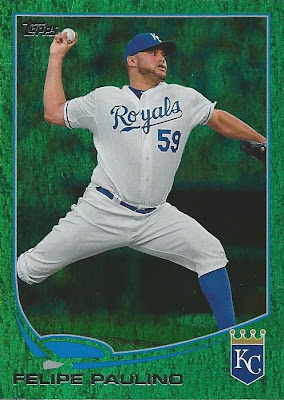 I got two Emeral Foil parallels, which are headed to the same place as the inserts above. 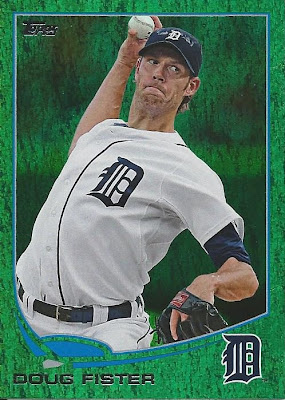 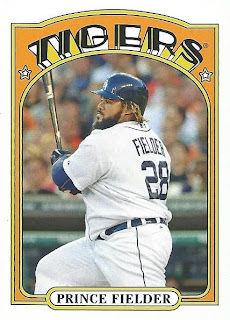 These 1972 Topps Minis are  my favorite insert by a long shot.  I know there were no '72 minis but I just really love these parallels.  Unlike Lineage they actually have proper backs, which I'll get to below... 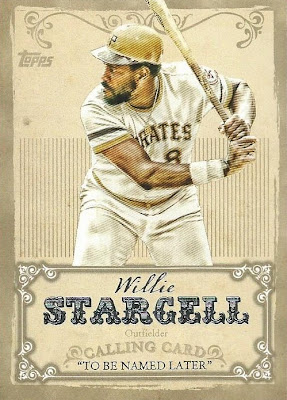 These Calling Card inserts have a nice look to them, one of the few insert sets I'm considering collecting... 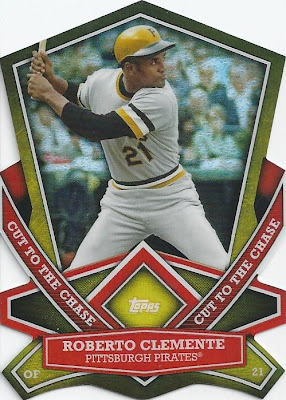 Towards the end of the box this Clemente die-cut turned up.  These last two cards would make any Pirates fan happy.  The Cut to the Chase die-cuts fall at 1:14 packs, so you're not guaranteed one in a blaster.  Couldn't ask for a much better pull than Clemente.  I'll be hanging onto this one for now. 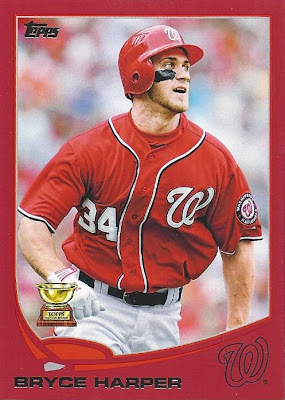 Same with this Target Red parallel, definitely a keeper.  Bryce Harper Rookie Cup, which just so happens to be card #1 in the set.  A great example of when these colored parallels work.  I'm sure I could make a few bucks back if I sold this one but I like it enough to hang onto it for now. 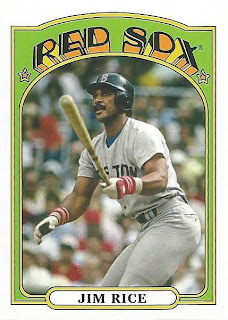 Finally, we have my favorite pull from the entire box.  There are only 3 Red Sox on the 50-card 1972 Topps Minis checklist, so I was psyched to pull one of them in my very first blaster. 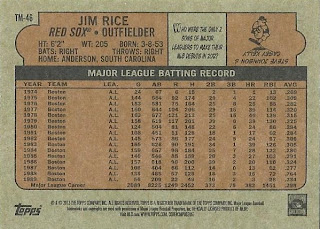 Here's a look at the back, well done!  One of the more interesting Red Sox cards I've pulled from a pack in a while.

I have to say that was a ton of fun.  I thoroughly enjoyed this blaster.  To flip the Mays manu-patch and land all the rest of these cards for under $5 made this an unquestionable win.  $4.61 netted me 77 cards (1 damaged and I don't count the useless code cards that I received two of), so in the end I paid less than 6 cents per card!  I pretty much have to try this again, right?
Posted by shoeboxlegends at 11:45 PM

that Clemente is awesome. If you ever think about trading it, I would appreciate a shot at it.

I have to say opening a blaster at the start of the collecting season is great fun. And with the design this year, it's even more fun than usual.

not nearly enough Braves. My condolences.