It's been a whole lot of baseball here lately so for this week's Signature Sundays post we're going back to hockey, taking a look at yet another 2012-13 Panini Classics Signatures auto.  As you probably guessed by the post title, it's yet another Hartford Whalers auto: 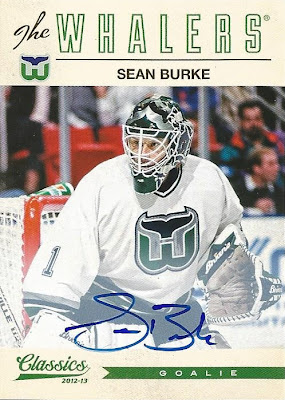 I still feel these autos are very well done.  I get that some of the subjects are questionable for a mid-to-high-tier release.  I guess that's why the price point on these boxes seems to be dropping (roughly $15 less than they were going for last time I posted one of these).  I truly appreciate the chance to get on-card Whalers autographs of some of these players for the first time though.

This is my first Burke autograph, and as far as I know it's the first Whalers autograph anyone's produced of Sean.  He was the team's mainstay between the pipes from the time he came to the Whalers prior to the '92-93 season straight through the franchise's final year in Hartford.  He played more games in net for Hartford than anyone (4 more than Mike Liut, Al Smith beat him out but only if you count the New England Whalers WHA games) and many times I saw him play in person, so I'm glad to have his autograph in my Whalers collection at last. 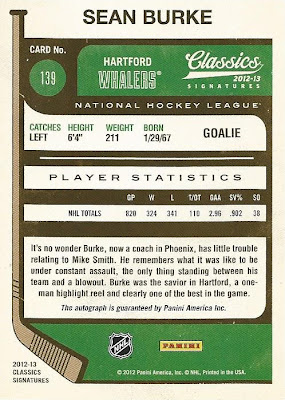 Still really digging the backs too.  This one set me back a mere $4.25 with shipping, and is my third Hartford Whalers auto from the set (Ulf Samuelsson and Pat Verbeek being the other two).  My total cost for the three so far has come to $20.25.  There are a couple more Whalers autos still to go, hopefully you'll see them here in a future Signature Sundays post.

Enjoy the Super Bowl everyone!
Posted by shoeboxlegends at 4:10 PM

Burke always had such great masks.