When I finished paying off my car loan a couple of years ago now, I began taking the money that I'd been paying towards the car each month and splitting the pot in half.  One half went into savings for the next car, the other half I'd use to shop for a "cornerstone" card for my collection.  The basic idea here was to treat myself to some more significant pieces of cardboard that would normally fall outside of my monthly allotted collection budget.

I got off to a good start and showed off some nice acquisitions early on in the experiment, including a vintage Yogi Berra and a vintage Hank Aaron, a super old hockey card, and even an authentic Cracker Jack baseball card.  After that things came to a crawl, but I'm back today with a hockey card that I was fortunate enough to pick up with last month's spare funds... 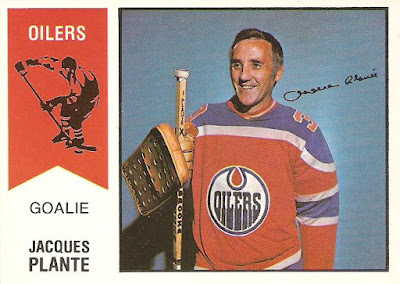 Jacques Plante is one of the most legendary goaltenders in hockey history.  I've had a couple of his cards in my collection for some time, including this one from his final professional season with the Oilers of the WHA... 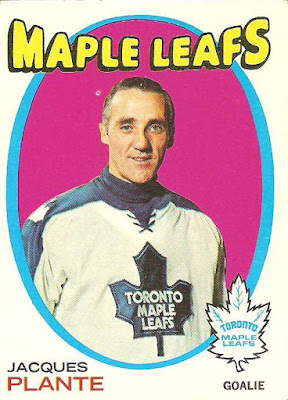 ...and this one from his late-career stint with the Leafs.

While both of them are nice enough cards, it was with the Canadiens where Plante really made his mark.  I've been after a Canadiens card from his time with the franchise for some time now, but they're not exactly cheap to acquire.  At long last I found one that fit the bill, and with the card now in hand I honestly could not be happier: 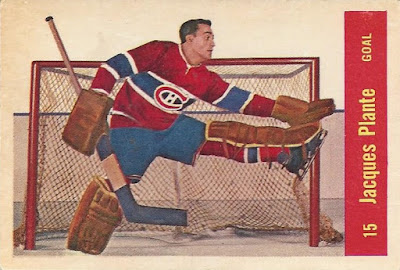 Not bad huh?!?!  This beauty is from the '57-58 Parkhurst release.  I'm pretty much enamored with it, easily one of my favorite hockey single pick-ups of the past few years.  Parkhurst did quite a few of these types of poses with goalies throughout their '50s releases and I think they make for fantastic looking pieces of cardboard. 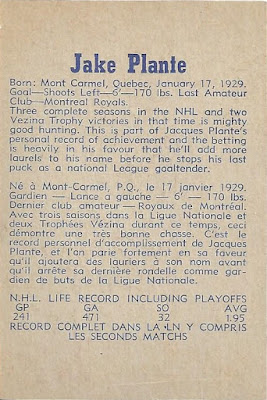 Here's the back, which is admittedly nowhere near as exciting as the front.  I can't say I knew (or if I did at one point I'd forgotten) that Jacques was ever referred to as "Jake".  At the time this card was printed up Plante was right smack in the middle of a run of five straight Stanley Cup championships with Montreal!

Here's one last look at the front, simply glorious!  I hope my 2006 Honda Civic, which now has 190,000+ miles on it, keeps running for a couple more years here!
Posted by shoeboxlegends at 9:30 AM

Oh wow! I see cards on these blogs daily that make me think 'that would be cool to have' but rarely do I think 'I MUST HAVE THAT CARD!'. You're Parkie Plante just made me say that. What a card! Congrats on such a nice pick-up.

That's an awesome addition to the collection. What a fantastic shot.

Awesome, congrats on that one!

Wow. All three cards are nice... but that 57/58 Parkhurst takes it to the next level. What a beauty!

That is a great card. Some day I must add some vintage hockey to my collection. I guess do have a couple. BTW I have close to your mileage on my even more vintage Civic.

Old Parkhurst rules! With all that I have, I really don't have much vintage hockey at all.

I just paid off my car in November too. I've been spending ALL the surplus on cards it seems. I gotta cut back.