Back in March, I did something that was very out of character for me in this hobby, and paid good money for a redemption card.  I normally stay away from these because there's never a 100% guarantee that you'll end up with the card you are redeeming for.  In this case I wanted the card so badly though that I went outside my comfort zone and took a shot.  When the dust had settled, I squared up with the seller and a few days later this arrived in my mailbox:


I eagerly scratched to reveal my redemption code and then headed over to Upper Deck's website and plugged it in.  I was met with a status of...drum roll please..."waiting for athlete".  Crap.  I checked in a few more times as the summer rolled on, and was always met with the same.

After a while I pretty much stopped checking in, though this redemption was always on the back of my mind and I was almost reaching the point of kicking myself for rolling the dice on it.  Then one day, about a month ago, I found a bubble mailer from Upper Deck in the mailbox after work.  Bingo!

I could not be happier with the card, and this is certainly a case of patience paying off.  With this purchase I added an autograph of one of my all-time favorite hockey players to my collection.  Behold! 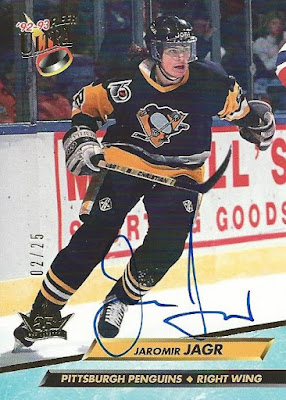 For my hockey card collection, this is about as good as it gets right here.  Jaromir Jagr is still playing in the NHL at age 45, the last holdout from the days of my childhood fandom.  It's been so much fun to watch him climb the all-time leader boards over the years, though it seems as though his career has to be close to winding down at this point.

I've wanted an autograph of Jagr for a long while, but pickings are slim when it comes to certified autos and what is out there tends to sell for decent coin.  Understandable given that Jagr has racked up more points in his career than anyone not named Gretzky!

When I learned of the existence of this '92-93 Fleer Ultra buyback auto in the 2016-17 Fleer Showcase set I knew it was the one I wanted.  This set came right in my heyday of childhood collecting, and I have fond memories of this exact card.  The Pens were coming off their back-to-back Stanley Cup championships when this card was issued, and Jagr was one of the hottest names in the hobby.  It turns out those would be the only two Stanley Cups Jaromir would win, at least to date. 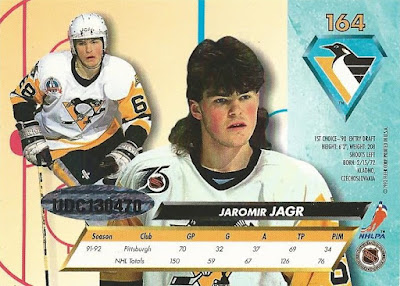 The back gives you a great look at his illustrious and legendary mullet.  That is a hockey haircut if I've ever seen one.  Of course you have your authentication hologram from Upper Deck as well, just underneath the smaller action photo there. 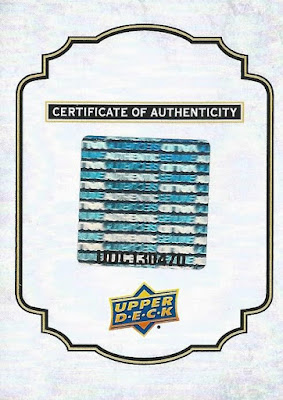 Tying it together, here's the CoA for the card, tied by serial number to the authentication hologram on the back.

I am extremely pleased to own one of the 25 copies that exist of this beautiful, on-card autograph.  Jaromir Jagr is one of the most exciting and memorable players ever to take the ice, and this is a piece of sports memorabilia that I will certainly cherish for as long as I collect!
Posted by shoeboxlegends at 9:36 PM

That is a seriously awesome card! I loved 1992-93 Fleer Ultra hockey. I bought so many packs of that stuff back in the day. I wish Upper Deck would do more early to mid-1990 buybacks and buyback autographs.

It's nice to see that your risk paid off! I too bought a redemption earlier this year that Panini came through with after a couple of months worth of waiting.

Congrats on getting that Jagr auto redeemed! That is a fantastic card - 92-93 Ultra is one of my all-time favorite sets, too.

That’s a killer redemption! Living in Houston, all we were lacking hockey most of the time. Dad is from Pittsburgh though, so the Pens became my team to follow. I still have copies of the Post-Gazette from those 90s championships that my grandparents had saved for me.

Very nice! Glad the redemption turned out well for you.

Awesome!! How can you not be a fan of Jagr? I mean, he entered the NHL the year I started kindergarten, and he's still going!

HOLY MOLY!!!! That is a gem of all Jagrs in my books. Beautiful addition, glad you were patient and it arrived instead of being forever stuck in purgatory like my Artifacts Auto Black Dino Cicceralli /5 that never happened.