After a long and stressful day, I'm low on both time and mental energy.  So, here are two graded cards from the '70s that have been waiting a while now to see the light of day on the blog... 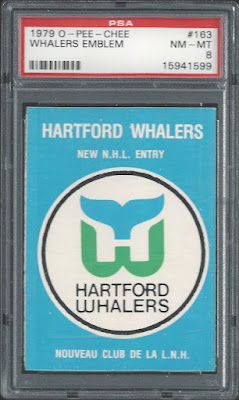 On the hockey side, we've got a fantastic card from the iconic 1979-80 O-Pee-Chee set.  Finishing off the Topps version of this set is among my greatest accomplishments since re-entering the hobby.  While I don't have nearly so many from the O-Pee-Chee release, I couldn't resist the chance to pick up the card that signifies the beginning of my favorite NHL team ever, the Hartford Whalers.

In the Topps release, the four teams that joined the NHL when the WHA folded were all combined onto a single card, which is also kind of cool in its own rite.  I like that in the O-Pee-Chee release each team received their own dedicated card though. 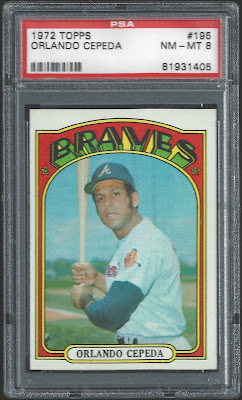 On the side of my other favorite sport to collect, baseball, here's a '72 Topps Orlando Cepeda.  Orlando was closer to the end than the beginning here, but you can't go wrong with 1972 Topps.  I'd love to take a crack at that set someday.

This card is part of a renewed effort on my part heading into 2019 to better enjoy the cards I already have.  A change in our household income is going to force me to make some adjustments, and a non-essential expense like baseball cards is the first thing trimmed out in these circumstances.  I don't mind though, because I have so many amazing cards backlogged from my 10+ years of adult collecting that I've got plenty of content for the coming year even if I didn't buy a single new card.

For example, this Cepeda is being featured here for the first time, and I bought it back in February...of 2008.  Yes, you read that correctly.  Only took me a decade to get around to showing this $7.50 pick-up.

More on my upcoming adjustments to my approach to the hobby for the coming year in a future post.  No time tonight.  In the meantime, thanks for stopping by!
Posted by shoeboxlegends at 10:01 PM

Cool logo card!
When I see Orlando I think of Ernie Banks on when tv pronouncing his last name Cepeder.

I plan on trimming my hobby budget in 2019 too. Both of my cars have reached double digits in age and although I've kept both in great running shape... it's only a matter of time before I need a new one. Plus I have a nice bank of saved scans... plus thousands of cards that haven't been scanned that are waiting to be blogged.