These Fit, That Doesn't - The Greatest?

Over the past few months I've picked up three cards featuring subjects that I think many would argue are the best in the history of their respective sports.  A couple of them fit my collection, one doesn't so much, but I love all three of them. 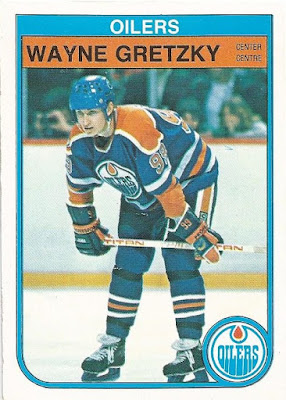 On the hockey front, a card that I've literally wanted for nearly ten years now.  Finally picked up a copy at one of the last remaining hobby shops within driving distance of my house when I stumbled across it for $7 in a discount vintage hockey bin.  With no Topps release in '82-83, this is Gretzky's only major release base card from that season.  This is my 188th Gretzky and counting so far in my collection on The Trading Card Database, which I was surprised to find lands me in the top 50 Gretzky collectors on the site.

Greatest in the history of his sport?  I say so, though I know others who make cases for players like Bobby Orr, Gordie Howe, etc.  I'm sure it depends on your era (Gretzky is the only one of those three players I was able to see play in person), how you rate the importance of each position, and many more subjective factors.  Can you find a single person who doesn't rank Gretzky in their top five, though?  Doubt it! 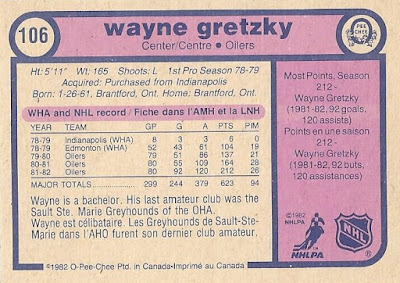 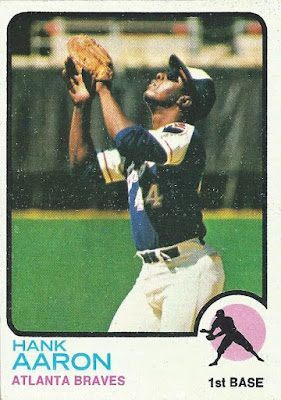 Here's the other card that was an obvious fit for my collection, picked up the same day as the Gretzky for $5.  I've always been enamored with Hank Aaron, even read his biography "I Had a Hammer: The Hank Aaron Story" in the fifth grade, and that's no small feat for an 11-year-old.  I'm long overdue in adding a copy of this late-career flagship card to my collection, especially given how much I enjoy 1973 Topps and how cheaply this one can be had for.

Of the three players featured in today's post, I'm guessing this is where there's the most grey area in terms of "best in the history of their sport".  It just seems so much harder to quantify in baseball, at least to me anyway.  I mean, who's the better player between Aaron, Babe Ruth, Mickey Mantle, or Mike Trout?  Hard to say, isn't it?  Either way, a fantastic addition to my collection, no debate about that. 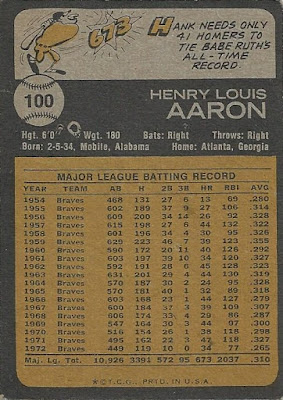 (I love the cartoon on the back, building anticipation for the breaking of Ruth's home run record) 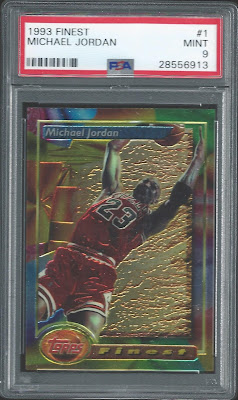 Finally, the card that's somewhat of an outlier as far as my collection goes.  What can I say?  I've really been into the idea of getting fewer, more significant cards of key players with my hobby money lately.  Though I don't collect basketball, I felt compelled to add a nice Michael Jordan to my collection.  I certainly don't favor basketball enough to spend the kind of dough it would take to acquire his rookie card, so I started thinking of other Jordan cards that I have fond memories of, and that led me to 1993-94 Finest.  I would have loved to have grabbed the refractor version of this one, but it sells for hundreds and thus was ruled out for the same reason as his RC.  Still, I like this one quite a bit, and it feels like a pretty significant addition to my small basketball collection for what was very cheap coin in the end.

Out of these three, does Jordan have the strongest case for best ever in his sport?  To me it seems possible, though I'm not much of a basketball fan admittedly.  What do you think?

That's all for today, thanks for stopping by as always!
Posted by shoeboxlegends at 2:27 PM

For a notoriously off centered card, that Gretzky has to be one of the finer examples you could land. Especially at that price.

If I had known you were looking for a nice Jordan, I could have sent you something back in a thank you for all the stuff you've sent me!

By the way, I was expecting Pele, who I think people consider the best soccer player ever, but I don't really know for sure.

Although the GOAT in the hockey category has been debated time and time again, I sincerely believe that Gretzky is the true greatest of all time in the sport. Throughout his career he literally rewrote the record books! His nickname is "THE GREAT ONE". I mean, who doesn't know who Wayne Gretzky is?

When it comes to baseball, I have no idea - not familiar with the legends of the sport enough to make any kind of suggestion as to who should be crowned the greatest.

Jordan is the greatest baller of all time in my opinion. Always the debate between him and LeBron - Lebron has had an amazing career but he is and will never be Mike..

I love the line "Wayne est célibataire" on the Gretzky card. To an English speaker it sounds as though it's suggesting something a little different!

Gretzky, Ruth, and Jordan are the GOATs of their sports. I feel sure about each.

I've heard so many good arguments that I now question my personal opinion on Jordan being the GOAT. A lot of stuff has to do with the different eras the athletes play in. As for Gretzky... I only watched him play at the end of his career... but I always grew up hearing people call him The Great One.