Time for another "Grabbing Gretzkys" post, highlighting some of my pick-ups in my attempt to build a moderately sized but respectable collection of the man whom I'd argue is the greatest hockey player of all-time.

Last time we looked at a graded version of the first Gretzky card that I ever pulled myself from a pack.  Today, it's one of the more coveted parallels of the parallel-ridden decade that was the '90s! 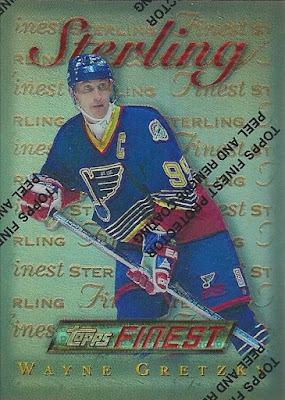 If you enjoy shiny cards like I do, than you're most likely familiar with the infamous Topps Finest Refractors.  Introduced in 1993, these parallels took the collecting universe by storm.  To this day some Finest Refractors, most notably the inaugural baseball release, remain some of the most valued and coveted cards of the '90s.  It is not uncommon to see mint condition specimens of superstars or HOFers from that first baseball set reach hundreds of dollars on the open market, sometimes thousands.

On the hockey side, there were three Finest sets in the '90s; the inaugural '94-95 set, one the following year in '95-96, and then one last effort in '98-99.  The final set isn't that rare or valuable, but the first two sets have maintained collector demand for 25 years strong here.  The 1995-96 set added an extra wrinkle, by having three tiers of cards on the checklist; bronze, silver and gold.  Hobby boxes weren't cheap, and you pulled only a couple of refractors per box.  Most likely you were pulling two bronze refractors.  If you were very lucky, maybe you saw a silver and a bronze.  Extremely lucky, and you may have landed one of the prized Gold Refractors.  Insane, off the charts level lucky, and that card may have been the one you see here, the Wayne Gretzky Gold Refractor!

I've been grabbing Finest Refractors for my hockey collection for years now, and this card has always been the Holy Grail as far as that quest goes.  Wayne has a more common bronze card in this release also (because of course Topps went out of their way to get him on the checklist twice in a small, 191-card set), and even the refractor version of that card routinely gets up into the triple digits.  This Gold Refractor doesn't get any easier to find or cheaper, that's for sure. 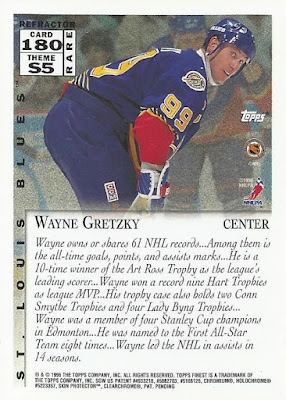 I have been dying to get my mitts on this card for a long while, sort of a white whale of sorts, and when an opportunity presented itself early last year that was simply too good to pass up, and that I knew I'd likely never see again, I went for it.  Just like that I had one of my most prized, rare and valuable additions to my Wayne Gretzky collection finally in hand.  I like that on the reverse, unlike with the set the year prior, it's clearly noted in the upper left corner that this is a Refractor.

I actually love that the card pictures Wayne's often-forgotten short stint with the St. Louis Blues.  I've got a ton of Gretzky cards from his time with the Oilers, Kings and Rangers, but very few from his brief St. Louis stop.  This is without a doubt the best Blues Gretzky card that I own, and probably always will be.

Here's another look at the front.  The scan looks good for sure, but in person the card is a real stunner.  As anyone who has held one or owns one knows, there's just something about the early Finest Refractors that is sort of intangible and tough to replicate in a scan.

Someday I'd love to pick up Wayne's 1994-95 Finest Refractor to pair with this one, and I guess to a lesser extent his '98-99 to round out the trio.  If I had to pick just one though, this would certainly be it...
Posted by shoeboxlegends at 3:30 PM

Awesome card. That set all in refractor form would be something breathtaking to behold.

This is such a great card. I remember first seeing this card shortly after the set was released. To this day it is still an awesome card.

There was a time when I was attempting to build that gold refractor set. Had most of the big guys including the Gretzky, but the guy hoarding all of the Jagrs kinda killed it for me.

Parallel-ridden decade, for sure. Great card, though. Congratulations!

I have a question, I have a 1995 Finest Sterling Gretzky refractor graded by PSA but i just read your piece about it saying "refractor" on the back upper left corner. Mine doesn't have that but was still graded as a refractor. Opinions?