Only have time for a quick post tonight after a mentally exhausting day at the keyboard for work.  Here's one of the two cards I picked up with my $50 Amex gift card that I received for a 15th year work anniversary gift: 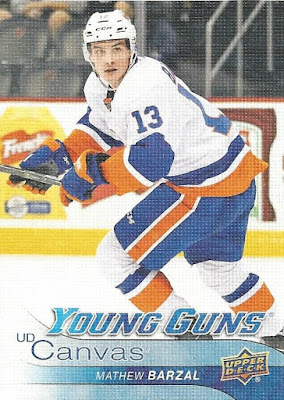 I watch a good deal of NHL hockey, maybe too much if you ask my wife.  While I watch every Bruins game that I can manage, I'll also put on just about any nationally televised game in the background if we're just hanging out.  I also try to catch the NHL Network's daily "On The Fly" highlight show.

One of the young players in the league that I find to be the most exciting and dynamic is center Mathew Barzal of the New York Islanders.  New York wisely used their first round pick (16th overall) in the 2015 NHL Entry Draft to land the youngster from British Columbia, and he's been a solid addition to an exciting team that looks poised to make a playoff run this season.

In his first full season last year, Mathew appeared in all 82 games and racked up an impressive 85 points.  That was good enough to place within the top 15 in league scoring, and Barzal rightfully captured the Calder Memorial Trophy as the league's Rookie of the Year.  This year he has again appeared in every one of New York's games, has 51 points and counting at the time of this post, and as I mentioned is a big reason why the Islanders sit atop the Metropolitan division at the moment. 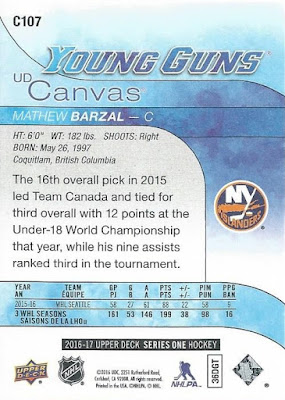 Mathew has racked up 136 points already in less than two seasons, and is still just 21 years old!  I have a feeling that hockey fans will be hearing his name for many, many years to come.  I enjoy his play enough that I decided a while back to try to add a rookie card of his to my hockey collection, because I don't see them getting any cheaper as time passes if he can keep producing the way he has so far in his short career.

I settled on the Canvas parallel version of his Young Guns rookie from Upper Deck.  I've always enjoyed these parallels, and they're a bit more rare than their standard Young Guns counterparts.  I paid a whopping $27.99 for this one if you can believe that, which is quite a bit more than I'd typically shell out for a modern hockey single.  I had the gift card though, and wanted to use it on something I normally wouldn't buy myself, so here we are.

I look forward to watching Barzal's career progress over the next few seasons, for better or worse.  While I don't collect cards for their monetary value but rather for the enjoyment of it, it will nonetheless be amusing to look back at this post in a few years to see whether this has held or increased its value, or on the flip side has tanked and is worth pennies.  Either way I have no regrets, and I'm happy with this representation of Mathew in my ever-growing hockey collection!

Sweet! Bruins had 3 chances at the kid.

If he continues to rack up points at this rate, this card is going to be worth much more than the $27.99 you invested in it.

Luckily for me I pulled his base Young Guns card from a pack.

That's a bargain for Barzal, especially the Canvas parallel. The asking price on COMC is much higher than $27.99. A wise investment if you ask me.