A few weeks ago I received yet another amazing package of cards completely out of the blue from my longtime hobby friend Douglas of Sportscards from the Dollar Store.  It's been years of packages going back and forth between us now, though I fear more cards have crossed the US/Canada border in my direction than in his.  I hope to return fire soon here!

In the meantime, this latest package was a real whopper!  Stuffed full of both baseball and hockey, it contained around two dozen keepers for my various collections.  Today though, as I get a break from my football posts due to the Patriots' Thursday night game this week, I'm going to highlight just two of them in my first "Signature Sundays" post in quite some time... 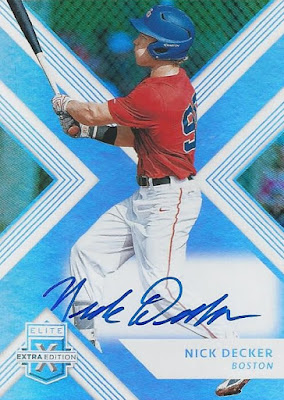 On the baseball side, I found this fantastically bright autograph of prospect Nick Decker for my Red Sox collection in the package.  This is from the 2018 Panini Elite Extra Edition set, and actually represents my first card of any sort from that release.  The blue design on the background really shines, every bit as much in person as it appears to here in the scan.  Looks like this is the base version, but there are many different parallels with varying backgrounds and print runs (because of course there are!).

I have to admit I wasn't all that familiar with Nick when I first laid eyes on this card.  Still just 20 years old, he got in around 50 games at A-ball last year and fared okay.  Red Sox prospecting sites indicate that he's known more for his bat than his fielding, and projects to be a corner outfielder most likely.

I didn't plan it this way, in fact I didn't even know this until looking it up just now, but he's committed to Maryland for school.  This is interesting and coincidental given that I just got back last night from an 8-day vacation to Maryland/DC with my wife.

It'll be fun to keep an eye on Nick's career path now that I have this awesome, on-card autograph representing him in my baseball collection.  If he becomes something this will be a great card to have, but even if he doesn't it's still a nice, flashy hit for my Sox collection.

And now for the other autograph Douglas included this time around... 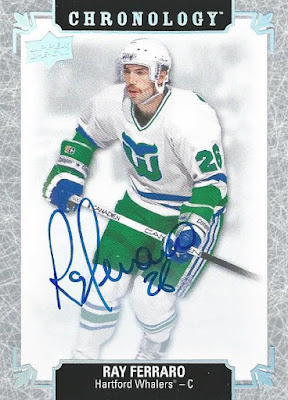 Bam!  If you've read this blog over the years then you probably know that on the hockey side of collecting I prize one thing above all others.  That one thing would be Hartford Whalers cards.  I don't do a good job of keeping up with any new ones that come out, because frankly there just aren't that many.  Douglas has single-handedly kept me up to date on the modern Whalers cards front over the years though.  He's sent me more than any other collector by far, and more than I've probably even purchased myself!

Well, he out-did himself this time around after landing a spot in a group break of 2018-19 Upper Deck Chronology that included the Whalers.  This bold, on-card autograph of fan favorite Ray Ferraro looks even better in hand than it does here, I assure you.  Upper Deck's choice to go with holographic foil for the border design elements really gives these a classy feel.  This is the lone Whalers card in the "Franchise History Autos" portion of this set.

This is probably the single greatest Whalers card I've added to my collection this entire year.  Thank you so, so much Douglas!!!

If you enjoyed these two, check back later this week to see the rest of the great cards that came with this pair.  Until then...
Posted by shoeboxlegends at 8:45 AM

Nice Ferraro! About 10 years ago, I was obsessed with purchasing Chronology "on card" basketball autographs. Maybe I should look into collecting 18/19 Chronology hockey autographs too.