A Football Card Experiment - Game 7 - It's the Jets Again

For week 7 action, the 6-0 Patriots find themselves on the road to face the 1-4 New York Jets.  The Patriots handled New York in the first match-up of the season in Week 3, and as I did then I'm featuring a 1965 Topps card this time around... 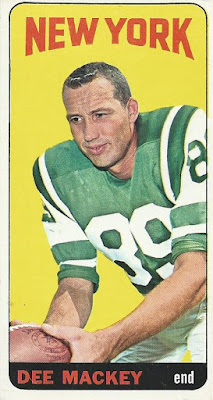 Not sure what more I can say about this set at this point other than I love these "tallboy" cards.  Pretty much identical to their hockey card cousins from the same year.  I'm not sure why Dee Mackey, a tight end, appears to be practicing receiving a snap here, but we'll look past that.  A great image and a colorful card. 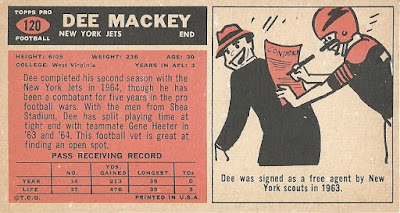 The cartoon on the back might be even better, I really like the concept of Mackey excitedly signing right on the scout's back!

Hard to believe we'll have 7 weeks in the books already on the NFL season after tonight's action.  My meager football card collection is now 7 cards the richer for it.  Will the Patriots stay undefeated and improve to 7-0, or will the Jets rally at home to stun the football world?  Should be a fun game either way.

Enjoy the NFL action tonight football fans, and thanks as always for stopping by!
Posted by shoeboxlegends at 9:57 AM

Great-looking card. I'm not sure who's more excited in that cartoon - the scout or Mackey!

Nice card... I'm ashamed to say I don't have any Tall Boys from either Hockey or Football... I really need to remedy that.

The NFL season is flying by... but my school year seems to be taking forever to wrap up the first quarter.