Today's card is an example of an eBay purchase gone wrong, but then made right.  Let me set the stage...

For a couple of months now I'd been watching a particular T206 card on eBay.  Priced around $40 with free shipping, it was just a bit more than I was comfortable paying for the card, but I kept it on my watch list regardless.  Well, a week or two ago the seller sent a private offer to anyone watching the card for $33, shipping still free.  I pounced on the opportunity and scooped up the card!

Fast forward to last week, I was on vacation in Washington DC with my wife when I received a message from the seller.  He'd inadvertently sent my card to another buyer, and another buyer's T206 to me.

While slightly annoying to me given that I sell on eBay now too and go out of my way to avoid these kind of mix-ups, I'm not an unreasonable person and I understand mistakes happen.  The seller initially offered me a full refund if I returned the card, or a $5 Paypal payment if I was willing to keep the mistaken card.  I probably would have accepted the latter, but since I wanted the card I'd actually paid for I asked kindly if there was any way to have us both return the incorrect cards so that they could be re-routed to their correct recipients.

To my surprise, the seller indicated that while he isn't able to arrange an exchange, he felt bad about the mix-up and to make up for it he was going to issue me a full refund and allow me to keep the incorrect card!  This was beyond gracious, and more than took away any of the sting of missing out on the card I'd initially gone after.

Here's the one I ended up with in the end... 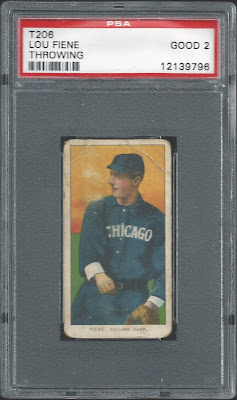 While not in quite as good a shape as the one I was originally pursuing, this is one beautiful piece of cardboard!  I love the solid blue White Sox uniform contrasted against the bright green grass and that stunning sunset. 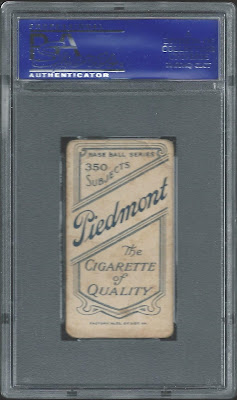 As you can see, this particular card is a Piedmont back, which is the most common back among my small grouping of T206 cards at this point.

Lou Fiene was a pitcher known for his spitball, but his Major League career was brief.  He appeared in a total of 26 games, all for the White Sox, between 1906 and 1909.

This is my first non-Red Sox T206 card, and certainly the first T206 I've ever received for free!  A huge thank you to the seller for being a stand-up guy, and more than making up for his mistake.

In other hobby news, I finally made it to a card show this past Monday for the first time in years!  Check in this weekend to see some of my haul.  Until then, thanks for stopping by!
Posted by shoeboxlegends at 7:10 AM

That is a blessing indeed!

People make mistakes. This seller is top notch. Kudos to him for going out of his way to make things right.

It's always nice to be reminded that there are good sellers out there. Thanks for sharing the story, and congratulations on an excellent (and free) pickup!

Glad it turned out well for you. Good post.