Someday I'd love to finish off a run of complete sets from the 1950s; one for each year between 1950 and 1959.  The obvious choice for a 1950 set is the beautiful Bowman release.  I've been (very) slowly picking away at completing this one over time, though it hasn't exactly been near the top of my priority list this past calendar year.  Nonetheless, I have my latest example to share here today... 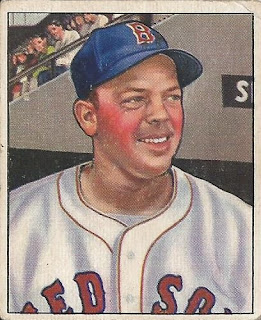 Today's subject is shortstop Vern Stephens of the Boston Red Sox.  Vern's name may not be as recognizable as some of the total superstars of his era, but he was a fantastic hitter, especially for a shortstop.  He was either an All-Star, got MVP votes, or both for ten consecutive seasons between 1942 and 1951.  He led the league in home runs once, and in RBI three times.  While not inducted in Cooperstown, he is indeed a member of the Boston Red Sox Hall of Fame. 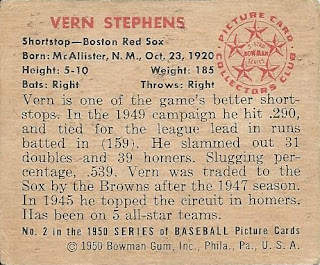 Not the most exciting write-up on the back, but you do get some sense of his statistical dominance around this era.  Pretty amazing that Boston was able to land a talent like this via trade in 1947.

This may not be a card that's fit for grading condition-wise, but it's right in line with most of my small number of cards from this set so far.  Maybe a touch rougher than some of them if I'm being brutally honest, but not noticeably different.  Happy to add a vintage card of this Red Sox slugger to my collection!

A dozen down, just 240 of these small works of art left to go.  Maybe someday!

Must have been cold that day, unless Bowman decided to give Vern that frostbite look on their own :P

Didn't know anything about this guy. Thanks for adding all the info. Great-looking card!

Wow. Some stellar accomplishments for a guy I've never heard of.