Fivers is an aptly named series of ongoing posts, each of which will feature a single card that cost me $5 (give or take).  Today's entry came in just a bit under $5 actually, $4.04 to be precise... 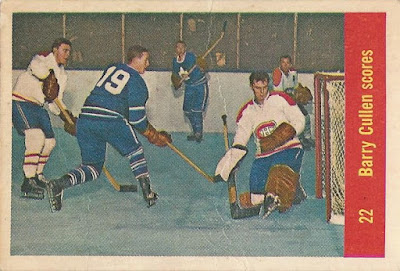 This beauty represents my third card from the 1957-58 Parkhurst set.  As hockey card collectors know, just about any card from the 1950s or earlier is relatively scarce.  I was pleased to bring this one home for just a touch over $4 with free shipping during an eBay sale recently.  If you look closely you can see that there's a surface wrinkle going down the center of the card, but it doesn't detract much from the card's appeal if you ask me.

The in-game action shots in the early Parkhurst sets are particularly cool, and this shot of Barry Cullen scoring on the Canadiens is no exception.  Modern day hockey fans will notice two significant things missing from the photograph on this card; helmets, and advertisements on the boards. 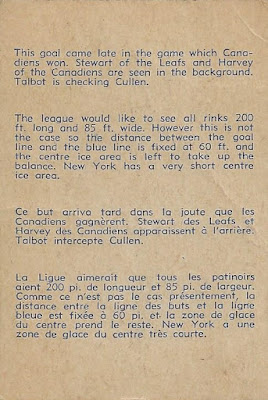 It's interesting to note that the back of the card references the fact that rink sizes were not yet fully standardized across the league.

So, there's my latest hockey card pick-up.  Back to scanning and cataloging the second cube of Red Sox from Billy for an upcoming post.  Enjoy your Friday evening, and thanks as always for stopping by!
Posted by shoeboxlegends at 8:15 PM

Beautiful card! I need to get some Parkhurst hockey.

No ads, no helmets... and no face mask on the goalie!

I just spotted the first cube post now...hope this one is just as good! I picked up a 1951-52 Parkhurst card when I was at the show in Connecticut back in March, they are just fun cards.

So cool about the helmets... or lack thereof. It's crazy that there was a time when goalies didn't wear masks.

Great-looking card. Interesting back, too -- "The league would like to see all rinks 200 ft. long and 85 ft. wide." Reminds me of how the old Boston Garden and The Aud in Buffalo were a little smaller than standard size.