Movie collectors are well aware of the special edition versions of films that are released containing deleted scenes and other bonus features.  Well, think of this post as the cardboard equivalent of that, as what you're about to see are a whole smattering of scans from my drafts folder that never saw the light of day on the blog over the past year.

Rather than carry the mess over into 2020, I jammed them all into a single post here so that I can start the year with a relatively clean slate.  Let's take a look at the misfits... 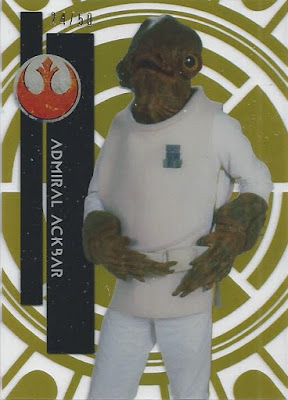 I've mentioned my love of the Star Wars Tek cards numerous times here on the blog.  One of my favorite obscure characters from the Star Wars universe is Admiral Ackbar, probably from watching Return of the Jedi around a hundred times as a kid, so I was helpless in the face of this Gold parallel (#'d /50) from the 2016 release.  Was bummed the way they unceremoniously killed this guy off in The Last Jedi, but cool card nonetheless. 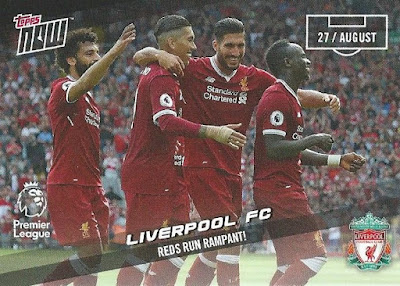 I don't post much about it, since soccer posts seem to draw little interest, but I've been enjoying Premier League Soccer again this year.  It's been an especially fun ride given that my favorite club, Liverpool, has been dominating, and appears ready to claim its first league championship since I started watching the sport devotedly around 8 or 9 years ago. 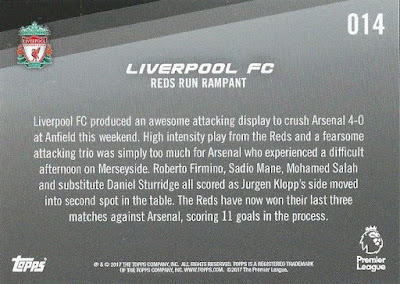 I picked up this Premier League Topps NOW card off of eBay a long while back because it was cheap, and because I thought it was interesting to have a Topps NOW card of my favorite soccer club.  That's about the extent of the story behind this one, which is why it never seemed to merit its own dedicated post. 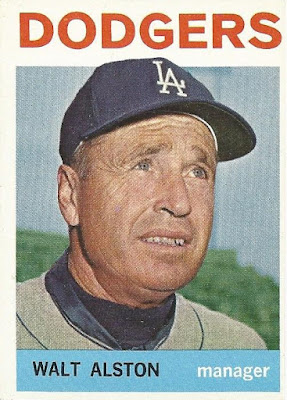 A '64 Walt Alston, in beautiful shape, plucked from a 50 cent bin.  I made some huge additions to my 1964 Topps collection this past year, so it's fitting to squeeze in one more late here. 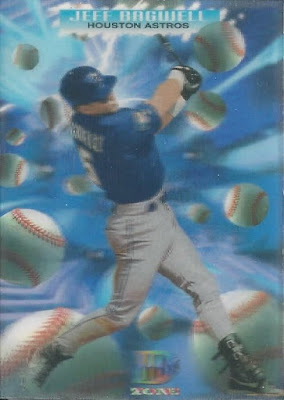 I was a kid collector from the early through mid-'90s, so I have a soft spot for all the crazy, gaudy releases that were sprung upon collectors during this time.  For example, I immediately plopped this Topps DIII Bagwell insert into my pile when I ran across it in a quarter box.  Just awesome; I'd love to find the rest of these at some point.

I honestly don't recall where this one came from, but I still hang onto cards of the great Eric Lindros.  In fact, I've yet to feature my single greatest Lindros card on the blog, something I'll have to try to remedy in 2020. 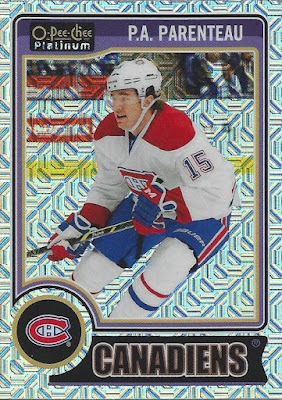 There are few sets, especially in my recent years of slimming down my collection size, where I'll hang onto any card regardless of the player depicted.  The Traxx parallels from the inaugural O-Pee-Chee Platinum release are one such example.

Trying to recall where this one came from.  If memory serves, I think I picked up a single pack of Topps Rogue One a while back and this insert was the only card I liked enough to hang onto. 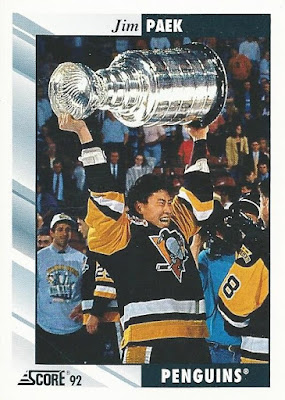 Let's switch over to hockey now, with an absolutely fantastic photograph courtesy of 1992-93 Score.  This is perfection.  Quite possibly my favorite card in the entire set, and one of the best shots of Lord Stanley's Cup in my collection. 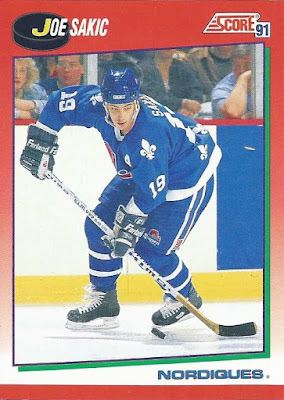 One of my favorite sets to collect as a kid was 1991-92 Score.  These packs were just so fun to open because you were virtually guaranteed to get good star power every time.  That's because in addition to all the superstars in the base set... 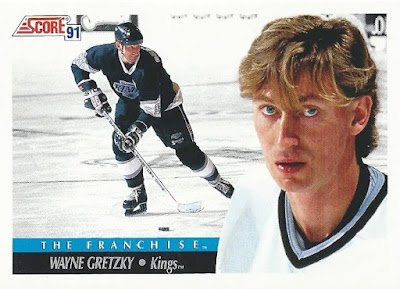 ...this release had the endless subsets that Score was known for at the time.  Like The Franchise... 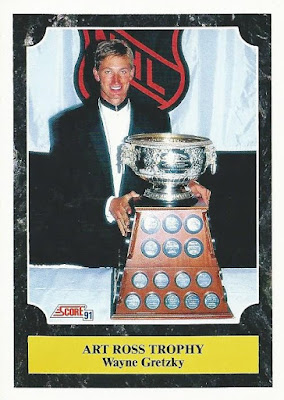 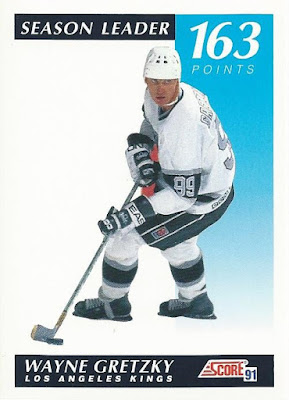 ...and of course statistical leaders.  All of these provided opportunities to land additional cards of star players.  I'll grant you that some of what Score included looks a little dated decades later, but this set was a ton of fun!  Enough so that I still enjoy opening an odd pack or two (and believe me, they're everywhere still) to this day. 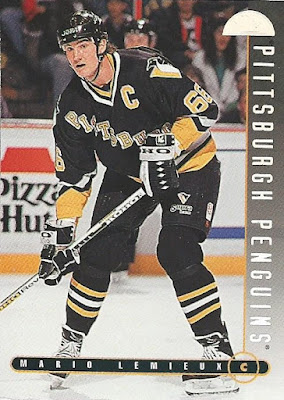 I mentioned before that at one point I opened a box of this 1995-96 Leaf set.  Was at least ten years ago, or even longer, not long after returning to collecting as an adult.  Most of the contents got shipped off to Billy Kingsley in the past year or so, but I held on to a copy of each Whalers card, as well as Super Mario... 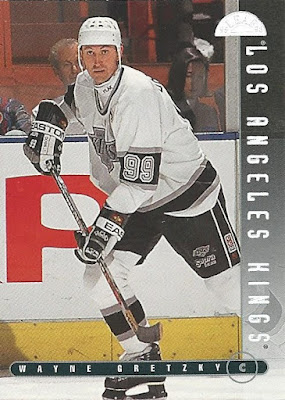 ...and The Great One.  Two of the best all-time, and certainly two of the best from the era I grew up in, so I'm always happy to acquire new cards of either of these guys. 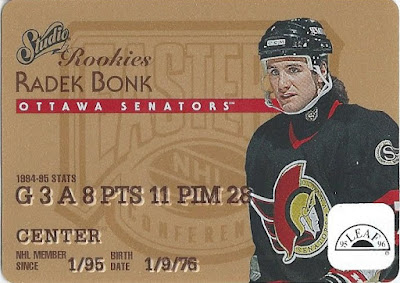 I also kept this Studio Gold insert from the box, just because I've always thought these credit card-themed inserts were a fun concept. 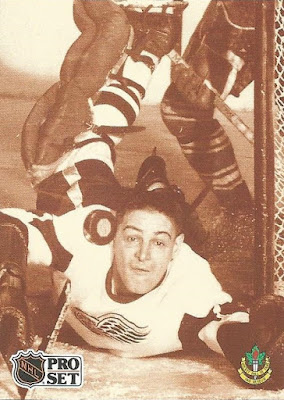 Next up, a trio of keepers from the 1991-92 Pro Set junk wax special.  This was a fun set too, though I have to give the edge to Score I think.  Still, it's hard to beat the image on this Terry Sawchuk.  Brilliance, especially for 1991! 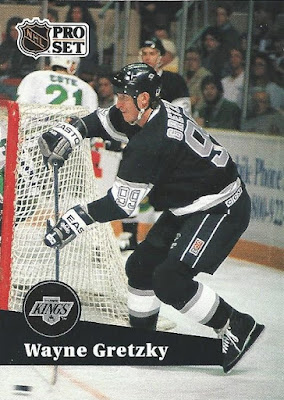 A couple of things to note about this Gretzky.  First, he's facing off against the Hartford Whalers here.  Secondly, I sent a copy of this card off to be autographed by Wayne as a kid, and actually received it back.  Now, I don't know if Wayne signed it himself, if an assistant did it, or even if my parents sent me a fake one in an elaborate farce.  All I know is I still have the card to this day, and it's a fun story. 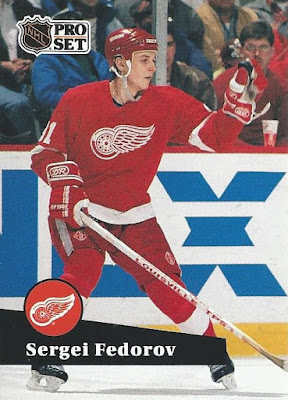 Last of the '91-92 Pro Set cards, just because Fedorov was an absolute favorite of mine for many years.  He's a fun guy to passively collect too, since his prime years came when there were just so many cards being released.  Aside from Wayne Gretzky, he's the only hockey player that I currently have 100+ cards of in my collection on The Trading Card Database (though a few others will be joining those ranks any day now). 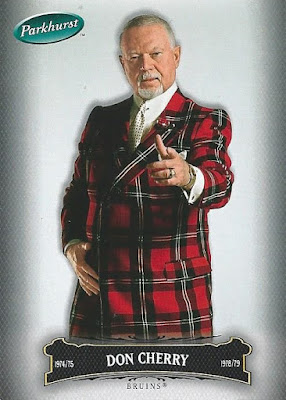 Ouch, this one would have been a lot cooler to post a couple of months back.  Sort of rough the way it ended for Don.  I can't say I was all that shocked, though.  Regardless of what you think about the man, this is easily the best suit pictured on any card in my collection I think.

Let's close it out with some baseball.  This one was plucked from a 50 cent bin for the sole reason that I had no 1977 Topps Cloth Stickers prior to this. 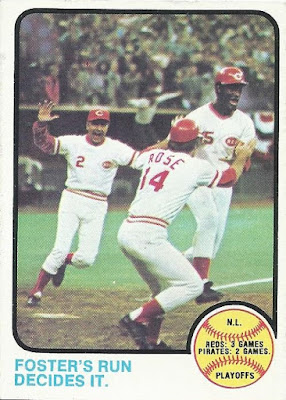 I love 1973 Topps.  Even did an entire Buyback Franken-set post in tribute to the set recently.  If I didn't have so many other hobby projects ongoing I'd take a crack at it.  Maybe someday.  I won't need this NL Playoffs card when I do! 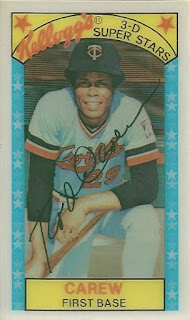 From the same 50 cent box as the Bill Madlock, I snagged two Rod Carew Kellogg's cards.  His 1979 release... 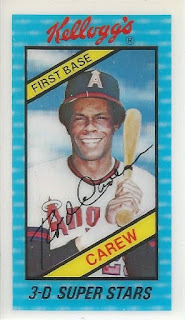 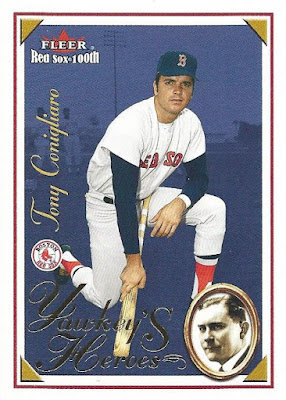 Lastly, a pair of inserts from a set that is an absolute home run for Red Sox fans; Fleer's 2001 Red Sox 100th Anniversary.  I really, really should make an effort to prioritize knocking this one off in the coming year, as it does a great job portraying the long history of my favorite franchise. 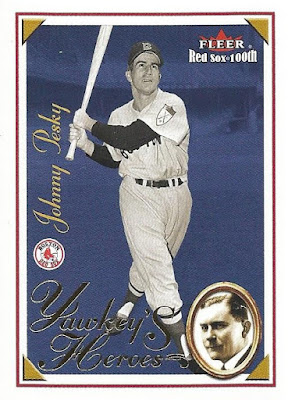 For now, these two Yawkey's Heroes inserts at least get me a couple of cards closer.

I hope you enjoyed this random smattering of cardboard.  Check back tomorrow for a much more organized countdown of the best cards of the year!
Posted by shoeboxlegends at 12:15 PM

That Terry Sawchuck is cool. I like the Darth Vader insert. I think it is part of an insert set that actually was a part of different Star Wars set. Fun post.

The Deleted Scenes! I love it! Great idea for a post. Blog Bat-Around? Regardless... I might have to use this idea... and of course give you full credit.

P.S. Love the Pro Set hockey from the early 90's. And Cherry's suit is fantastic.

I like this idea. I’ve got a scan folder that I just cleared out for the exact same reason of not wanting to carry them over to a new year.