Making some good progress with my slow-burn 1950 Bowman set build after a long break.  Let's look at the third card to be added this month! 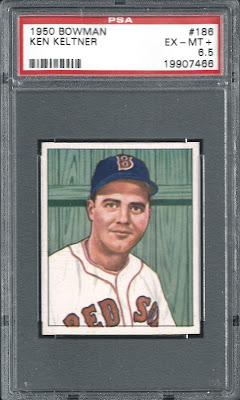 It's another Red Sox player too, third baseman Ken Keltner.  This one is sort of an anomaly, as Keltner actually played all but the final 13 games of his career with the Cleveland Indians.  Those final 13 games came in a Boston uniform in 1950, and then Ken hung up the spikes.

During his long stint with the Indians Ken was extremely successful.  He played in the era before the Gold Glove Award existed, but would almost certainly have won a few given that he was viewed as one of the premier fielding third basemen of his day.  Keltner was also a 7x All-Star, won a World Series with the team in 1948, and received MVP votes in five different seasons. 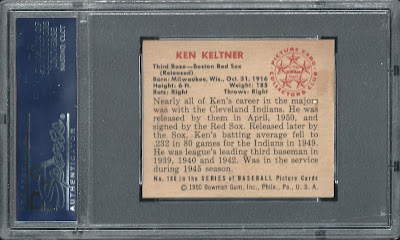 I picked up this card long ago, and it's probably the finest-condition 1950 Bowman in my entire collection.  It's in such good shape that it kind of sticks out among my small grouping of other cards from the set at this point.

I love the obscurity of this one, it's great to land a card of a player who was extremely successful with another franchise, and barely snuck in a quick stint with Boston at the very end of his career.  Great card, up to 14 in total now from one of my favorite sets of the '50s.

Very nice Keltner! I did not know he ended his career with a short-term stop in Boston. That fact must have eluded me when I was writing the Indians' All-Time Team post, but it shouldn't be a surprise considering how many star players played for both Boston and Cleveland.

I'm learning a lot about the players from these posts. Nicely done. Also, great wooden fence in the background.

It's crazy to think that this guy was a 7x MLB All-Star and I've never heard of him. Thank you for teaching me something new about the sport I love to collect the most.