I know soccer is not exactly likely to drive up the view count on any post here on the blog, but this week's Signature Sundays subject is one that I'm really happy to finally have represented in my collection and so wanted to show off here nonetheless... 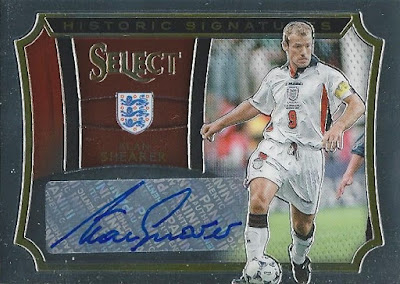 It's a little hard to make out just above the signature there, but this is England's Alan Shearer!  Although he played before I was a fan of the international game, I've long wanted a significant card of his for one reason and one reason alone.  He is the all-time leading goal-scorer in the English Premier League, which is the league that I've followed most closely, for about the past ten years now.

Alan netted an impressive 260 career Premier League goals across 15 campaigns from 1992 through 2006.  That's enough to give him the career lead by a wide margin, as the next closest scorer is Wayne Rooney with 208 career Premier League goals, and he left the league back in 2018.  As for active players, Sergio Aguero of Manchester City has 180, and Harry Kane of Tottenham Hotspur has just over 150.  I actually think Kane has the better shot of the two of them, as Aguero seems to miss a lot of games.

While a sticker autograph, the signature itself on this card is actually very nice in this case. 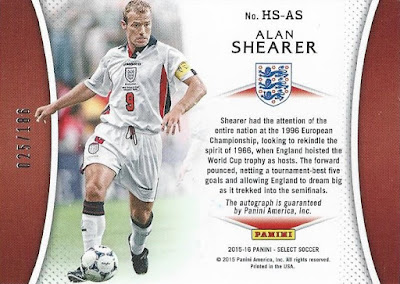 Here's a look at the back where, because it's Panini, we see the same photograph recycled from the front.

That's all I've got for now.  Back to watching the DVR'd Premier League action from earlier today!

Thanks as always for stopping by, and stay safe out there...

Posted by shoeboxlegends at 6:45 PM

Did he play for Manchester United? One of my ex-girlfriends was a big English soccer fan (especially Man U.) and Shearer's name rings a bell. There was another bloke with a similar name though- Shearingham maybe - so I'm not even certain I've heard of Shearer!

Not familiar with Shearer... but that's pretty awesome that he holds the record for goals. Gotta imagine with how popular soccer cards are right now... that this autograph is worth a pretty penny.

Thanks guys, appreciate the readership and comments, especially on a soccer post!

Chris, I don't believe he ever played for ManU, but he was on the English National Team for many years.

Fuji, I actually got this card for what I felt was a bargain this summer, I believe it was around $50 shipped if memory serves...

Just making my way back to catching up on the reading list for the past few weeks. This is a beautiful card, sticker not withstanding. Hope you were able to add this for a reasonable price since the soccer collecting world hasn't seemed to give too much love to legends not named Maradona or Pele. Congrats!