I've been somewhat absent here over the past couple of weeks, but it's not because I haven't had any time for my hobby.  I've actually had a decent amount of hobby time, but have been spending it organizing and condensing my collection and my home office/card room.  Here are some cool cards that I ran across, scanned and added to my organized collection proper during that process... 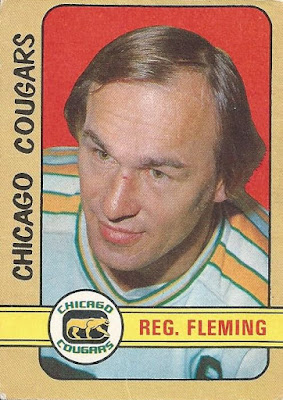 Still chugging away on these '72-73 O-Pee-Chee hockey high number WHA cards.  Tough little buggers, but I've got another trio to share today, starting with Reg Fleming of the Chicago Cougars!  You really have to question what the folks at O-Pee-Chee were doing with photograph selection and cropping here, but since I'm trying to complete the entire WHA portion of this set, I needed a copy of this card regardless. 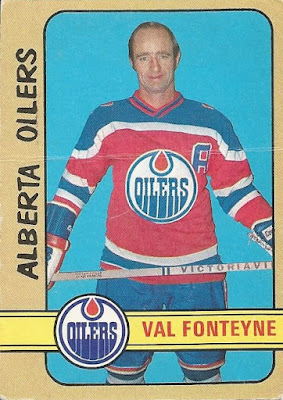 Before the Edmonton Oilers, there was the Alberta Oilers.  They were the final stop in a lengthy professional hockey career for Val Fonteyne, who began playing in the NHL all the way back in the 1950s!  If you look closely, there's a giant crease running across this card, just below Val's shoulders.  Do I care?  Not in the least.  This is a perfectly fine, visually appealing example for my little set. 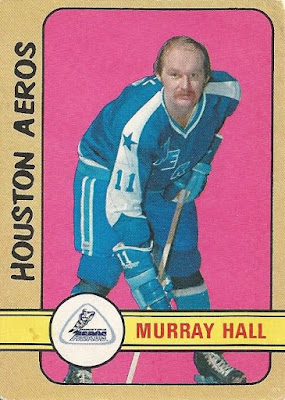 Last but not least, Murray Hall of the Houston Aeros.  The bright blue of the Aeros gear, combined with the jarring hot pink background, really makes this card tough on the eyes.  Murray broke into the NHL in the early '60s with Chicago, and played in just about every game of the first four seasons of Houston Aeros hockey in the WHA.

There are a total of 51 of these WHA cards at the tail end of the '72-73 O-Pee-Chee checklist.  With this trio in hand I'm now up to 21 of them in my collection, with an even 30 left to go.  I think I still have a small handful in my "to be processed" box, but probably only enough to get me to the halfway point or so.  Next year I'm going to have to make a concerted effort to track down the final couple dozen.  It won't be easy, but this is one set I absolutely plan to finish someday. 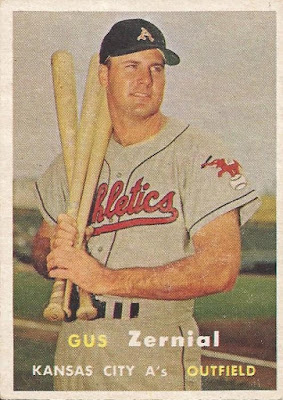 Next up, a trio of 1957 Topps baseball singles that I picked up in a local antiques shop at least a couple of years ago now.  While I'm not really pursuing the '57 set with that much vigor, I couldn't pass up Gus Zernial's pythons holding not one, but three bats.  Great image on this one, a fantastic look at the Athletics' elephant shoulder patch as well. 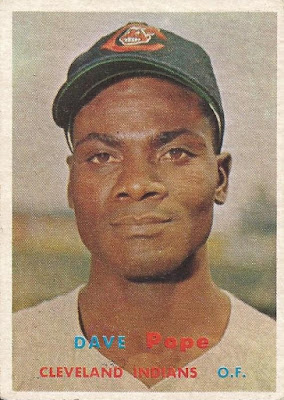 Don't really know much about Dave Pope, but I like this simple portrait shot.  I feel like this particular Cleveland Indians cap, with Chief Wahoo behind the large C, isn't one you see all that often.  Maybe that's just me, though. 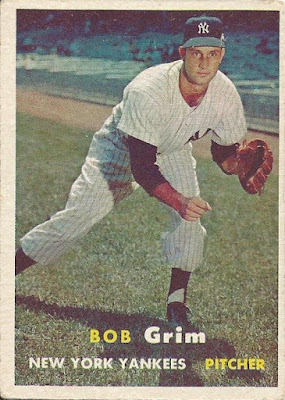 Rounding out the trio of '57 Topps cards is this Bob Grim.  Picked this one up because you just don't miss a chance to grab '50s Yankees cards when the price is reasonable.  If I someday get serious about a '57 Topps set pursuit, I'll be glad to have this card already crossed off of my list. 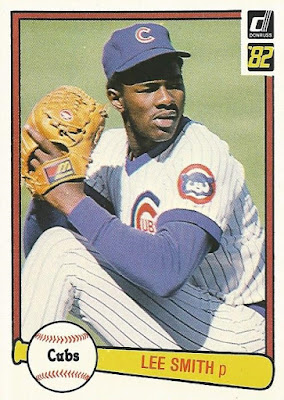 I picked this one up at the same shop as the '57s, because like many collectors I'm a sucker for rookie cards of HOFers.  It was only 75 cents, so I just couldn't leave it behind.  Sadly, I returned to this antiques store a month or two ago to quickly grab a birthday present for my wife, and noticed their card selection was all but gone.  Glad I grabbed what I did when I did, I suppose.

Switching topics, one of my favorite things to do on cold, winter evenings when my wife has fallen asleep or is watching a Netflix show, is to browse Sportlots and put together a cheap order.  Many sellers offer bargain shipping via PWE if you pick up four cards or less, so I enjoy putting these together.  It's nice to find surprise cards in the mailbox alongside bills and junk mail, especially when I can often assemble a PWE for just a couple of dollars shipped.

Here are the contents one such package that arrived just a couple of weeks ago... 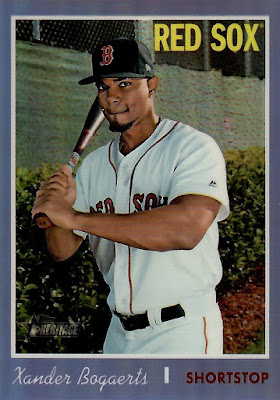 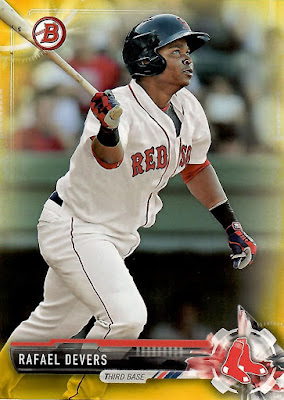 After Xander, and now that Mookie Betts has moved on, Rafael Devers is my favorite player to collect on the Red Sox.  With this 2017 Bowman Prospects yellow parallel counted for, I'm up to 48 unique cards of Devers in my collection now.  I have quite a few others in my COMC to post chest as well.  I'd like to get up to around 100 or so cards of the young star at some point, but I'm not in a serious rush.  He's at times inconsistent in the field, but his bat is so good that I think he has a shot to become a legitimate MLB star.  Don't forget, he led the American League in doubles and total bases during the last "normal" season in 2019.

For now, this one checked the box as far as my love of colorful cardboard and, like the Xander Heritage Purple Refractor, was less than a dollar.  Not too bad for a pre-rookie card parallel of one of the game's best young hitters.  Speaking of which... 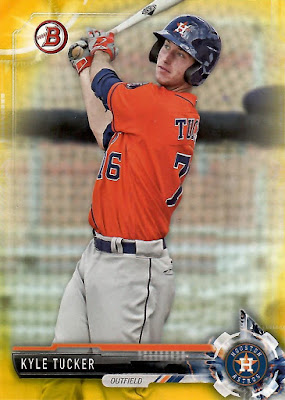 ...I wanted to find two other cards from the seller's inventory to go with the Bogaerts and Devers, since as I mentioned the shipping was the same for four cards as it was for a pair.

I found a couple of cards of one of my favorite young non-Red Sox players, Kyle Tucker of the Astros, available for pocket change.  Kyle doesn't seem to be as appreciated yet among the national collecting base as some other young stars like Ronald Acuna Jr and Fernando Tatis, Jr, which is great for me as his cards are still very attainable.  I paid 38 cents for this 2017 Bowman Prospects yellow parallel.

I'm hoping Kyle, who is still just 23 years old, can get a couple of 25/30-HR, 100-RBI seasons under his belt soon.  If so this will be a great pick-up in retrospect, if not I certainly didn't break the bank on it.  Pocket-change prospecting.  Might have to turn that into a recurring series of blog posts actually, has a nice ring to it! 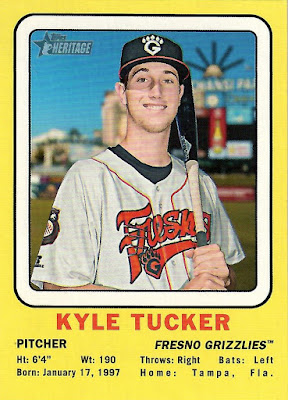 Here's the final card from that Sportlots order, another yellow Kyle Tucker.  Paid the site-minimum 18 cents for this Collector's Card insert from 2018 Topps Heritage Minor League.  I like it because I'm fairly certain it's my very first card of the Fresno Grizzlies!  Not only that, but you get a good (if fuzzy) look at the Grizzlies' ballpark, Chukchansi Park, in the background there. 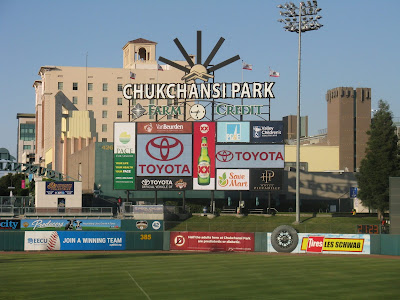 This post's getting a little long, so we'll call it here for today.  Thanks for stopping by to check out some of the most recent cards to enter into my collection.

There are stacks of amazing cards that have yet to see the blog laying all over the place here at Shoebox Legends World Headquarters, so check back frequently over the winter if you're bored.  Until then, thanks as always for stopping by!

Posted by shoeboxlegends at 4:00 PM

It's usually the C or Chief Wahoo. Not both.

Organizing and condensing are two things I need to do very soon. Love that Zernial. All of those bats would go perfectly with all of the balls on his 1952 Topps card.

I had no idea that the Oilers were every called the Alberta Oilers. Apparently it wasn't even the original plan...they were going to be Edmonton, but then the Calgary team moved, so they went with Alberta thinking they'd play some home games in Calgary, which never happened. Ah, new leagues....

I've never been a big fan of Bowman, but something about that yellow Devers really looks nice, almost like he's bathed in sunlight.

I've just decided that I need more Chicago Cougars and Houston Aeros in my Dead Parrot binder. I'll have to get on that when I'm back to buying cards.