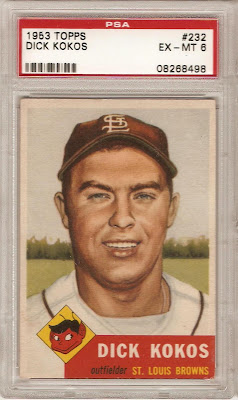 Dick is the first high-numbered card I've reviewed. Like the 1952 set, the high-numbered 1953 cards demand a premium, although the difference in price is not as drastic as it is in the '52 set. Nonetheless, these cards are going to make completing the set that much more difficult.

Dick had a relatively short career in the majors. He appeared in a total of only 475 games throughout 5 different seasons. Those 5 seasons were largely unremarkable. 1953 was about par for the course. In 107 games, Dick hit for .241 with 13 HR and 38 RBI, not exactly a banner year.

Maybe Dick was your classic "AAAA" player, and just didn't quite have what it took to cut it in the big leagues. Maybe he was rushed into the majors and wasn't given time to develop. He was after all only 20 years old when he debuted in 1948 for the Browns. Dick did connect for 23 round trippers and 28 doubles in 1949, but unfortunately he lead the American League in strikeouts with 91. Sadly, Dick passed away at age 58...

Posted by shoeboxlegends at 9:12 PM