Generally speaking, you can group me in with the collectors who are only mildly excited at best at the prospect of acquiring a new relic or game-used card.  While they may have been interesting ten or twenty years ago, the whole concept seems to have been watered down by "event worn" relics and other such gimmicks, and in some cases even questionable authenticity.

Last month though, my buddy Dave H of Wax Stain Rookie posted a relic card that had me absolutely drooling.  Check out this image that I borrowed from his post: 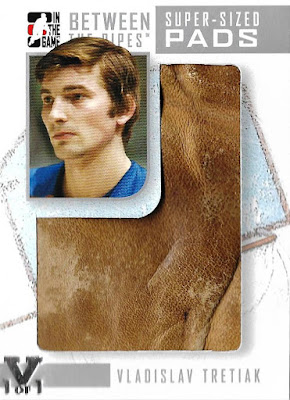 Holy crap!  I had no idea until reading Dave's post that In The Game had released these "Super-Sized Pads" cards as part of their 'Between the Pipes' set in 2008-09, but I was immediately floored by the concept.  Not only was Dave's Tretiak relic here one of the bigger pieces of material that I'd ever seen on a game-used card, but I just fell in love with the concept of a big ol' swatch of the classic brown goalie pads that are so adored by fans of the old school era of the NHL.

I knew right away that I just had to make an attempt to land one of these for my own hockey card collection.  They're not the easiest cards to find I found out; I believe they were limited to just 30 copies each.  Understandable I guess given the size of the pad "chunk" used in the making of each card.

I quickly zeroed in on the card I wanted most from this set, and within a couple of days had tracked one down.  Check this baby out! 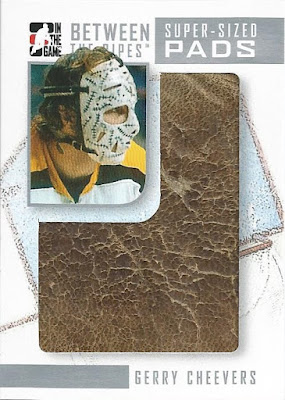 I've had this card in hand for a few days now and I'm still just fascinated by it.  Cheevers is the player I wanted most from the short, 12-card checklist.  The selection for this relic set spans a few eras, and since the goalie pad has evolved quite a bit over the years there's a range of different types of pad to be found among these inserts.  For example I just watched a Patrick Roy end on eBay (without any bids) that featured bright blue pad presumably from his time with the Canadiens.  Cheevers' card features the glorious old school brown leather pad though, which is what I thought was so cool about Dave's card to begin with, and is certainly what drew me to this one.

I don't mind sharing that I shelled out close to $40 for this card, which is more than a quarter of my monthly allocated hobby budget in one shot.  I wouldn't say I got a "steal" on it, but I do think I paid about fair market price given what I've seen a couple of others go for.  Besides, this is the type of card that's rare enough that you could go many months or years without seeing another copy of it.  This is easily the most I've ever spent on a relic or game-used card, and probably always will be, but I don't have any buyer's remorse here at all. 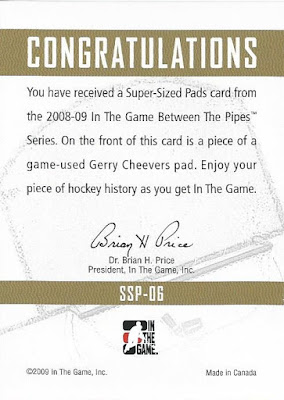 Here's the back, citing the pad as game-used.  These cards are fairly thick but not outrageous.  I've got mine in a 75pt one-touch magnetic holder for those of you that that means anything to.

Here's one last look, just beyond awesome.  I'm really enamored with this one, looking back on it this has to be in my top three hockey acquisitions of 2017.  It's just cool to think about how many pucks may have bounced off that square of pad, and of whose sticks those shots may have come off of.  I've been collecting again for over ten years now and I haven't found too many hockey cards in all that time that are more unique or interesting than this one is.

Seemed like today was the perfect day to show it off too, with Cheevers' classic mask making a prominent appearance here.  Dave, thanks for the inspiration to track down this beauty, and Happy Halloween everyone!

Do you have a favorite relic or game-used card that stands out above all others within your collection?  If so I'd love to hear about it in the comments...
Posted by shoeboxlegends at 10:00 AM

That is VERY cool! I'm going to have to keep my eyes open for some of them. $40 is about twice my monthly budget average for the hobby, but those are just too cool.

My favorite relic is one I actually pulled, a piece of wood from the USS Constitution. They apply a new deck from time to time, and Topps got their hands on some of the wood removed in 1973, and put it on a card in 2009. It's the second card shown here: http://www.tradingcarddb.com/List.cfm/lid/254/My-Greatest-Pack-Pulls

Those are gloriously unique - relic cards, as you said, are so overdone, so it's nice to see some innovation and something new come out of the tired concept.

I'm with you in that relic cards rarely do anything for me anymore. However, ITG always did a great job under the previous owner and still is as a member of the Leaf Trading Cards stable. The casual collector doesn't like them because of a lack of logos, but I feel that most hardcore collectors love ITG. Fantastic acquisition!

Those are absolutely amazing! I love the mask he's wearing too!

WOW!!!!! I've been waiting for companies to do more unique relics. This is just what the doctor ordered. AWESOME!!!!

Sweet! When it comes to hockey, my favorite memorabilia card would be my 2000 BAP Vezina goalie pad that my buddy pulled and traded to me back in the day.

That is an incredible addition, congrats!

Love that Gary Cheevers card. Great job. I don't have any relic cards yet that have caught my fancy. Probably because they are from players that don't do much for me. But it will happen. I'll come across that card that I really like.

My pleasure!!! Dear goodness that is a sweet piece of leather you have there. Great addition and serendipitous timing for you to find that one when you did :)