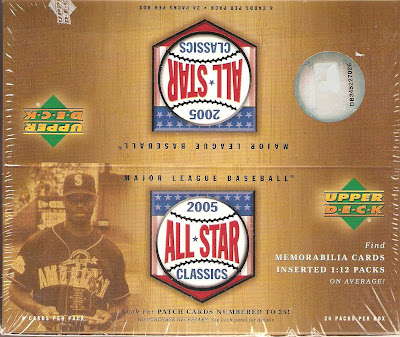 Recently I was scouring the bargain bin at the local card shop looking for something different to rip for a change. I picked up a pack of 2005 Upper Deck All-Star Classics for $2.00, for no reason other than the fact that I'd never heard of this set before.

I absolutely loved the cards, and decided to pick up a 24-pack box. I had a couple of reasons for this. First, I've decided not to pursue 2008 Heritage as I'm still working on my 2007 Heritage set, plus Topps has turned me off a bit with all of the SPs and variations. Although I love the look of the '59 Topps cards, I realize that even after 3 or 4 hobby boxes of 2008 Heritage I'd be out over $200 and still probably be well short of the set. In stark contrast to this, 2005 UD All-Star Classics has a 100 card base set with no short prints. At 8 cards per pack and 24 packs in the box I'm almost guaranteed to get a complete set out of this, right? Best of all, I picked up this box on Ebay for about 1/3 the cost of a 2008 Heritage hobby box.

Another reason I was sold on this box was that there are 25 Legendary All-Star cards in the base set (the DiMaggio pictured above is an example). For someone who loves vintage cards and the heroes of yesteryear, these cards are absolutely outstanding, in my opinion some of the nicer looking modern cards that I've pulled since I got back into collecting.

Finally, the cards in general are just beautiful. They are printed on nice, thick, glossy cardstock and showcase the excellent and crisp photography that Upper Deck is known for. I also really appreciate the fact that most of the cards offer great in-game action shots. This was a plus for me, especially with the Legendary All-Star cards. Many of my original vintage cards show the players posing for a photograph and it was really cool to open each pack and see some of these legendary names in action.

Ok, enough of the justification for purchasing the box. Here's a breakdown of what you get in each pack.

Pros: Well, I've already hit on the positive aspects of the product, but in summary great looking, high quality cards, very reasonable price, and a small set with no short prints. I also like the fact that Upper Deck included a thick cardboard filler in the packs that did not contain game-used cards to prevent pack searching. Two memoribilia cards per box on average is also a plus (I pulled this Dontrelle Willis as well as a Moises Alou):

This set also had some very cool insert cards, I pulled an A-Rod gold parallel numbered to 499...

I also thought the All-Star Classics box scores insert set was pretty cool. Each card gives you a complete box score from a past All-Star game. I got the 1994 game in this box...

Cons: My only major gripe is that at first, it seemed as though collation was going to be absolutely terrible. No more than 6 packs into the box my doubles pile was just as large as my set pile. Not a good sign at all. The cards were literally sorted in the exact same manner in each pack. After a few packs, you could look at the first card in the pack and know exactly which 7 cards were going to follow (6 if you happened to pull an insert).

At one point, there were two packs that were laying side by side right next to each other in the tray that contained the exact same 8 cards. This leveled off as I made my way through the box and didn't end up being a huge problem in the end, but I would've been pretty angry back in 2005 had I purchased 2 packs of this and ended up with identical packs. At the end, I had one pack to go and needed exactly 8 cards to complete my set. The final pack contained the exact 8 cards that I needed, so it seems as though Upper Deck sorted these cards so that you would be guaranteed to end up with a set if you purchased a 24-pack box. Turns out the collation wasn't so bad after all.

Suggestions: I can only think of one possible suggestion that would've made this box better. It would've been great if they had seeded game-used cards of the Legendary All-Stars, maybe seeded 1:24 packs or something like that.

Here's what I ended up with:

Overall I think this is a great product at a great price. This box break reminded me of why I love collecting. Maybe these aren't the world's most desirable cards, but they were very affordable and put a huge smile on my face more than once while ripping through the packs.

If you like what you've seen here, I've already posted all 83 of my doubles in my Available for Trade post, just contact me if you're interested. I had also purchased a second 24-pack box of this stuff in case I wasn't able to complete a set with the first one, I've added that to the trade list as well...
Posted by shoeboxlegends at 6:14 PM

That's a nice looking set. That's great that you were able to complete the set in one box.