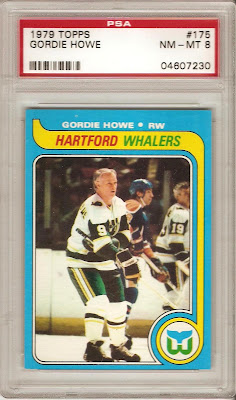 This is far and away one of my favorite hockey cards, in fact at the current moment in time if I could keep only 10 cards I would probably hang onto this one. There are many reasons why I like this card so much. First of all, as everyone knows "Mr. Hockey" is a legend. He ranks second all-time in regular season goals (801), eighth in assists (1,049) and third all-time in points scored (1,850 for those of you who are mathematically challenged). To get a graded 1970's card of this hall-of-famer for about the same price as a CD was a steal in my book.

I briefly met Gordie at an autograph signing at a local card show when I was about 10, which was a cool experience for a kid who played hockey and was obsessed with the sport. He was very polite and patient in dealing with the crowds and I still have the Detroit Red Wings puck signed in silver sharpie kicking around somewhere.

Probably the best thing about this card is that it's from the one and only year in which Gordie played for the Hartford Whalers, my favorite (now-defunct) hockey team. The Whalers never had much success and eventually moved the franchise and became the Carolina Hurricanes, due to financial problems I'm pretty sure. Every year though, my parents would come up with some money and take my brothers and I to a couple of Hartford Whalers games, so I have some really fond memories from those times. Getting to see Wayne Gretzky play was a definite highlight!

If you're looking at this card for the first time and find yourself saying "he seriously looks like my grandfather", I don't blame you one bit. Amazingly, Gordie was over 50 years old in 1979, the last year he would play in the NHL. If you think he was a decoy used to sell tickets though, think again. At the age of 51, Gordie would net 15 goals and 26 assists for 41 points in 80 games. Not too shabby for a guy in his 50's...

Posted by shoeboxlegends at 11:07 PM

that was his last year in the NHL, and, that was also the year he played with his two sons on the same team.
A first for the NHL....