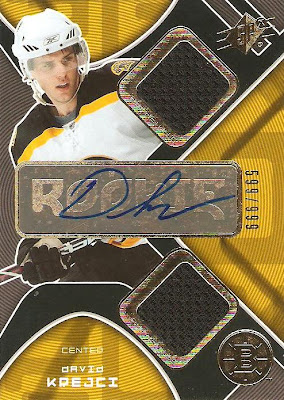 I consider myself a set collector, and don't usually go for high-end product or chase the big pull, so I didn't buy any 2007 Upper Deck SPX hockey at $120+ a box last year. But when I saw this card on Ebay a month or so ago, I had to go for it. I decided on my limit, placed my bid, and was shocked when I won the card for under $10. I can probably count on 2 hands the number of autographed cards I have in my collection, and I think this is the only dual-patch, autographed and numbered card that I own.

I watch every single Bruins game courtesy of NESN and David Krejci has quickly become one of my favorite hockey players. This guy is only 22 years old and in his second season in the league, and he's already one of the most exciting players I've watched. I had a feeling he was going to explode offensively this season, and I grabbed this card and a couple of others just in time. A lot of the national focus on the Bruins has centered around Phil Kessel, and deservedly so as he goes into tonight's contest against the New Jersey Devils with an 18-game point streak.

To me though, Krejci is just as exciting a player as Kessel. In his last three games he notched his first career hat trick in a Bruins win over Toronto, scored a key go-ahead goal in the second period in a Bruins win against the Carolina Hurricanes, and tallied 3 first-period assists in Sunday's win over the St. Louis Blues. The streak has bumped him up to 16th in the league in scoring, and I think people are starting to take notice. This very same card is up for auction on Ebay and is already going for a few bucks more than I paid for it with a couple of days left.

This has instantly become one of my favorite hockey cards, one that I will enjoy looking at for years to come. If you haven't had a chance to see this guy play, here's a clip of his first career hat-trick the other night against Toronto. The second goal especially is a thing of beauty...

Posted by shoeboxlegends at 9:15 AM