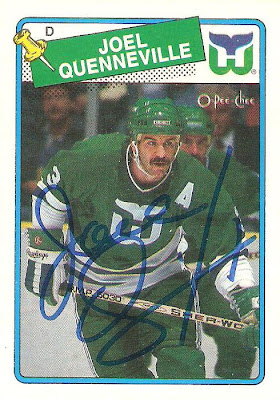 Today's Whalers card is another prime example of the generosity of card collectors out there. Back in July, Sal from Puck Junk emailed me because he was heading to the Blackhawks convention and wanted to know if there was anyone I might like an autograph from. I immediately thought of head coach Joel Quenneville, who served 6+ years on the Whalers' roster in the 1980's. There were no guarantees obviously, but I dug up Joel's 1988-89 O-Pee-Chee card and threw it in with a small package of cards I was sending to Sal.

Fast forward a couple of weeks and I received this autographed beauty back! Best of all, Sal let me know that Quenneville was excited to see two Whalers cards in a row (Sal's girlfriend also got a Whalers card signed) and said "Alright, another Whalers card! The Whale lives on!"

Sal, your generosity is really appreciated. This card is priceless as far as I'm concerned, and will always be one of my favorite Whalers cards. Thanks again! If you missed Sal's writeup on the convention, check it out. He's got everything from cards to photos to paintings to videos, and a sweet Stan Mikita 8" x 10".
Posted by shoeboxlegends at 10:15 PM

you need to get a .wav file or something of that effin Whalers fight song to play whenever someone comes on to your blog.