Even though vintage cards appeal to me most, like many collectors I can't seem to resist a nice shiny refractor. To me, the 1993 Finest refractors are still king. Unless I'm mistaken they were the first refractors produced. Falling at one per box in what was a very premium product for 1993, these were highly sought after from the start. Over the years they have definitely held their value and are still highly sought after.

A few months back I was lucky enough to add Will Clark's to my growing player collection: 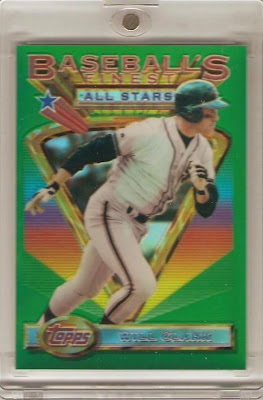 I've read that there are less than 250 copies of each of these floating around, but I'm not sure if that's accurate. To give you some perspective on how popular these still are, a Lou Whitaker recently sold for $25 on eBay. Not too long before that a Reggie Jefferson went for $13. Here's a scan of the front of the card: 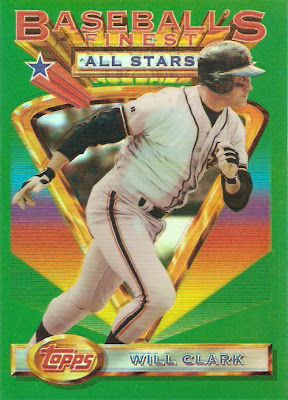 I love the design used for this set, although I'm probably biased since these were released when I was 11 years old, so they're right in my collecting wheelhouse. I could never afford any at the time, but a couple of years back I snagged a complete set on eBay. Here's a scan of the front of my base Clark card for comparison: 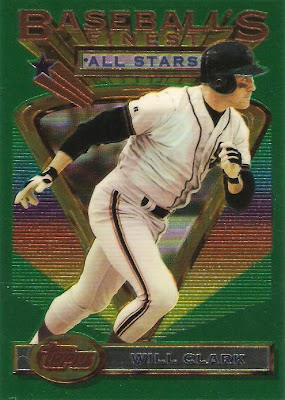 Pretty easy to spot the difference between base and refractor by scanning. The refractors are actually pretty easy to tell apart by naked eye in just about any light. That's a good thing because in 1993 there was nothing on the back to differentiate a refractor in any way: 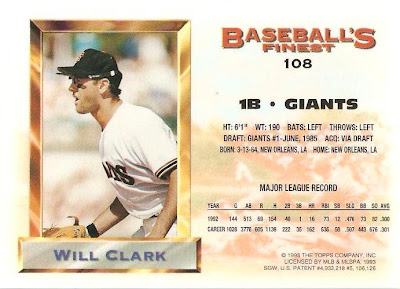 Do any of you have any 1993 Finest refractors? What's your favorite refractor?
Posted by shoeboxlegends at 7:56 PM

I don't know if I have that one, but he is my all-time favorite player. Nice pickup.

Those refractors are great. I've been looking to pickup the Bo Jackson, Don Mattingly and Doc Gooden.

i have Alomar, McGriff, and Jefferies