Out With The New, In With The Old - Johnny Pesky Edition

Since my collection is largely focused on vintage, my first thought on the rare occasion where I pull something half-way decent from a modern pack is to flip it. I've done this a few times recently, and have gotten some pretty nice stuff in return. I figure I'll do a couple of posts showing what I got rid of and what I got back in return, and you can decide if I made out well or am a total fool.

When Panini released a Score hockey set a few months back, I was excited like many collectors. I picked up 3 hobby boxes since I was able to find them at under $30 bucks a piece, and got a large chunk of the set taken care of. To be honest, the cards lost their appeal pretty quickly for me. I still plan to finish off the set, but I certainly didn't have a need for this card: 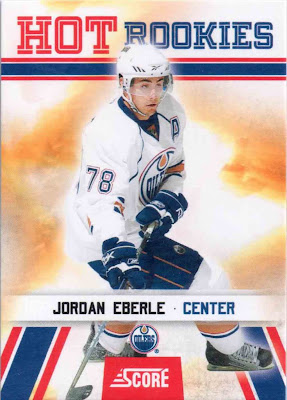 2010-11 Score - #556 - Jordan Eberle Hot Rookies - Short Print
I'm not sure what rate these short-printed Hot Rookie cards fall at, but this was the only one I pulled from my 3 boxes. Had it been Tyler Seguin I likely would've held onto it, but since there's no way I'm going to collect all 10 of these I decided to part with it. I must have timed my sale pretty poorly though, as I collected only about $16 if memory serves me (recent auctions for the card have ended at around $30).

I decided to utilize my Paypal funds from the sale to add to my vintage Red Sox collection. There was one player in particular I sought out, a huge part of the franchise's history that was inexplicably missing from my collection. After a ton of searching I settled on this: 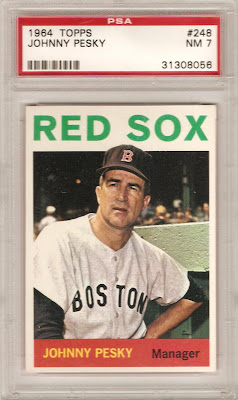 That's a beautiful card if I do say so myself. Pesky has basically devoted his entire working life to the Red Sox organization, as a player, manager, adviser, etc. I mean the right field foul pole at Fenway Park is named after the guy. Every good Red Sox collection needs at least one Johnny Pesky card. This is one of the nicer ones I've seen, I think the photo is cool and combined with the 1964 design it makes for a pretty visually appealing card. Believe it or not I snagged this in a Buy-it-Now auction for a mere $8. Can you believe that? Since I had some leftover cash I sprang for a second Pesky: 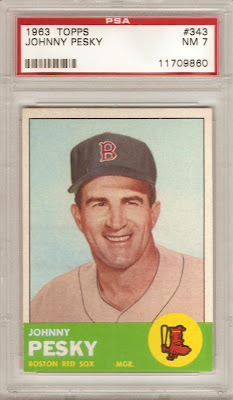 All in all I had to chip in about $5 in addition to what I sold the Eberle card for. So, which would you rather have? The two vintage Pesky's or the Eberle with $5 in pocket?
Posted by shoeboxlegends at 7:00 PM

Labels: Out With The New In With The Old

Whenever you can turn a 10/11 card into two vintage cards in great shape, the decision is easy: vintage everyday, all day.

I would have given you 20 for Eberle!