Out With The New, In With The Old - Sal Edition

Time for the second "Out With The New, In With The Old" post. This one's a quickie. A few months back I purchased just a single pack of 2010-11 Upper Deck hockey (still the only 2010-11 Upper Deck cards I've purchased so far), and was fortunate enough to pull a P.K. Subban Young Guns short print. I had no real use for the card, and was going to list in on eBay until I found out that my buddy Sal from Puck Junk needed it. I would much rather see the Subban end up in Sal's collection than sell it to some stranger on eBay so I sent it off to him. In return, Sal sent me this: 1968-69 Topps - #7 - Phil Esposito
This is a welcome addition to my Bruins collection, and is currently my oldest Phil Esposito card. It will go nicely with the lot of 68-69 Topps I picked up at a card show last fall. I now have 17 cards from this 132 card set. I'll continue picking these up as I see them, I could see this being the first 1960's Topps hockey set I complete eventually. 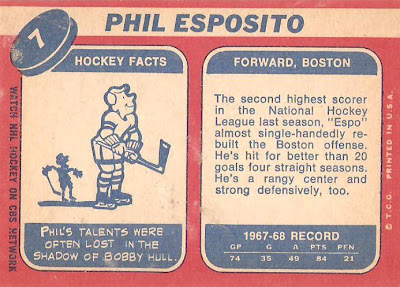 The cartoon on the back is kind of funny, as we see Phil depicted in the shadow of the great Bobby Hull. Actually, this is sort of a coincidence as it foreshadows my 3rd and final "Out With The New, In With The Old" post, which I hope to have up later this week.

All in all this was a great trade for me. I unloaded a modern short print of a rotten Canadien for a nice vintage card of a Hall-of-Fame Bruin...doesn't get much better than that. Thanks for the awesome card Sal, glad I could help you with your 2010-11 set!
Posted by shoeboxlegends at 1:30 PM

Labels: Hockey Cards, Out With The New In With The Old, Trades

wow. that is my kind of trade

I cannot believe that it was not offered to me. Unbelievable! Robbed! I was robbed!

Canuck, you pulled one before I did!

My memory's not that bad!

Any trade where I can get rid of a double AND get a card I need is win-win for me.