One of my favorite hockey players as a kid, Peter Forsberg, recently hung up the skates for good. Here's a quick look at his career through cards. 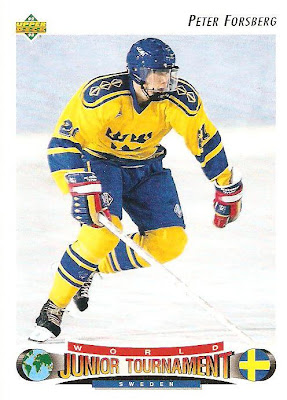 Peter debuted and played much of his early career in the Elitserien, Sweden's top professional hockey league. He debuted with Modo Hockey in the 1989-90 season at age 16 (just a single game with the senior club). The following season he saw action in 23 games with the senior team. Forsberg was then taken 6th overall by the Philadelphia Flyers in the 1991 NHL Entry Draft. He would play with Modo in Sweden for a few more seasons though, during which time he was dealt by the Flyers to the Quebec Nordiques as part of the lopsided deal that sent disgruntled holdout Eric Lindros to Philadelphia. 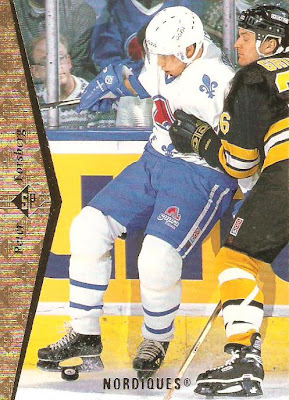 Once the lockout ended and the 1994-95 season got underway, Forsberg made his NHL debut with the Nordiques. His career in North America got off to an impressive start. In his rookie season he racked up 50 points in 47 games, was noted for his excellent all-around physical play, was named to the NHL All-Rookie Team, and captured the Calder Memorial Trophy for Rookie of the Year. Following the 1994-95 season the Nordiques organization packed up and headed south to Colorado: 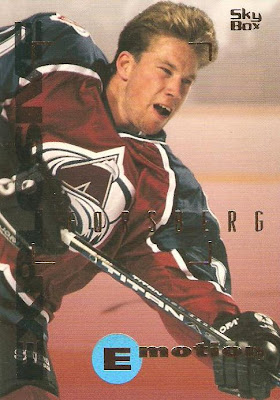 Hockey fans in Denver were spoiled as Forsberg, Joe Sakic and the rest of the stacked Colorado Avalanche team captured a Pacific Division title in their first season. Forsberg enjoyed the best season of his career, with highs in goals (30), assists (86) and points (116). His domination would continue in the playoffs as he racked up 21 points. The Avalanche would defeat the Florida Panthers in the Stanley Cup finals, bringing a Cup to Colorado.

Peter enjoyed a few more seasons as a top notch scorer with the Avalanche. In 2001 the team would win their second Stanley Cup, although Forsberg would miss the latter part of the playoffs to have his spleen removed. This injury would also keep him out for the duration of the next season, although he returned for a fantastic run in the 2001-02 playoffs.

2002-03 saw Forsberg bring home some hardware as he captured the Art Ross Trophy with his league-leading 106 points, as well as the Hart Memorial Trophy for league MVP. Peter returned to play for Modo in Sweden (on a team with both Daniel and Henrik Sedin!) during the 2004-05 lockout. When NHL hockey resumed in 2005-06, the salary cap that had come out of negotiations forced Colorado to let Forsberg go, and he signed a two year deal with the team who had originally drafted him, the Philadelphia Flyers: 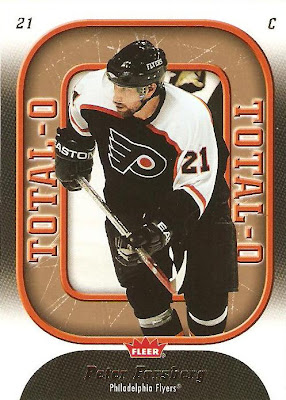 Although he briefly served as team captain, Forsberg missed significant time and was dealt at the trade deadline, before his two years were even up, to the Nashville Predators: 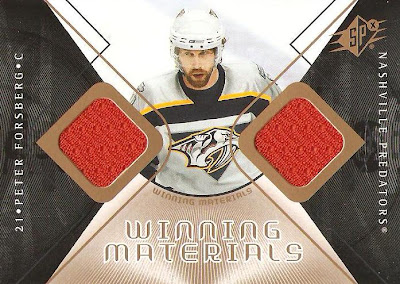 Forsberg finished out 2006-07 with Nashville, and then went unsigned for much of 2007-08, claiming he would not return to the NHL. He would end up signing with Colorado in February of 2008: 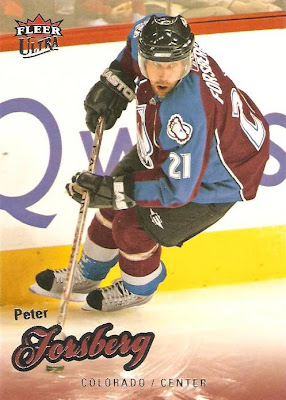 Injury hampered Peter again, and he ended up seeing action in just 9 games in 2007-08, although he did register an impressive 14 points. He would return to Modo for 2008-09 and 2009-10, but only played in 26 total games over both seasons. It appeared that his career had likely come to an end.

A couple months ago I was excited to learn that he was debating a return to the Colorado Avalanche. Then in early February it was announced that the Avs had signed him for the remainder of the season. The excitement ended quickly though, as he played just 17 minutes over two road games (0 points and a -2) before announcing he was done for good.

It was an impressive, long and successful career for Peter Forsberg. He led Sweden to an Ice Hockey World Hockey Championship gold medal in 1992, and two years later scored the winning shootout goal that gave team Sweden Olympic gold. It's one of the most famous goals ever scored in Olympic play, and was immortalized on a postage stamp in Sweden. Tack on a couple of Stanley Cup Championships, Calder, Art Ross and Hart trophies, and 885 career points with another 171 in the playoffs. When you factor in that he was considered by many to be the top two-way player of his time, and played physically on top of that, you've got a Hall-of-Famer if you ask me. What do you think?
Posted by shoeboxlegends at 11:56 AM

Lindros for Forsberg would have been a pretty fair deal.

I loved collecting Forsberg in the 90's... I had heard he made a comeback, but didn't know it lasted only a couple of games. We'll see him soon in the HOF.

I think forsberg deserves consideration for the hall along with Lindros. They were two of the most dominant players in the 90's. There careers were cut short due to injuries. It's scary what both could have done if they had stayed healthy!