I've got more to show from 1967ers' recent trade package, and aside from that I've received two additional packages in the mail over the last week from from Cards from the Crease and Life and Baseball Cards. Before I get to all of that though, here are two singles I picked up within the last month towards my 1974-75 Topps hockey set. 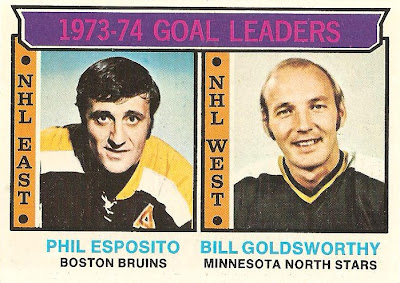 #1 - 1973-74 NHL Goal Leaders
It's always a nice feeling to pick up card #1 from a set you're chasing. This card isn't particularly difficult to find or anything, but it took me a while to get one for a price that I thought was reasonable. I paid about $3 shipped for this copy. 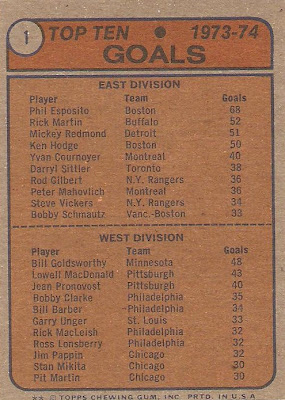 As you can see from the back, Phil Esposito outpaced the next closest goal scorer by a cool 16 goals in '73-74! 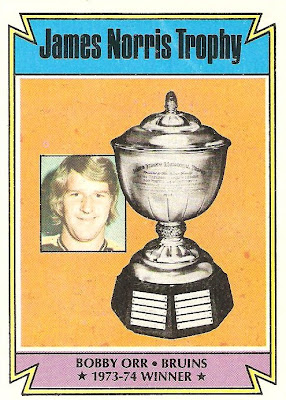 #248 - Norris Trophy Winner - Bobby Orr
Five out of the final ten cards I needed for this set feature the great Bobby Orr. Thanks to this eBay win though, and to Sal helping me out with Orr's base card from the set, I've only got 3 '74-75 Orr cards left to track down (NHL Assist Leaders, Boston Bruins Team Leaders, Orr All-Star). 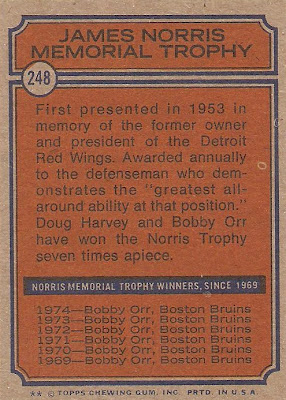 Orr would win the Norris again in 1974-75, his eighth consecutive (and final) Norris Trophy win.

I'm getting so close to the end with this set that I can taste it! With these two cards in hand I'm now seven cards away from completion. If I stay on track this should be my oldest completed hockey set within a couple of months here...
Posted by shoeboxlegends at 10:21 AM