Yesterday I showed a couple of 1972 O-Pee-Chee Red Sox cards from a recent package sent by 1967ers. Today, let's go back one year...here are four 1971 O-Pee-Chee beauties that were also in Chris' package: 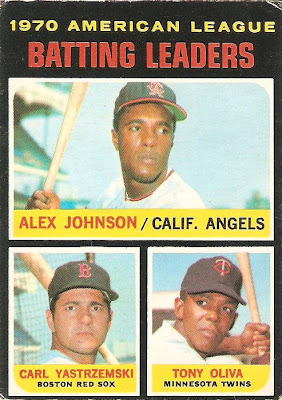 First up we have the AL Batting Leaders card. I have to confess that I definitely did not know that Alex Johnson led the AL in batting average in 1970. Yaz hit .329 just like Johnson did, but must have lost the title in a tie-breaker or something. As a result he shares the bottom portion of the card with Tony Oliva. 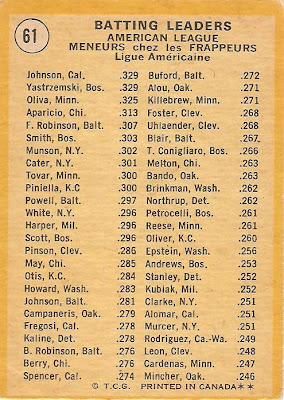 The back has the rest of the list beyond the top three. I've talked about this before, but it's always been comical to me just how many players get listed on the backs of leaders cards from the '60s and '70s. Anything above a .246 average was good enough for an appearance on this card... 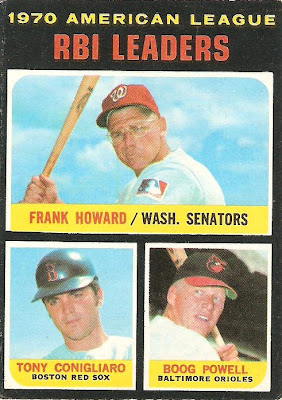 The AL RBI Leaders card also features a Red Sox player in the two spot, this time Tony Conigliaro, who belted 116 RBI in 1970. Frank Howard had a monster season though, and finished in the top spot with an impressive 126 RBI. 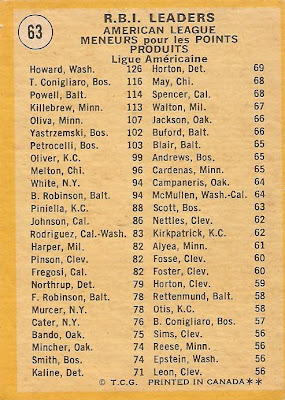 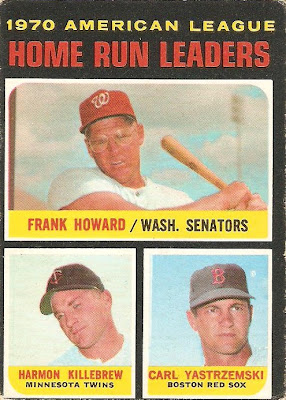 Chris covered the tri-fecta for American League hitting (average, home runs and RBI) with the leader cards in this package. This is my favorite of the three just because of the star power. I've been collecting Yaz for some time now, and Killebrew has always been an under-rated favorite of mine as well. 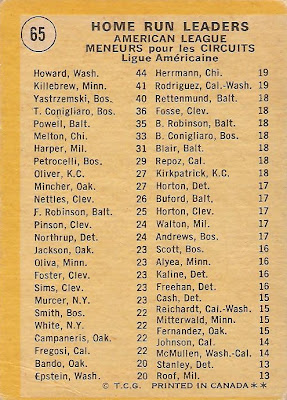 The Red Sox had a pretty good 1-2-3 power punch the season before, with Yaz, Tony Conigliaro and Rico Petrocelli all finishing in the top 8 for HR in the AL. Of course, this was a different era, and all it took was hitting 30 HR or so to put you near the top of your league. 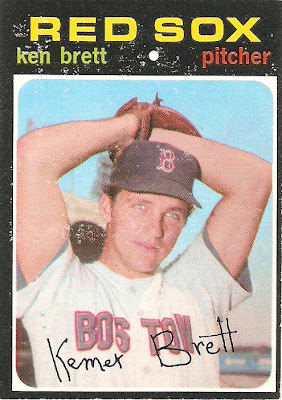 Finally we have card #89 of Ken Brett. Ken was George Brett's older brother, and it looks like he signed his Topps contract using his nickname, "Kemer". This is actually my favorite of the four '71 cards in Chris' package, for one reason: 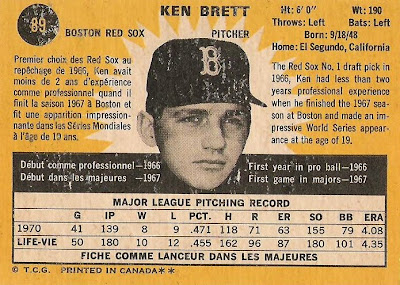 I've always admired the '71 O-Pee-Chee backs on other blogs, and this is the first one I've gotten to hold in hand. What a fantastic card back!

I've got some more goods from 1967ers on the way, stay tuned!
Posted by shoeboxlegends at 10:30 AM