The end of the year is rapidly approaching, and I'm still a few cards shy of my goal for the 1953 Topps Project, so let's take a look at another card today... 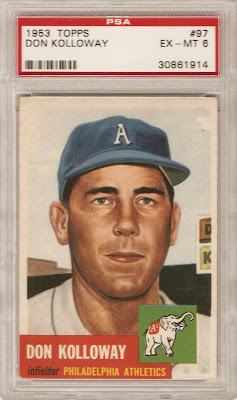 Don Kolloway was actually a fairly successful hitter early in his career, which began in 1940.  His most impressive feat in the batter's box was leading the AL with 40 doubles in 1942.  Don's most impressive feat in life came off the field though, as he represented the United States Army (29th Infantry Division) in World War II, seeing combat in Europe and earning a Bronze Star. 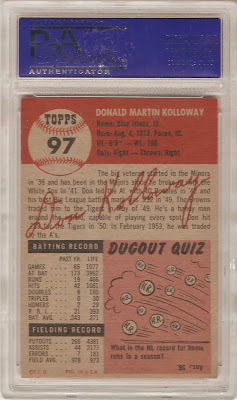 Don played a few more seasons after returning from military service...his 1953 season with the Philadelphia Athletics would actually be his last.  He owned and operated a tavern (called Kolloway's, in Illinois) later in his life after baseball, and passed away at age 75 back in 1994.