Let's celebrate the last Signature Sundays post of 2013 with a 10-pack of on-card autographs from 2012-13 Panini Classics Signatures... 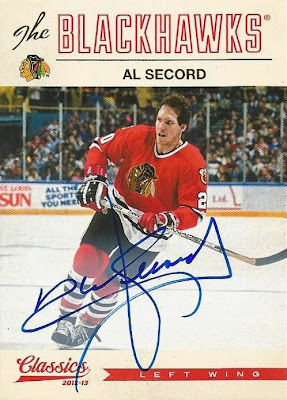 Kicking things off is Al Secord, who emerged as a talented scorer after the Boston Bruins, who had originally drafted him, dealt him to the 'Hawks.  He topped 40 goals 3 times, and even 50 once.  He wasn't afraid to mix it up either and spent plenty of time in the sin bin.  These days he's actually a pilot with American Airlines.  My cost?  $5.51. 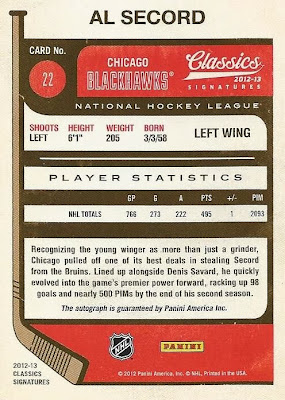 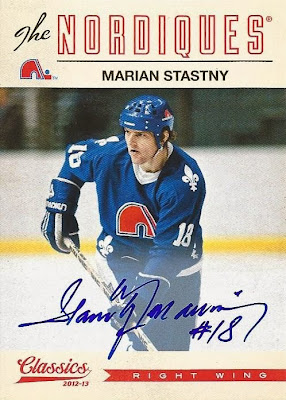 Next we've got Marian Stastny.  I sound like a broken record at this point, but the autographs are just beautiful on so many of these cards.  I love that Marian signed "Stastny, Marian #18".  You don't see the last name, first name format very often.  I already showed Anton's card a while back, so I've now got 2/3 of the Stastny brothers.  Unfortunately that's probably all I'll ever have, since Peter's card is a short print and the last one I saw listed went for $178 (no, I'm not kidding).  By contrast, Marian here came to $3.49... 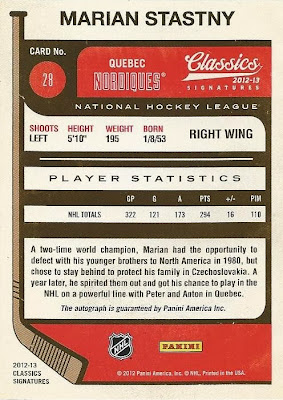 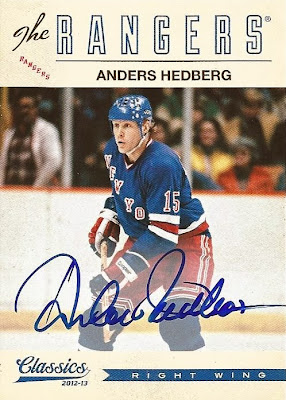 Anders Hedberg was an autograph I was excited to get from this set.  I would love one showing him from his days of dominating the WHA with the Winnipeg Jets, but this is a more than acceptable placeholder from Panini until that day comes.  Especially since it set me back all of $4.47 on COMC.  Anders absolutely owned the WHA alongside Bobby Hull, capturing two titles, and was one of the first European-born players to make a significant impact in North American hockey, period.  To get his John Hancock for under $5 almost felt like stealing. 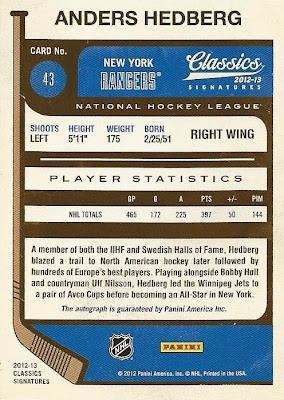 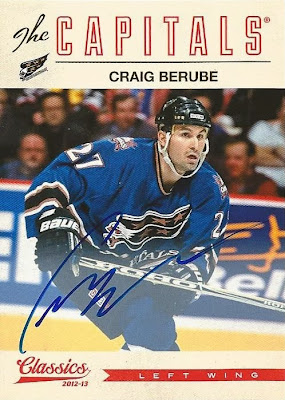 You know you have a good checklist when one of the weaker cards in the set represents 3,149 career penalty minutes and the current head coach of the Philadelphia Flyers.  Certainly not one of the better autographs either, sort of a weak scribble.  If you're a Flyers fan you better hope Craig tries a little harder at coaching hockey than he does at signing hockey cards.  I think I overpaid for this one at $5.41, but I was tired of waiting around for it. 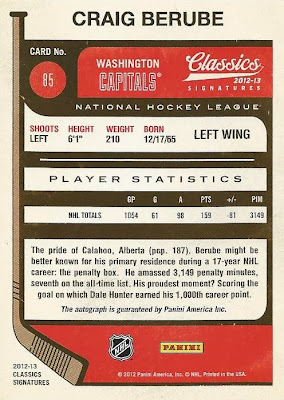 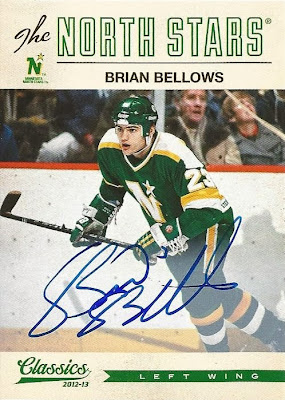 Brian Bellows was actually a fine player, who if anything suffered from being compared to Wayne Gretzky as a young prospect and (surprise) failing to live up to those lofty standards (along with every other human being to ever lace up a pair of skates).  In the end, he amassed over 1,000 points and close to 500 goals at the NHL level, and after coming tantalizingly close to winning it all with the North Stars, finally did just that with the Canadiens in 1993.  1,000 career points, $4.80 for an on-card auto, not too bad... 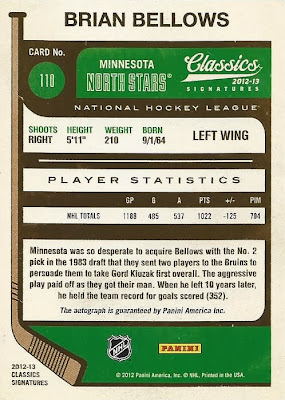 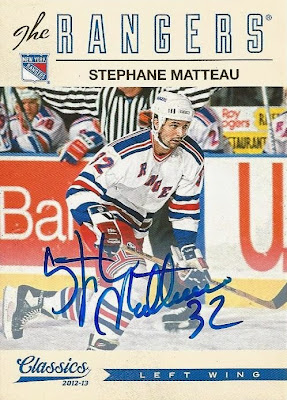 Everyone remembers the epic 1994 Cup finals when the Rangers finally ended their drought in 7 games against Vancouver.  Fewer remember the Eastern Conference Finals just before that, in which the Rangers squeaked by the Devils, also in 7 games.  Stephane Matteau is best remembered by Rangers fans for scoring two overtime goals in that series, including the ultimate series-decider in game 7.  Interesting guy to have an autograph of, for just $3.75. 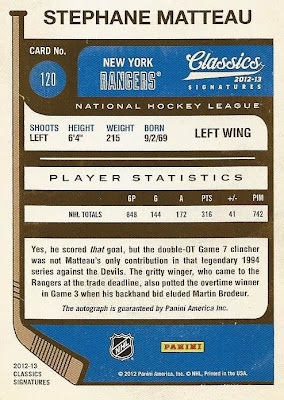 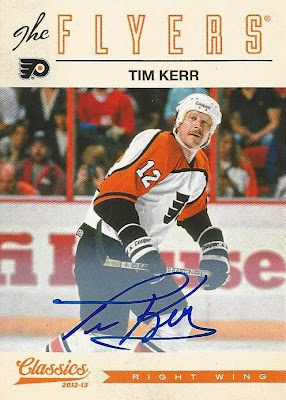 As a kid in the early '90s, all I remember about encountering a Tim Kerr card in a pack was snickering about his curly afro.  He was actually quite a sniper though, to the tune of back-to-back-to-back-to-back 50 goal seasons!  I don't think it's unreasonable to ask whether, had it not been for injuries, Kerr would have maybe had a shot at being a Hall-of-Famer.  $6.46 was what it took to add his autograph to my collection. 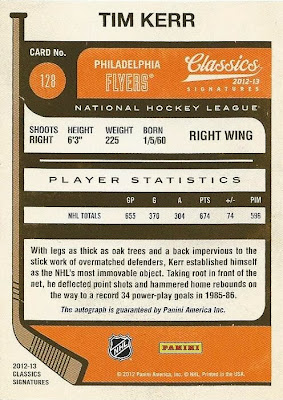 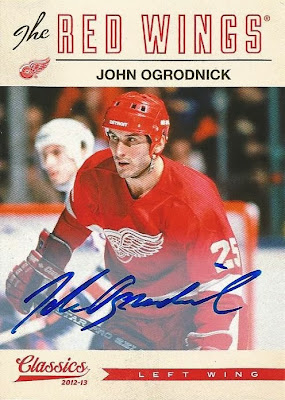 Ogrodnick was a long time NHL player, in fact he played long enough to accumulate over 400 career goals.  The highlight of his career was the the 1984-85 season in which he scored 55 goals and assisted on 50 others for 105 points (all career highs).  This card was the bargain of this lot unquestionably at $1.60... 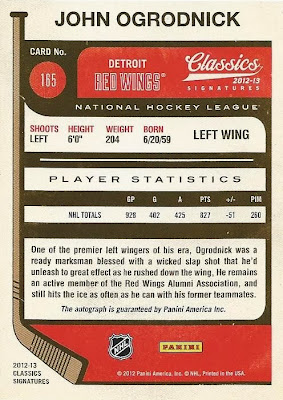 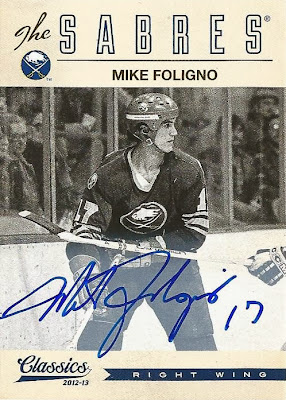 Mike Foligno was a gritty winger who carved out a long career at the NHL level.  He appears to have started a hockey dynasty as well, with two sons playing in the league today.  Mike's nice bold auto complete with uniform #17, set me back $5.50. 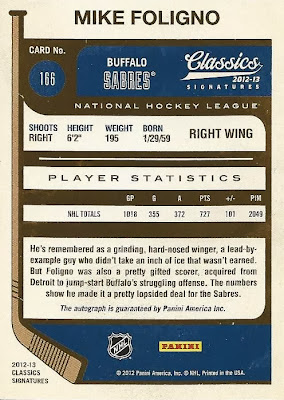 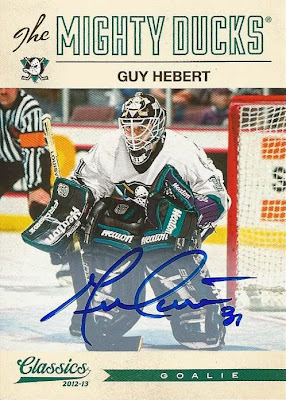 Finally, the most expensive card of the lot (at just $7) believe it or not, Guy Hebert.  Guy was a Mighty Duck for longer than any other player from the original expansion team, and is still near the top of every major statistical category in goaltending for the franchise.  His autograph is not a short print, but for whatever reason doesn't seem to show up as frequently as many of the other autographs, hence the slightly inflated price. 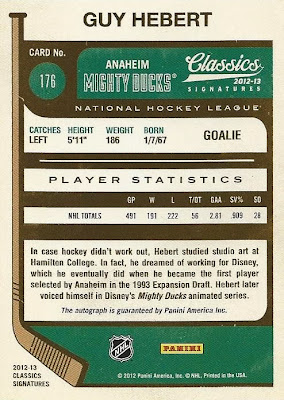 10 great on-card autographs, and in case you weren't tallying that's a total of $47.99.  At $4.79 on average you can't go wrong in my opinion.  These bring my total to 75 autographs and counting, a nice tidy number to round out 2013.  I've got plenty more great autographs, both from this set and others, that I'll be featuring in the new year!
Posted by shoeboxlegends at 4:16 PM

I've really enjoyed this set each time you post it. How big is it? I need to pick up a few.

Great stuff. I remember a couple few years ago the Hawks bringing back Secord as part of their honoring players of the past and he did talk about being a pilot. Some nice signatures there and you're definitely right about the prices. I may have said this before but hockey autos are a relative bargain compared to baseball.

Thanks guys! 1967ers, there are just shy of 150 base set autographs available as best I can tell. However 14 of those are short prints and another 22 are super short prints, those 36 cards go for unreal prices. The other 100+ though can be had for a real steal, great little set...