Another day, another card towards my lifelong goal of completing the 1953 Topps baseball set. Today we look at card #110 on the checklist, Herman Wehmeier of the Cincinnati Reds.  This card actually reflects an interesting story from the United States' past... 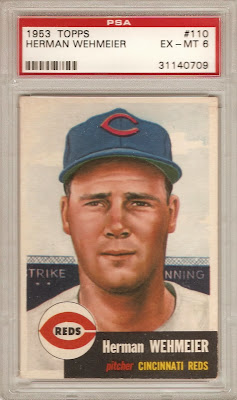 If you've never heard of Herm here, you could certainly be forgiven.  He appeared in 13 different seasons (between 1945 and 1958, did not play in 1946), but really turned in a pretty underwhelming career stat line overall.  His first 8 1/2 seasons were played with the Cincinnati Reds.  In 361 total appearances, Wehmeier pitched to a career 92-108 record with a 4.80 ERA.  Herman frequently lead the league in categories you don't generally want to lead in as a pitcher, like walks, hit batsmen, earned runs allowed, wild pitches, etc.  He'd spend the final few seasons bouncing around with four other teams before calling it a career.

As a fan of world history, what I love about this card are the ties between baseball and what was occurring in American society at the time.  1953 was right smack in the middle of the Second Red Scare, the McCarthy era, and the paranoia related to communism was at a peak here in the States.  So much so that even the word "Red" was a potential indicator, and a good way to draw unwanted attention to yourself.  During this period the Cincinnati Reds, quite obviously aware of this, took a variety of steps to disassociate themselves from the word (and the color).

You can see on Wehmeier's '53 Topps card that there seems to be a lot of blue in the Reds uniform, but at least here they still use the word Reds within the team's red "C" logo, and still refer to the team as the Reds.  Like I said, these changes kind of came in stages relative to the panic level of the general public.  Here's a look at another '50s Reds card from my collection, from just two years later: 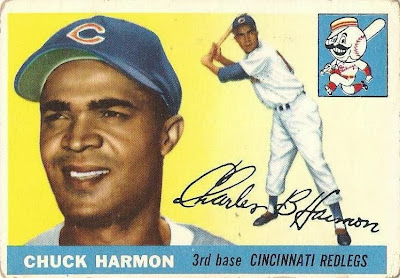 Whole lotta blue right there, even the sleeves and the stirrups.  The logo, while totally awesome, no longer features the word Reds and the team is now being referred to as the Redlegs, even though Chuck's legs are blue.  I'm fascinated by this as an example of society influencing sport, in fact I think I'm going to pick up some more '50s Reds cards and do a post on just this topic sometime. 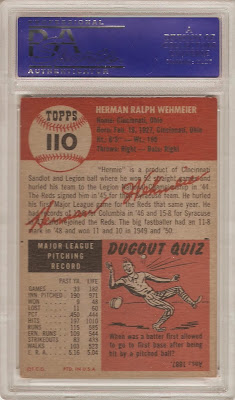 Oh yeah, a couple more interesting things.  Herman was absolutely owned by the St. Louis Cardinals (as in 0-14!) before being traded to them later in his career.  Not only that, he also died on the witness stand while testifying at a federal theft trial at age 46!  There's an interesting read on it, much better than I could ever type up, here.  Herm Wehmeier's 1953 Topps card is just another example proving that even a lowly common can make for a very interesting piece of cardboard.

Your 53' set is coming along nicely! I love following this series as I love cards from that iconic year!