Caramel - The Alternative to Tobacco

When most collectors think of really, really old baseball cards they think of the ones packaged with tobacco.  Indeed many of the all-time classics hail from tobacco sets, T206 chief among them.  I managed to land my very first T206 a couple of months ago, and I do think they're fascinating cards.  I'm equally intrigued however, by one of the other major players in cards from this era, caramel companies!

They might not be as flashy, or as well known as their tobacco counterparts, but there were definitely some very interesting baseball cards pulled out of boxes of candy treats in the early part of the 20th century.  I've managed to land a few of them as part of the pre-war baseball card kick I've been on in recent months, and finally had some time to share the first today: 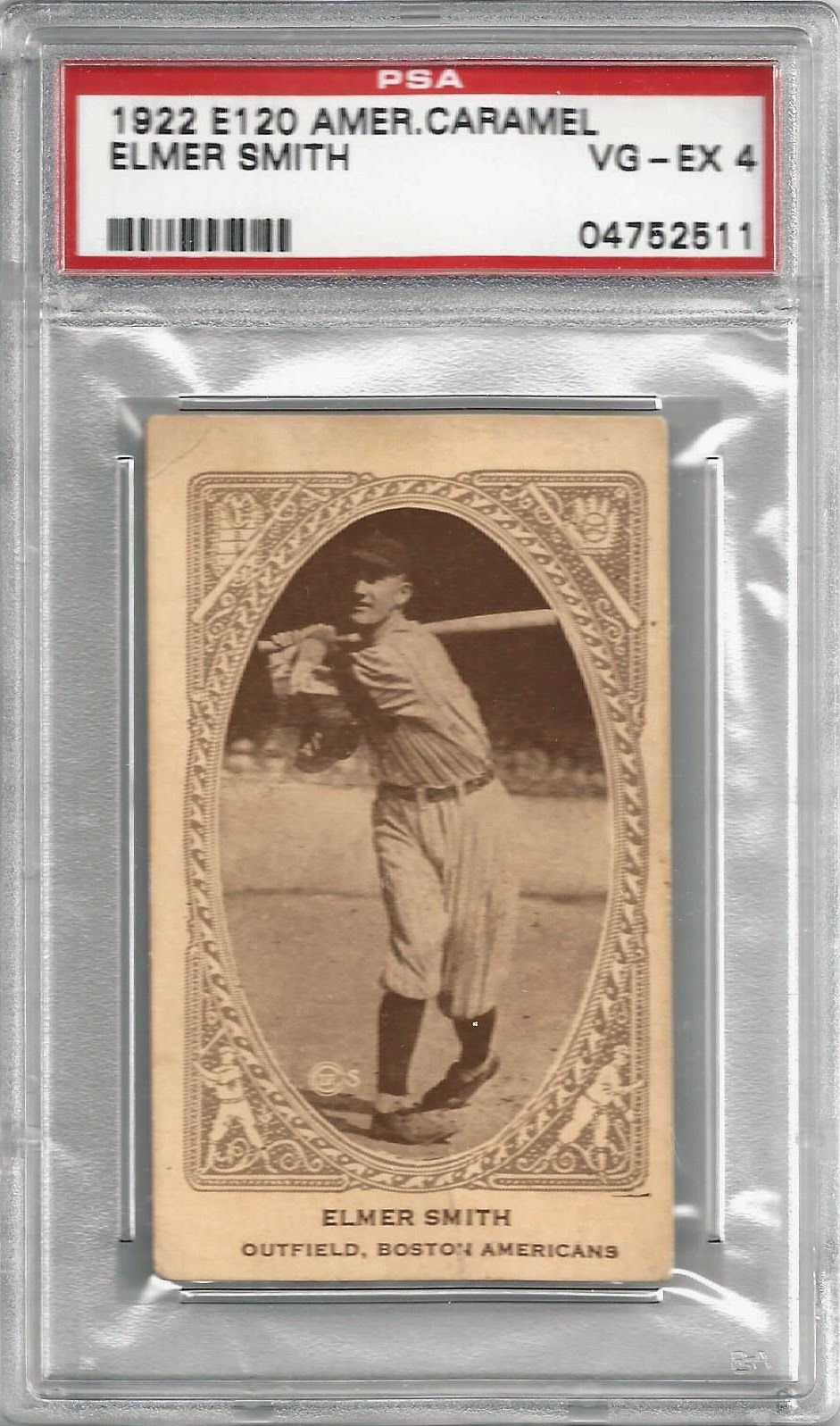 Pretty cool, huh?  American Caramel formed in the late 1800s when some competitors bought up Hershey's caramel operation.  All of their baseball card releases though (save maybe one?) came in the 20th century.  As the PSA slab indicates, this one hails from their 1922 release, later classified as E120 by collectors.  There are 240 total cards in this set.  The cards feature black and white photos (more on that in a minute) inside a very ornate illustrated frame.  At the bottom you've got player name, position, city and league!

I obviously know very little about the card's subject, Elmer Smith, who was born in 1892 and passed away when I was just one year old.  It's funny that he ended up as one of the 15 Red Sox on the checklist though, because 1922 was actually the only season he'd play for Boston in his MLB career.  Interesting bit of bar room trivia, he was the first player ever to hit a grand slam in the World Series!  That was back in 1920 with the Cleveland Indians, who won it all that season.

Now, back to the card itself... 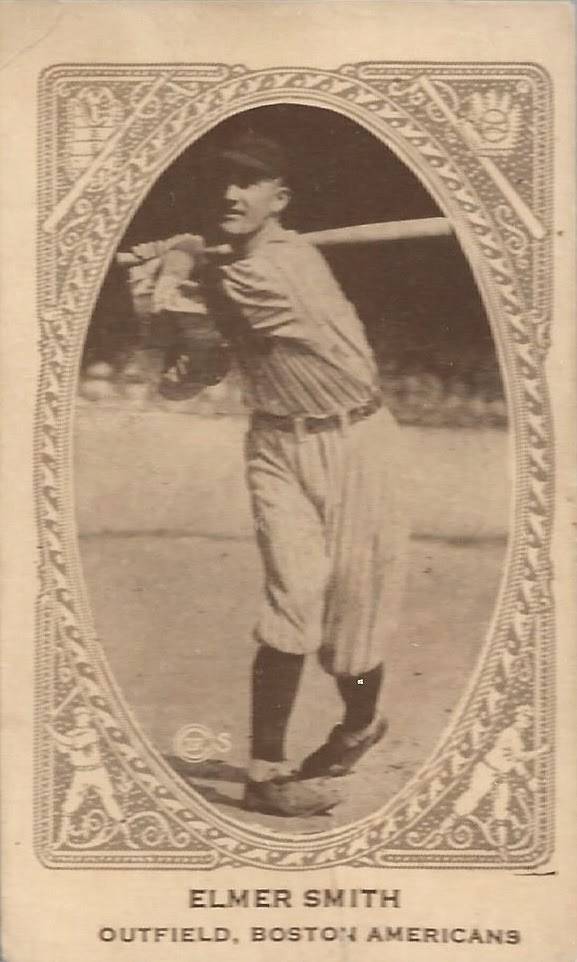 Here's a better look.  I really love the design.  The frame around the photograph features a bat and catcher's gear in upper left, bat and glove upper right, and some ballplayers along the bottom.  The thing I like best about these though is the use of actual photos.  So many of the cards from this era feature paintings, and while those are interesting in their own rite, there's just something that I love about seeing an actual photograph taken on a baseball diamond nearly 100 years ago now.  Same reason I always liked the Conlon baseball cards from the early '90s I guess.

As far as this photo goes, look at those feet!  Is that really a proper batting stance Elmer? 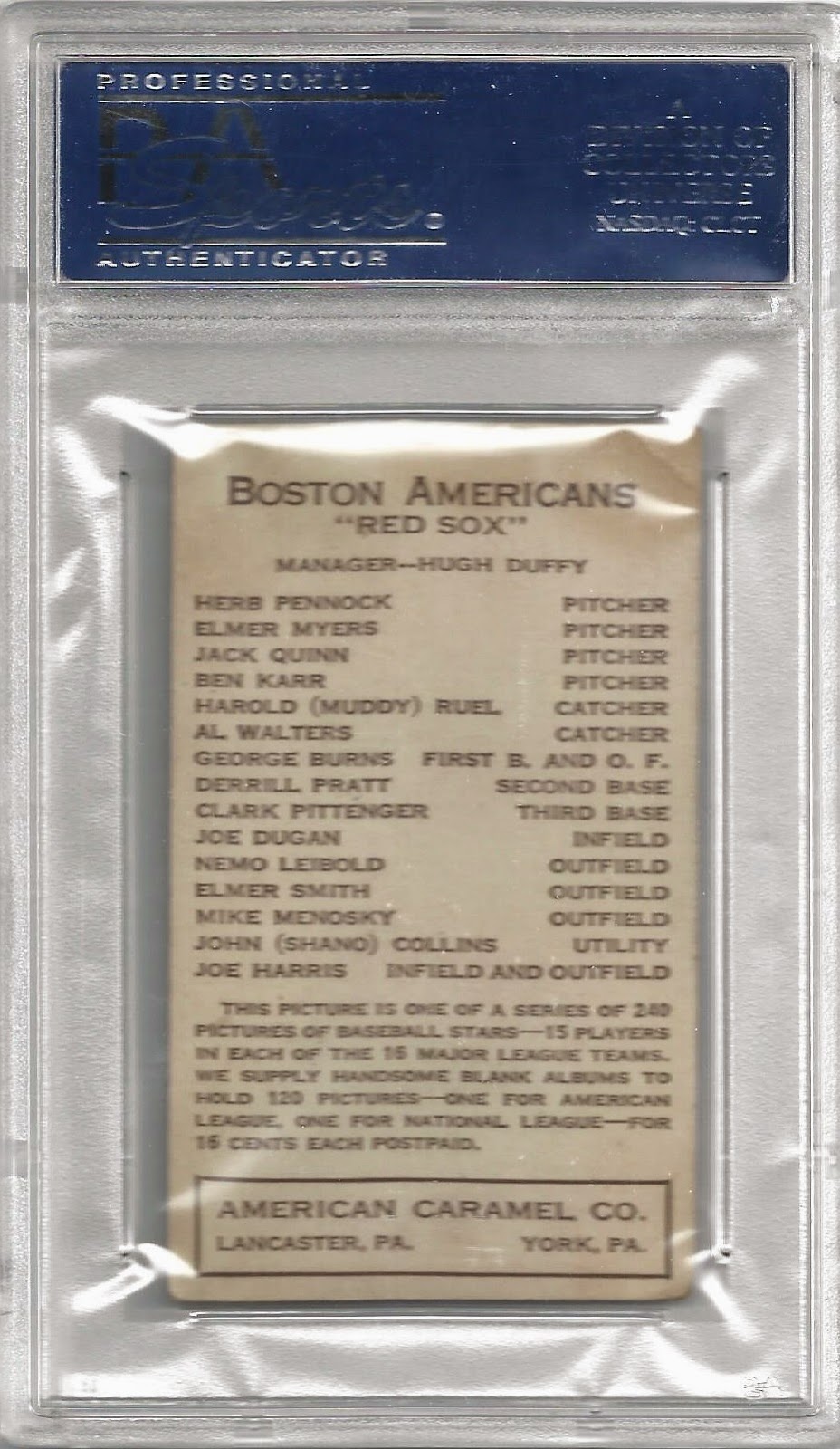 Here's a look at the back.  Many of the tobacco cards I've seen, including the T206's, are just a giant advertisement on the back.  In this case we do have a very small ad along the bottom to let you know that this was printed and distributed by American Caramel Co., however the majority of the back is saved for a team checklist.  If you ask me, this is a very solid card back for 1922!

I'm not delusional enough to think that I'll ever gather all 15 Red Sox from this set.  They seem to be fairly rare; according to PSA they've only graded three other examples a VG-EX 4 like my copy, and only one single card higher than that.  I would like to at least grab a couple more Sox from this set though if I happen to encounter them, and my budget allows.

What's your take on caramel cards?  Inferior to tobacco?  Superior?  Do you have any caramel cards of your own?  If so, and you've posted about them, it would be great if you'd leave a link in the comments so I can check it out...
Posted by shoeboxlegends at 10:41 AM

I actually don't think I've ever seen a caramel card in person. Awesome pickup! The photo does remind me a lot of the Conlon brand.

That's very cool. I do think I've seen them online but never in person.

Can't imagine why a candy card would be inferior to any other card. Everything from the 40s onward was candy-based and was there not a 30s "Gum Wars" in baseball as there was in hockey?

I picked up my first caramel card earlier this year. You can read about it here.

I bought a few a few weeks ago. I also bid on a few and didn't win. Sorry if I ran the bidding up for you...

Don't own any. Just as good as tobacco to me too.

Thanks guys! Mark I really like your card from the set as well.