Thank You Gavin (and Coco Crisp!)

A while back I participated in a contest held by Gavin over at Baseball Card Breakdown.  To enter, you simply had to leave a comment, which it turns out around 50 people did.  Those 50 people each got a random number 1-50 assigned (I was 19).  The winner would be the person with the number that matched the total amount of hits in the July 22nd A's/Rays game.

Shocker, I didn't win.  There were 17 total hits in the game.  Luckily Gavin announced a runner-up prize for the person whose number matched the total number of hits, runs and errors in the game.  Thanks to Coco Crisp driving in the winning (and only) run in the bottom of the 13th, the runner-up prize winner was yours truly! 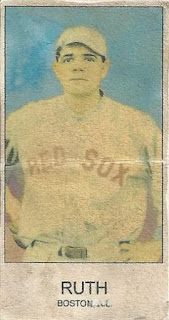 Considering this was only a runner-up prize, I wasn't expecting much, but Gavin's generosity was truly jaw-dropping.  The bulk of my prize consisted of some of his amazing custom cardboard, starting with this great Babe Ruth.  I've had a few folks send me customs over the lifetime of this blog, and I have to say that Gavin's are probably the most authentic in look and feel. 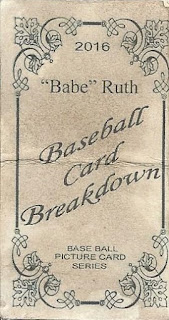 Hell, even his card backs are well done, which I really appreciate.  The paper/card stock he uses has a real baseball card feel to it as well, and I love the extra touch of giving this Ruth card some wear.  I've got a few authentic tobacco cards in my collection and this one truly captures the look and feel of the originals.  We're just getting started though... 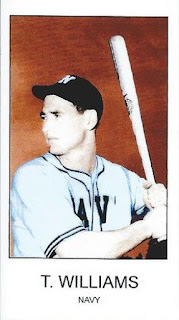 There was another custom mini in the package as well, this one paying tribute to Ted Williams' time with the Navy.  Without looking, I'm guessing this one was based loosely off the Obak sets from a few years ago. 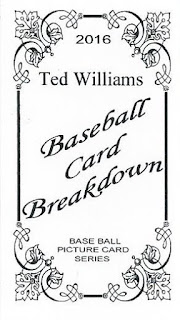 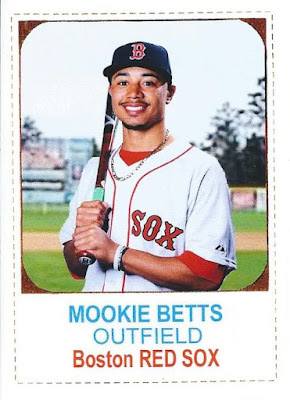 Now we're getting to the real gems of the package, with this awesome Hostess custom of the best player on the Sox in 2016.  Betts' numbers are getting to the point where you'd almost have to consider him a dark horse for AL MVP, no?  Guessing Jose Altuve will win it barring some kind of major slump here, but Mookie is right up there in my book!  It's very tempting to take a pair of scissors to the dotted line on this one, but so far I've refrained. 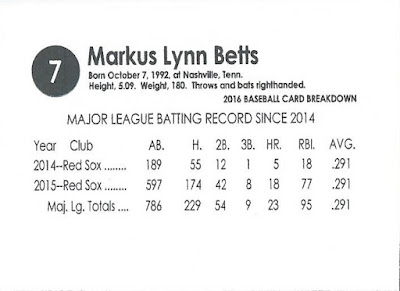 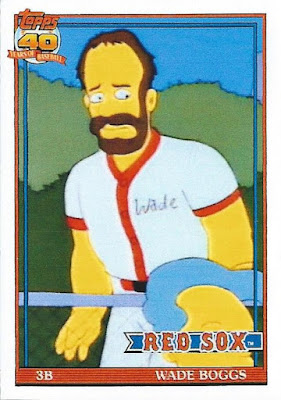 A couple of years ago now (has it really been that long?) Gavin created a pair of custom Wade Boggs cards to commemorate his appearance on The Simpsons.  He was kind enough to include a copy of both cards here!  The first is done up on the 1991 Topps design. 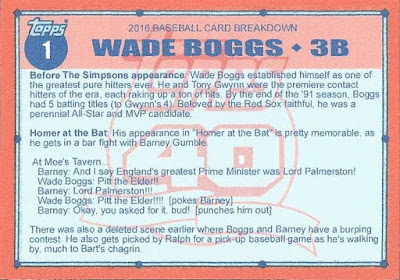 I really love the attention to detail on the card back here.  Pretty impressive when you can make a custom card where the back is equally impressive as, if not more impressive than, the front! 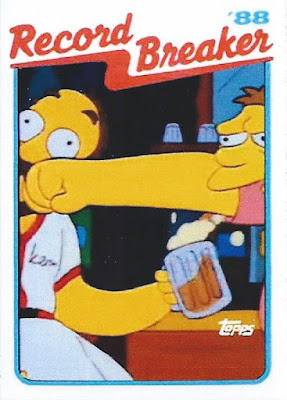 The other Boggs Simpsons custom is done in 1989 Topps Record Breaker format.  Great shot here of Barney punching out Boggs. 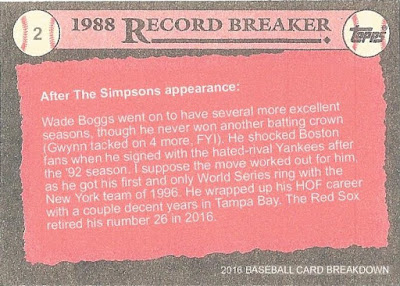 Again, we have a proper card back as well.  These are two of the more unique custom cards I've ever received, it sure was thoughtful (and appreciated!) of Gavin to include these.  From here though the package gets even better! 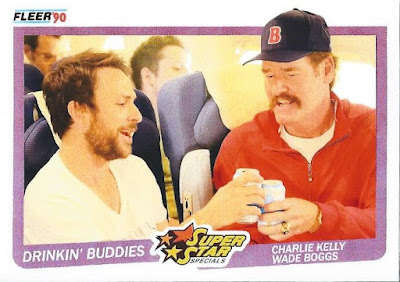 I know the show is considered obnoxious by some, but I've been a fan of It's Always Sunny since the very beginning.  Gavin did a great job with this custom, from the episode where the gang tries to break Boggs' "cans of beer on a cross-country flight" record.  Wade actually autographed and returned three of these to Gavin.  I threw my name in the ring to try to win an autographed copy at the time, but wasn't fortunate enough to win.  This might be my single favorite custom card of all-time, so happy to have one of my own! 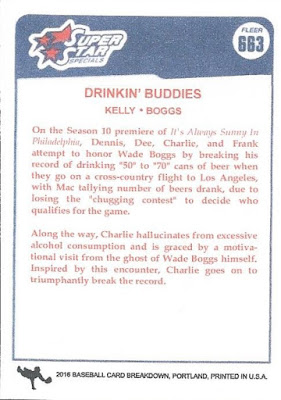 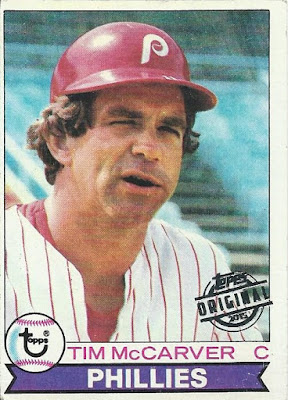 The prize package I received wasn't entirely composed of Baseball Card Breakdown customs, there were a couple of actual Topps cards in the package as well.  This Tim McCarver was a great addition to the package, as it makes my buyback franken-set at slot #675!  I'm sure Tim doesn't find this to be the most flattering photo of himself, but I'll take it. 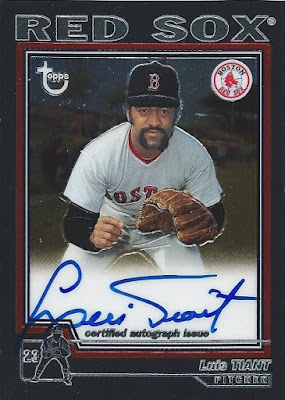 Man!  How's that for a second place prize?!?!  This shiny beaut' is my second certified autograph of Luis Tiant, and easily my favorite.  It's been a couple of weeks since I received this package and I'm still just amazed at the generosity here. 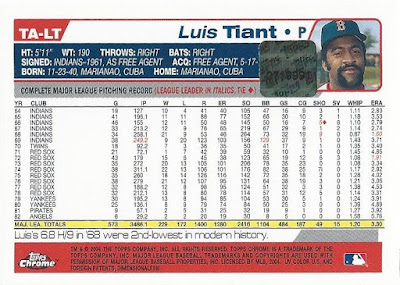 A hard-signed Tiant would normally be the star of the show for just about any trade package, but Gavin included one more card that topped even this one... 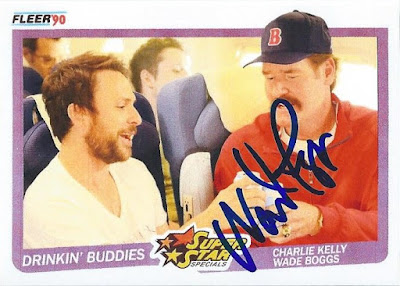 Holy crap!  It's one of the three versions of the It's Always Sunny custom that Boggs actually signed himself!  This is the best Wade Boggs auto in my collection by a long shot.  The fact that a fellow blogger/collector made a custom that merges one of my favorite franchise's best players with one of my favorite modern TV shows, printed it and mailed it to said player, got it returned with an autograph, and then sent it to little ol' me is just beyond cool! 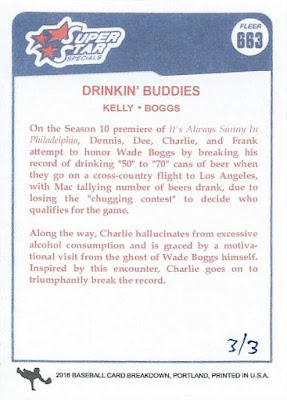 Here's the back, as you can see I received signed copy 3 of 3.

Gavin, I can't thank you enough for all of these cards, if this was the second place package I can't imagine what the winner got!  You are truly a custom card genius, and I look forward to following along on Baseball Card Breakdown to see what you come up with next!

Glad you like! That was a fun package to put together, so I'm happy it was a hit with ya.

That's a phenomenal "consolation prize"! Heck, I was already going "Wow" by the time I got to the Mookie Betts Hostess custom.

Great cards from Gavin. His customs really are great