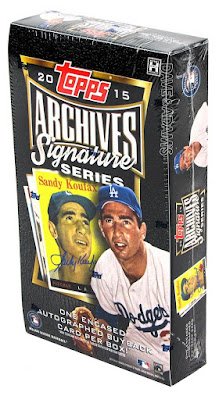 Last year Topps rolled out an interesting product in Archives Signature Series.  Definitely a gamble of a product, as you receive one hard-signed, encased, and serial-numbered card per box.  Despite my love of autographed cards, rolling the dice like this isn't exactly my cup of tea.  As with almost any product though, you can find some great deals on the secondary market if you're patient (and lucky!) enough, and that is definitely the case with today's card: 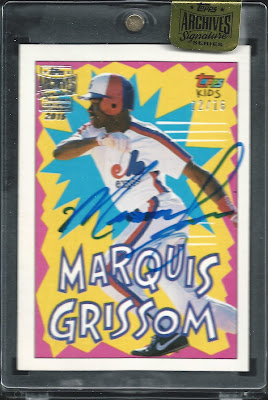 I fell in love with this one the moment I laid eyes on it, primarily because the Topps Kids release is one of the more memorable sets from my childhood.  I used to love opening packs of this stuff as a kid, and I had no idea that some of these were included in the Archives Signatures release.

Now, I know Marquis isn't the most collected guy out there, but I figured this card was unique enough that it would draw a healthy amount of bids, especially with just 16 copies out there (it's a little hard to see but this one is numbered 12/16 under the Topps Kids logo in the upper right).  Thankfully I was wrong, and I ended up taking this one home with a winning bid of a paltry $3.24. 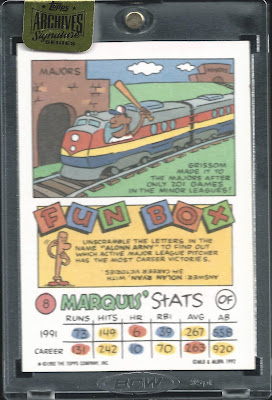 I won't exactly be able to sell this one off some day to aid in my retirement, but that's not why I'm in the hobby.  For less than $5 this is one of my favorite autograph pick-ups of 2016 so far, and it still brings a smile to my face every time I look at it.

Were you into the Topps Kids release in the early '90s?  How about Archives Signatures?  Anyone busted any of this yet?  If so, how did you do?
Posted by shoeboxlegends at 7:27 AM

Awesome pick up. This has to be one of the highest risk products out there. Can't imagine how that guy felt selling this card for less than $5... after spending $50 on the box.

I was in my mid-20's when those Topps Kids sets came out, so they never really appealed to me. Still, you've gotta love an on-card Marquis Grissom sign for under $4.

Don't have any Archives Signatures, but I'd be more likely to try to scoop up someone like Jeff Conine on the cheap than buy a box.

Fun card for the price. I love on card autos.

I was able to snag an unopened 2016 box of this at a deep discount, but I still "lost" a big chunk of money on the deal - I pulled an 86 Topps John Franco (Reds). It's a fun card, though, so I was not disappointed at all. If I were trying to make $$ buying it, I probably would have been sad.