Like many baseball card collectors, I've been a fan of the Topps Archives Signature Series autograph release that we've seen for a couple of years running now.  While the gamble on a one-card unopened box isn't my thing, I have encountered quite a few singles on the secondary market that have captured my interest.  Today's autograph is the latest example of one such card: 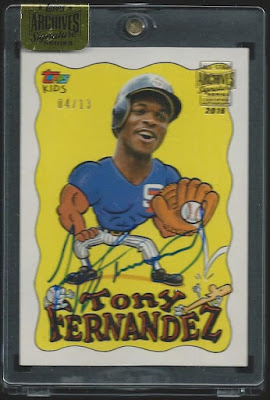 While they aren't all that easy to find for some reason, the Topps Kids cards might be my favorite autos of any that are included in the Archives Signatures sets.  I'm sure it helps that I was right in the targeted demographic (9 years old) when this set was originally printed up, but I've always enjoyed these and I love the fact that I've now been able to grab a couple that are autographed.

Tony Fernandez here is the second one I've landed, joining Marquis Grissom.  I prefer this one to the Grissom card though, as it uses the technique of blending a photograph of the player's head with a cartoon body.  These partial caricatures were always my favorite Topps Kids cards during my first go-round at collecting.

I know these autographs in particular are really a niche thing, and don't hold much value, but that's not why I collect cards to begin with.  It made my day when I was fortunate enough to win one of the 13 copies of this card that Tony Fernandez held in hand and autographed for less than $8.  A prime example of how you don't have to spend a lot of money in our hobby to have a lot of fun. 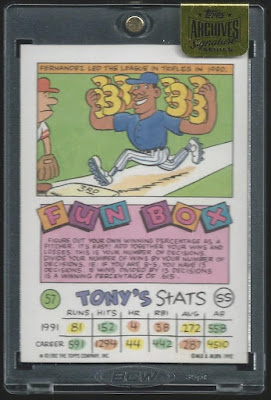 Oh yeah, the backs were pretty great too!

Like I said, I haven't seen too many of these.  In fact I'm not aware of any others for sale on COMC or eBay, at least not where the seller isn't asking an outrageous price.  If I never acquire another though I'm more than happy with the nostalgic value that the pair I do own provides.

Were you collecting in 1992, and if so do you remember what you thought of the Topps Kids set?
Posted by shoeboxlegends at 11:30 AM

I remember ripping a pack of these when I was a kid and instantly fell in love with them. As an adult, I can truly appreciate how they are somewhat of an homage to the old Goudey caricatures. It's nice to see such a niche set like Kids pop up in the Archives series.

I know some kids who were collecting in 1992 and their dad tried to convince them Topps Kids cards were cool, which they were. Cheap too.

I was in my mid-to-late twenties at the time, and I'll be frank; I've never liked Topps Kids. I think a big part of it is that I like my photos and I like my cartoons, but I really don't like when they're combined. I've also never cared for those Goudey Heads Up that Tony Burbs referred to.

Nice card. Back in the day, I didn't like this product. However... the older I get, the more I appreciate them. I just can't believe that this is the third Fernandez I've seen from this product where he's with the Padres. It's a good thing I'm not a completist.

I wasn't collecting but I do like them. For me cards should be fun.

Nice card! I've been tempted to land a similar (Padres) card of him, and maybe even threw down a low bid or two in vain, but haven't sealed the deal.

I'm really hoping Fred McGriff is included in this product one of these years, as I've long had a hankering for a Padres certified auto from him, though his post-career cards all seem to feature him reping the Braves or Blue Jays. So a buyback auto is likely my best hope.

As for Topps Kids, I was collecting in '92, but a bit too old for them to register with me at all. Now I like them ok, though don't have many in my collection.