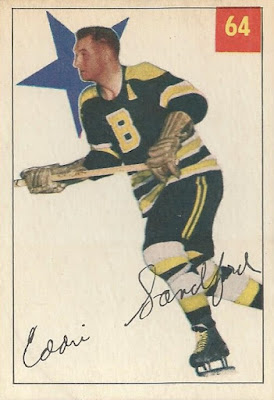 Why?:  It's been a "frugal" start to 2018 for me collecting-wise, which is fine.  I've picked up about 60 total cards over the first two and a half weeks of the year, but most of those were cheap (50 cents or less) needs for a vintage set that I'll be posting about when they arrive.  At six bucks, Ed Sandford here is one of the more expensive cards I've picked up in the new year.  It just arrived in my  mailbox today, and makes for an easy post on a night when I'm short on both energy and time.

This is my fourth card from the '54-55 Parkhurst set, but my first from the All-Star subset (the others feature game action photos).  The '54-55 season was the best of Eddie Sanford's career, he finished in the top 10 in scoring, was named a Second Team All-Star, and captained Boston (though he's wearing only the 'A' in this photo). 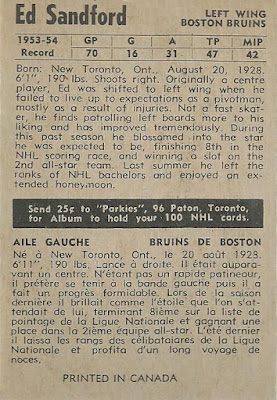 I really like just about all of the vintage Parkhurst sets, but this one in particular is a favorite.  Since my overall goal for 2018 is to really increase the vintage section of my collection more than anything else, I figured it would be great to knock one of these off early.

The card is in great shape, the price was right, and I certainly have no regrets about adding this one!  Hopefully I stick to my guns and will have plenty of other great vintage like this to show off as the year rolls on.  Thanks for checking in!
Posted by shoeboxlegends at 9:07 PM

Beautiful card! I've been off to a frugal start myself, and will be for the rest of the year. I have a wedding to pay for!

Marc, great to hear from you! Kin, I know that all too well, went through it almost 7 years ago now and in some sense still feels like it was only yesterday! Good luck with the planning, it can be quite an undertaking.