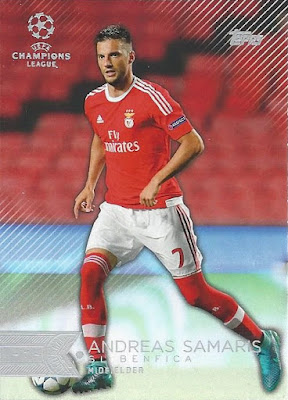 The first two cards were throw-ins that came packaged along with the third card, an eBay purchase.  This is my first card of mid-fielder Andreas Samaris, and also my first card from the 2016 Topps UEFA Champions League Showcase set.  Not a bad looking design at all I have to say. I also received this Hyper Prizm parallel from the 2018 Panini Prizm World Cup set that I've been rabidly collecting.  This one is much appreciated given that I may try to attempt a parallel franken-set of this 300-card release. 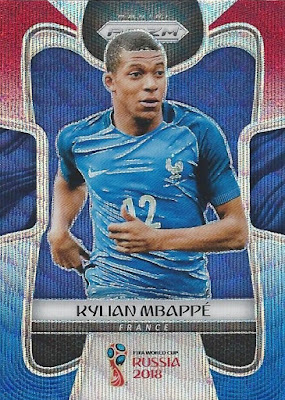 Here's the card that the first two came packaged along with.  Kylian Mbappe has been continuing his captivating play post-World Cup with Paris St Germain of France's Ligue 1.  In just two games with the team so far this season, he's already found the back of the net three times, despite the fact that in one of those two games he wasn't even subbed in until halftime!

Still just 19 years old, Kylian has already established himself as one of the best players on the planet.  This is my fourth card of his, and I think it might be my favorite so far as the Red & Blue Wave parallel matches France's country colors so well.  This one also pairs nicely with the Green & Orange Wave parallel that I posted on the day France won the World Cup.

Well, that's all for now, thanks for stopping by!
Posted by shoeboxlegends at 9:37 PM

He's an amazing talent and so much fun to watch. Too bad PSG matches are few and far between on TV where I am.