If I were to make a formal list of things that draw me to sports card collecting in general or to picking up a particular card, there are a few obvious characteristics that would be near the top.  Vintage, buybacks, and of course shiny!

I was at an impressionable age when the first refractors and other truly shiny cards first burst onto the scene in the early '90s, and I've loved them ever since.  I'll be sharing some of my favorites old and new on the blog going forward under the aptly-named series of posts called "Shiny Cardboard".

Today's card is actually brand new to my collection even though it's over 20 years old now.  Just arrived in my mailbox this past week.  Check it out! 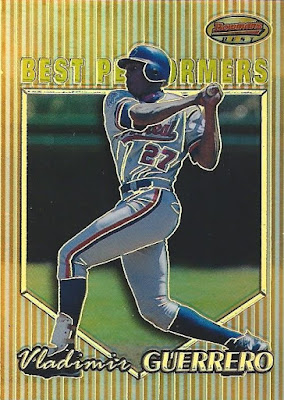 This beauty is a 1999 Bowman's Best Refractor.  I was not collecting cards in 1999, so I only learned about this release recently from a former card blogger that converted over to the YouTube platform.  The checklist is 200 cards deep, with the first 100 featuring established stars of the game, and the second 100 featuring rookies and promising youngsters.

This particular card is from the "Best Performers" subset that falls toward the end of the veterans and stars portion of the checklist, and features the player superimposed over a home base shape.  The standard cards have a diamond shape behind the subject.   I hope to show one of those off in a future post.

What an absolute stunner in terms of shininess level.  What I learned in the YouTube video about these refractors that makes them especially cool is the etching.  Look how Topps applied etching to the wrinkles in Vlad's uniform, and the lines on his belt and his helmet.  Even his batting shinguard has a little etching action going on!  Apparently Topps only really practiced this etching in a very limited number of sets for a year or two before giving up the practice entirely.  It's a shame, because wow does it make a huge difference in the visual appeal of the card.  It's pretty amazing to see how far things advanced in the hobby in the decade between 1989 Topps and this blinding sight! 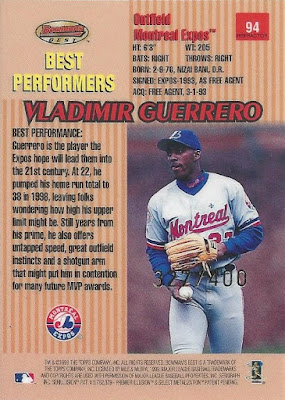 It's a little hard to make out near Guerrero's mid-section, but these standard Refractors are serial-numbered to /400.  There is also an Atomic Refractor parallel numbered to just /100, which I've yet to see in hand.  I can't imagine it looks any nicer than this amazing card though! 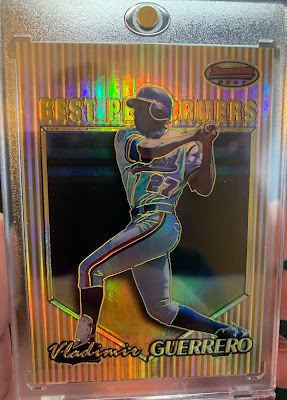 Here's a look at it in its new home, a brand-spanking-new Ultra Pro One Touch holder.  Look at that guy glow!  It's almost hypnotic.  If you had to guess what I paid for this card on eBay what would you say?  $20?  $10, maybe?  How about $3.99 with free shipping!  I couldn't click Buy-It-Now fast enough.

So there you  have it, my new favorite Vladimir Guerrero card.  Thanks to Eric for teaching me about the set and these fantastic Refractors, and thanks to you for stopping by to read my ramblings about baseball cards.

Until next time, stay safe and be kind!
Posted by shoeboxlegends at 4:15 PM

There's just something special about 90's refractors. When I returned to the hobby in 2008, they had sort of lost their "luster" with a lot of collectors... so I started grabbing them up. It's good to see collectors embrace them again.