In honor of Milt Schmidt's 94th birthday, here's the most recent addition to my steadily growing Schmidt collection: 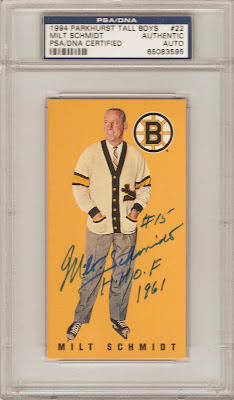 Nice looking card huh? This is my third Milt Schmidt auto, but unlike my first two, this time Milt signed his #15 as well as his Hockey Hall-of-Fame induction year! This one's also different in that it's my first autographed card where Milt is featured as a coach rather than a player. I'd have to say this is my favorite of the three.

I've always been fond of the 1994-95 Parkhurst tall boy cards, and I love this shot of Milt in his coach's garb and skates. I had this card on my watch list on eBay for months, but the seller's asking price was just too high. Finally, after I wore him down with a few offers over time, he cracked and I added this to my collection for around $20. Here's a better look at the front: 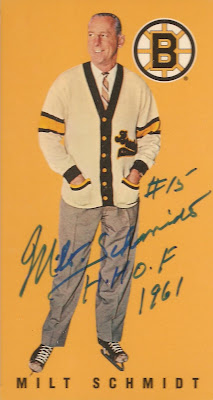 The autograph is placed really well and Milt certainly filled up plenty of the card with nice large print. On a side note, if I could find one of those Bruins sweaters today I'd buy it in a heartbeat. 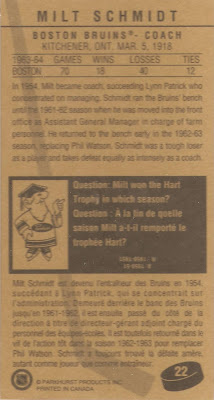 I've picked up one other Schmidt card recently, which I hope to show here soon...

94 years old. That's amazing. Very cool to have it signed directly on the card.

I remember when these came out. It was the year after the "missing link" set for '56-67 and was supposed to represent what they'd have made had they not quit after '63-64. I bought half a dozen packs, but never finished it.