With the 2015 Major League Baseball season officially underway later today, it seemed like an appropriate time for today's card.  The Red Sox actually kick off their season in Philadelphia tomorrow, and one of the players fans will be most excited to watch is Mookie Betts: 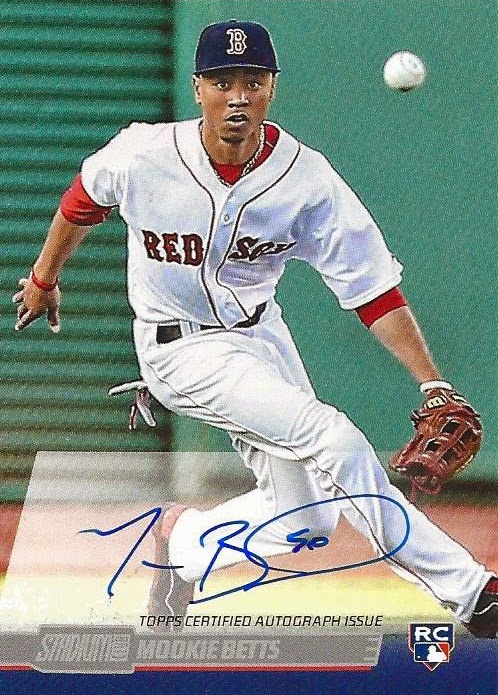 I would have to say this particular card was one of my best autograph acquisitions of this past baseball off-season.  I think I timed things just right picking this up in February, when there was a few feet of snow covering everything and baseball was the farthest thing from anyone's mind here in New England.  This is supported by the fact that I landed the card for $12.99, where it's now regularly selling in the $25 - $30 range.

After an impressive 50 games or so with Boston last season, Mookie tore the cover off the ball during Spring Training.  As a result, he's been named lead-off hitter and starting center fielder to begin the season.  Earning his spot on the roster was no small feat, as the Red Sox were crowded in the outfield and even optioned a man making $70 Million plus to AAA (Rusney Castillo).  The ceiling is certainly very high for Betts, and I'm dying to see how he can perform if he stays on the big league roster, and remains healthy, for an entire season. 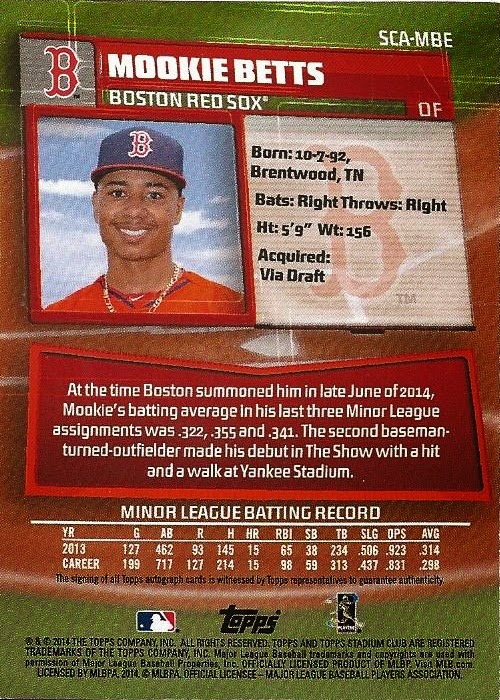 I'm relieved that baseball is finally here, especially after making it through one of the worst two month stretches of winter I've ever seen.  It's also nice to know that if Mookie Betts lives up to the lofty expectations he's been saddled with I won't have to go out and over-pay to add his autograph to my collection.

I hope you enjoy the season, best of luck to whatever team you follow (unless they happen to be in the AL East in which case I hope they finish no higher than second)!
Posted by shoeboxlegends at 7:39 AM

Nice card. I wish I had gone for that when it was not selling for as much.