It's been some time since I wrote a Signature Sundays post here on the blog, but I've got a real nice autograph to feature today.  It's the latest in my quest to collect as many of the 1992-93 Fleer Ultra buybacks from the 2016-17 Fleer Showcase set as possible, and it features one of the most successful players in NHL history, Mark Messier! 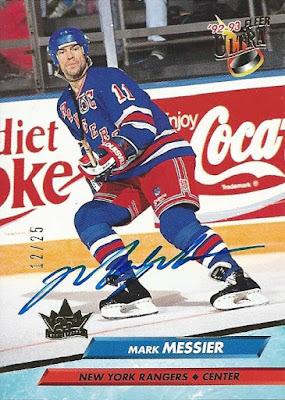 Mark seems to be one of the more polarizing figures in the history of the league, you run into people who love the guy and people who can't stand him pretty regularly.  To me, it's hard not to admire his career accolades.  I mean, he played a quarter of a century in the league, and along the way won six Stanley Cups, and captained two different franchises to a Cup.  Messier was a 15-time All-Star and won Hart, Conn Smythe and Lester B Pearson awards during his storied career.  In the end, Mark ended up third on the NHL's career points list, behind only Wayne Gretzky and Jaromir Jagr.

I'm really glad to add this Rangers autograph to my collection in particular, as I went on a trip to New York City with my dad in the summer of 1994 to see the Red Sox and Yankees play at the old Yankee Stadium.  The Rangers had just won The Cup and the city was rabid for the team and its captain, Messier.  I still remember going on a tour of Madison Square Garden that trip, and purchasing a Stanley Cup Champion souvenir puck.  I'll always think back to that when I look at this card.  Good memories. 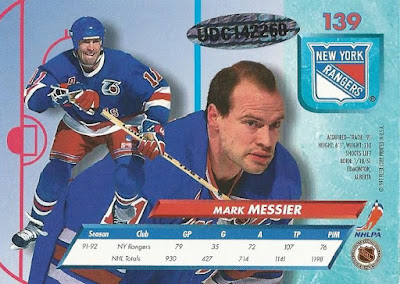 You can't post a '92-93 Ultra card without showing one of the greatest card back designs of all-time. 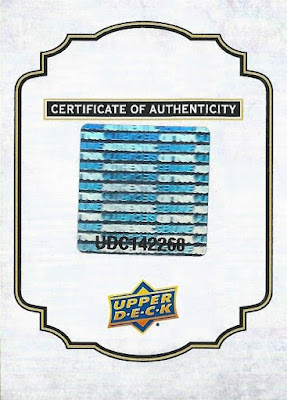 Here's the COA that correlates to the holographic sticker on the back, ensuring the autograph's legitimacy.

So yeah, a very solid addition to my collection today.  As an admitted buyback lover, these Ultra buybacks from Showcase are some of my favorite cards to be released the past couple of years, period.  I have so much fun tracking these down, I feel like a 10-year-old in '92 all over again!  I didn't even notice until I had it in hand that this is a "Christmas" parallel, #'d 12/25, I've sure Gavin of Baseball Card Breakdown will love that.

With Messier in hand, I've got five of these autographs and counting now, though they obviously don't crop up all that often with only 25 of each in existence.  I'm not sure how many more I'll stumble across, but I sure do love this one.

Thanks for stopping by!
Posted by shoeboxlegends at 10:37 AM

Nice! Love these buyback signatures. Haven't focused on hockey in years, but I remember back in the day, Messier was a tough autograph to get.

Great card and he is one of the all-time greats. you can't go wrong with him.

Awesome! Do you keep a count of hall of famer autos? Must be pretty high by now.